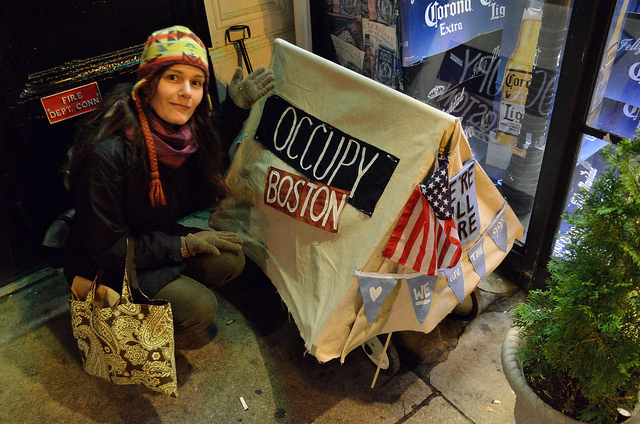 Part Two of a two-part series. Click here to read Part One.

….As a front line Occupier in one of the aforementioned large scale and suddenly camp-less metro occupations, I too am licking my wounds at the onset of Occupy’s “Valley Forge Winter” with my brethren. We are cold, scattered, fragmented, un-unified, and scrambling for numbers.

Yet, beneath the permafrost, there are signs of hope. Despite the elimination of local camps as an operation base and the arrival of winter, bells and whistles in the form of twinkle fingers, mic-checks & rowdy general assembly meetings continue to pique mainstream curiosity. Mainstream media continues to cover Occupy, both good and bad. (Insert HL Menken quote here) Numbers continue to grow, our economic wasteland country teetering on the brink of solvency continues to create new victims and Occupier everywhere continue to receive logistical and widespread community support regardless of locale.

As I type these words, de-centralized Occupy protesters are lurking everywhere. They are in foreclosed homes, trees, abandoned businesses and parks. Some of us are driving to DC, some are planning a ship blockade in Longview, Washington. Above all, we are occupying. All over the world this is happening. Before I finish this piece, another Occupier will be arrested, occupying public space.

With every passing day, each Occupation is independently arriving at the same universal conclusion: a camp from which to protest is worth fighting for. Weekly there are symbolic re-occupations, temporary re-occupations, full-blown tented re-occupations, all kinds of re-occupations. There’s been OWS (D17), Oakland (OGP, multiple), Seattle (Westlake, multiple) and Portland (multiple.) As soon as they happen they are Livestreamed, ready to inspire the rest. Each region, scattered from their original familiar camp, is regrouping and re-occupying their locality to whatever degree possible, however long possible. Community support is gauged, police resistance estimated, occupy fervor factored in, resources mobilized, weather accounted for; all while overcoming a myriad of new logistical concerns associated with decentralization and fragmentation. In the way each camp and its forced dissolution was autonomous and unique, so what’s possible “post-occupy” will also be unique given these and other locality-based variables, some out of control and influence, some within. Foreclosed home actions, farming projects slated for spring, metro cards, subsidized cheeseburger programs, daytime “re-creations,” nearby meeting places, leased warehouses, a myriad of patchwork ad hoc replacements, huge port shutdowns, marches, foreclosure stave-offs–all have succeeded, and yet, a key piece is missing…

And so we wait… for the weather to improve, for the desire to establish another camp to take firmer root, for growing numbers to sustain what we occupy. This is our Valley Forge Winter because every effort will be made to convince us we’ve “moved on” or “evolved” to something else by spring. Every persuasion and plausible argument against “camping again” will be proffered, every arm twisted by those either against us or unaware of the sheer power on so many fronts of a public occupation.

Don’t listen. Resist co-option. Follow the money. Scheme, plot and prepare to re-occupy. Again. In the meantime, for the winter, know your limitations and strengths. Occupy symbolically, fall back. Use marches, foreclosures, tent-monsters, rallies, tree sits & other strategically possible endeavors to keep Occupy in the public eye until spring. Scrape by and make do. Resist! And finally, above all else…