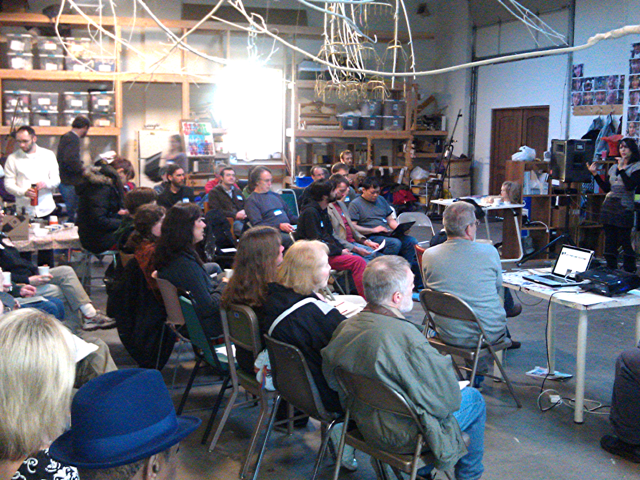 Occupy Portland held its first Legislative Action Forum on Sunday, January 8th. 67 Portlanders joined with Occupy members to identify government policies adversely affecting people and ways the movement can change them. The Forum was organized by the Solutions Committee of Occupy Portland, one of the many action groups formed to continue fighting economic injustice and the power of wealth to influence our once-democratic government.

The participants identified 38 different policies that are detrimental to society and our livelihoods. Issues ranged from preventing privatization of public assets like water to campaign finance reform and halting the militarization of our police forces. The Forum then broke out into eight broad category groups to brainstorm the different approaches to solving such problems. These groups were health and food policy, education reform, police oversight and accountability, the environment, finance and banking (including a state bank, moving our money and bailouts), debt (Including foreclosures and student debt) and ‘Reclaiming our democracy’ (including campaign finance reform, revolving door policies, political accountability, media bias).

The Forum was structured in the movement’s non-hierarchical, crowd-sourcing approach of addressing problems and building solutions in a participatory manner. “The majority of attendees had been waiting on the sidelines to become more involved in the movement, and its been great to see mayoral candidate Jefferson Smith, Jo Ann Hardesty and Woodrow Boardnax taking part in the Forum as well,” said Occupy Portland organizer John Springer.

The ideas generated during the Forum will be utilized to shape the group’s 2012 policy initiatives, with more such events set to happen in the future. “This Forum did its job in highlighting our society’s current problems, spurring discussions and getting people with similar interests connected. It also plays a deeper role in showing that a new way of organizing is possible, where the people craft and pursue their own concerns, rather than it being a top-down model,” said Springer.

Most of the participants agreed to continue working with the committee to define legislative and legal solutions that increase the power of people over wealth in our democracy.

The Solutions Committee has already been working with Move To Amend and Alliance for Democracy to strengthen the language in a Portland city resolution to deny corporations the same rights as individuals. A postcard drive and petition have already garnered more than 1500 signatures to this effect.

The testimony and vote on this resolution will be on January 12th, where the public is encouraged to attend and have their voice heard. It has also worked on issues such as giving communities the right to define their own regulations, and implementing instant-runoff voting in local elections, which allows for more representative, participatory and cheaper elections.

A number of other events have been organized in conjunction with these initiatives. A nationwide day of action to occupy the courts is planned for January 20, which is the one-year anniversary of the Citizens United decision that gives wealthy corporations and individuals the ability to overwhelm our democracy with money.

On January 27 & 28 Occupy Portland will be hosting forums or candidates of Portland’s Mayor and City Commissioners, and Occupy groups from across Oregon are planning an occupation at the legislature for February.