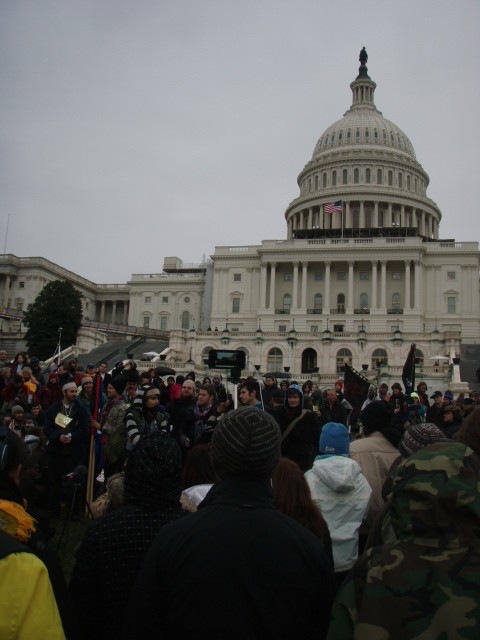 Why would a movement that has found its strength in direct democracy sudden show up on Congress’ door step? Why would people, finding their voices in their own communities after never having heard it before through the national media and political structure, suddenly come to the United States’ capital city? Why would groups that have formed on the basis of mutual aid, to fill the voids in the social structures of our towns and cities left by the vacuums of governance that we only hear from in election years, travel from all points of the continent to broadcast their message within earshot of those very leaders?

Well, it certainly isn’t because we expect anyone in this city to listen to us.

We’ve learned that lesson all too well. We can tell when people just want us to leave them alone–and we’re more than willing to do it. Most of us want nothing to do with our so-called “representatives”. When they play their ads on TV, we change the channel. When they give speeches, promising and lying in the same breath, we go talk amongst ourselves. When they ask us to help them bring about meaningful change, we shake our heads and roll our eyes, and then go back to organizing in our communities, just as we always have, and just as we always will. So-called “representatives”, defending our “rights”. These are the people who are at this very minute discussing the SOPA legislation that would censor the very means by which this news organization is able to bring you news of the people’s actions. We know that the marble structure on that hill in front of us is hollow. We know it is only a symbol–and a very expensive one at that.

No, there will never be any classes taught in that big, empty building. Nothing will ever be made in those halls. There will never be any ideas that come out of it. There will only be bills issued. Bills for the wars they fight on our paychecks. Bills levied against our futures, and our children’s futures. Bills issued by their consulting agencies, payable by their own expense accounts. The real politics going on in this country? It’s happening on the grass out front.

And that is why we’re here. We’re here to remind ourselves of the difference between us and them. We’re here to practice what we’re preaching, while we preach it. This is what we do all the time–we organize, discuss, plan, dream, design, and make things. But now we are doing it on their lawn. On the pristine country club of politics in the United States, we are having our general assembly. The difference is palpable. In there, are white men in suits. Out here, there are people of every age, color, and part of life on this continent. In there, they try to take away out rights. Out here, we make our rights real by exercising them. In there, they talk, and schmooze, and live fat lives on our tax dollars. Out here we stand in the cold, we work and type until our hands are numb, and we talk late into the night not only about what sort of society we want to make, but how we’re going to go about making it.

We’re getting better at it. Little by little. I’ve heard many new ideas here today at Occupy Congress. As many cities as are represented, there are just as many plans for the way forward. And not one of them mentioned a public park. For each community, founded by activists who merely showed up at the same time and the same place, there is a new plan. In the sunlight in front of the Capitol, we acted out a performance, that is slowly becoming not only a demonstration, but the real deal. Occupying is our new life. We will make our constant politics in this way, from now on. There will not one “famous speaker”. There will not one petition for our votes. There will not be a convention, for handing out cheap trinkets or drafting meaningless documents. Instead, there will be an assembly–a procedure of pure democracy, conducted only by the people who wanted it to happen, affecting only the people who wanted to be part of it. This assembly will be broadcast far and wide, to those who are listening, waiting for something new, who know that it is coming. And then, we will depart. We will leave the assembly, and go off and accomplish the goals that we set out to do.

Occupying Congress is about this: there is no Congress. There is only us.

5 comments for “Occupy Congress: Why Congress?”