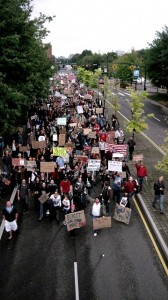 I hate committee meetings. I always have the same recurring fantasy when stuck in another of these seemingly endless rant fests: a kindly infiltrator sneaks up behind me and pumps a round of double-aught buck into the back of my melon. I picture my head exploding like a piñata filled with raspberry jelly, finally interrupting the mind-numbing procession of speakers waxing philosophical about what should be yes or no questions. In my fantasy, my body always falls right in the middle of the room with a wet thud, like an upside down exclamation point, causing everyone to lapse into shocked, but merciful, silence. In this fantasy that is endlessly replayed like a scrolling marquee whenever I am in a committee meeting, my twinkle-fingering spirit hovers over the crowd watching as it takes a moment to digest the spaghetti-headed corpse lying at their feet. “Shut them up!”, my eternally-free spirit thinks at this point, immediately before the bee swarm of incessantly droning voices around me drags me back to reality. Then, even in my fantasy, the facilitator takes a stack and begins the discussion of the best way to mop up the mess, the philosophical implications of using a mop that isn’t certified as cruelty free, etc. Each speaker beginning their monologue with the words, “I think that we should…”, “I would like to see…”, or “We should begin to…”

“Jesus…”, my disembodied spirit shouts to deaf ears, “the next person that goes off-topic to drone on for twenty minutes about their philosophy of life should be whipped mercilessly with a tube sock full of dog shit; that’s what I think!” But, just like real life, the tedious onslaught of irrelevant dissertations continues like an avalanche.

This whole phenomenon of political death by committee gives me a new perspective into A Clockwork Orange, which I used to view as a commentary on the conflicting acceptance of sociopathy among the powerful and the powerless. Now I see it as a movie filled with infinitely less heinous tortures than committee meetings. If only I could just spend a few hours with my eyelids pried open and suffering under chemically induced horrors, at least I’d have something to tell the neighbors about when I get home. I’d prefer almost any torture to a committee meeting. I’d rather someone use a rubber mallet to pound a wine bottle full of fire ants up my ass than attend another committee meeting.

I have learned things from committee meetings, however. I’ve learned, after innumerable hours during meetings attempting it, that I can’t move things with my mind. At first, I’d attempt telekinesis, imagining that it gave me a serious, contemplative look that everyone else mistook for paying attention. After I failed to move even the smallest object through telekinesis, or at least I think I failed (stare at anything long enough and you’ll at least think you saw it move), I decided to stare at people turned the other way to see if they could sense me staring at them. I’ve found that the longer a meeting lasts, the more psychically-aware-of-others-staring-at-them a person becomes. About a thousand times each meeting, I’ll try to psychically project the thought, “No one gives a shit!” to see whether the speaker picks up on it. That never works, and I’ve invested every fiber of my being into the attempt, so I know I’m not just doing it wrong. Even stating out loud, “No one gives a shit!” barely fazes them. One moon-eyed true believer after the other plods along delivering what they believe to be the most important monologue the world has ever heard, completely oblivious to the fact that absolutely no progress is made regarding the actual question we were supposed to be addressing, which is invariably some tedious bit of bureaucratic minutia like writing a mission statement, assigning committee roles, debating the relative merits of using the word “rules” vs “laws” or blah blah blah blah, on and on and on and… just stab me in the fucking head with a pencil and end it already.

For the life of me, I can’t see why dozens of irrelevant committees should spend hundreds of hours per week dancing around the one word that we’re all thinking but are afraid to say. After the initial flurry of activity caused by the brave men and women of Tunisia, Egypt, and of Zuccotti Park, we are again reduced to writing letters to our Congressmen or city council, forgetting for a moment that they don’t give a flying fuck about us, much less our semi-literate correspondence. We are holding small marches and actions to provide outings for our community to make us feel powerful while the masses forget about us. We’ve formed corporations and legal entities to represent us and are now threatening each other with legal action over ownership of the names. We’ve taken our minds off the big picture because we’re still afraid to commit to it. That’s the basis of our endless discussion during committee, a circle-jerk attempting to magically pave an easy path to freedom by endless conversation alone. Deep down, we think that if we could just form the right bureaucracy, the right system, then all the hard answers will take care of themselves. We’re wrong. Our posturing and bickering are aimless.

The media says that Occupy doesn’t have a point. They say that we don’t have a coherent message. This isn’t true, we do have a point. We have a very simple objective. It’s not the lack of a unified message or objective that the world has seen, it’s the hesitance on our part to accept it, the simple human decency that we possess which has made us hesitant to state a demand so severe. Despite all the evidence before our eyes, we want to believe that our institutions, culture, and society as we know it can be salvaged by its own strengths and capability. We’ve seen the writing on the wall, but we’ve been too timid to accept it ourselves, much less shout it from the rooftops. We’ve been patient, and we’ve shown restraint, and our patience and restraint have been rewarded by the National Defense Authorization act, a rare bi-partisan show of support for a bill declaring our homes the battlefield and ourselves terrorists in a war upon the American people.

In response to this monstrous and unforgivable injustice, we now express the demand that our decency made us hesitant to express. This is not the demand of the Occupy movement, or one group of partisans in the false left/right dichotomy, but of the American people, a people that were born free and though reduced to slavery by a psychotic government in the hands of International Finance, will fight to the very last breath to regain our freedom. We intend to become the force of the American people to overthrow the corrupt and genocidal regime that has usurped all power and reduced the American people to landless serfs.

Here is our demand: revolution.

Working towards reform is fine because we should use whatever tools that are available, but we have to possess the courage to plainly state that our government and society is corrupt beyond redemption and that we want to see our elected representatives and the bankers that own them locked in the third world dungeons that they have now expressed the desire to legally cart us off to. Our president is the worst sort of criminal, as was the president before him, and as are our senators and congressmen. They are nothing but murdering thugs, flunkies doing the bidding of financial psychopaths. Pretending that we have any capacity for meaningful change within the confines of this current system is a monstrous lie that we, if we expect to be agents of change, can’t hoodwink the public into supporting.

“Revolution” is the word dancing just at the edge of vision in the public imagination, and we need to bring it into full focus. If the public hears the word “revolution” from us, they’ll support us. If we get bogged down only seeking “reforms” then we’ll just sink into the quagmire of partisan rhetoric that will leave the average American confused and uninterested.

When OWS took Zuccotti Park, they were, whether they knew it or not, taking the first step towards emancipation, and that emancipation lies in the overthrow of our illegitimate government, not begging that psychotic power structure to be nice to us.

Do we need a more eco-friendly message on our webpage? No, we need a revolution. Do we need to take our parks back? No, we need a revolution to take everything back.
Our government and economy is illegitimate and corrupt beyond redemption. We refuse to submit to its rule. All the elected cronies and modern robber barons that are raping the entire globe under the facade of legal legitimacy are the enemy of the people. We no longer submit to the slavery of their laws or courts. A government that declares its own populace to be enemies, and its own commonwealth a field of battle, has lost all right to existence. Our self-proclaimed masters are criminals that merit only the gallows or the dungeon, and we won’t rest until we have our freedom and our current rulers are shackled in front of our judges answering for their crimes against our laws.

Only through revolution can we hope to create a new world without the slave masters of the old. Attempting to include the illegitimate crooks of government and finance in a better world built through reform is an act of mercy that their actions don’t merit. We’ll create our government, constructed by and for us, and that new government will declare all existing interest on all debt to be illegitimate. It will declare that there are no persons other than human beings, that the “corporate person” is a fictitious species that endangers all life on earth and therefore is to be immediately and mercilessly exterminated from the face of the planet. It will declare that all banks are criminal entities, all contracts with banks are null and void, all property held by banks is the property of the people, and all debt to banks is permanently erased.

This is our path forward, and we don’t need endless committee meetings to reach it, all we have to do is choose to take it.

2 comments for “Scan This”