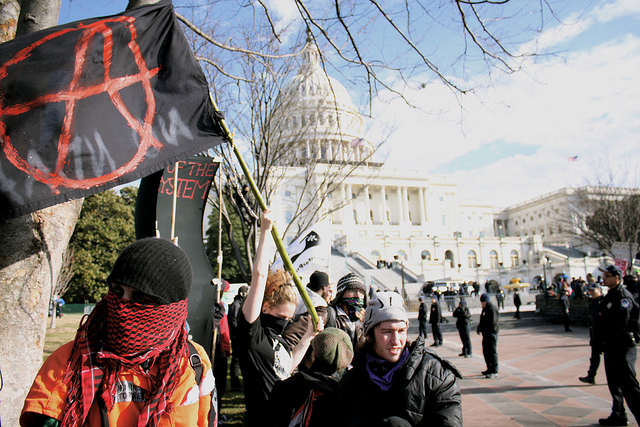 When this country was founded, it was based on democracy, freedom, and an opportunity to live what eventually became known as the “American Dream”. The direction that our elected leaders have taken us in the last few decades goes away from democracy in favor of corporate domination, with the ultimate goal of profit maximization at any cost. If we don’t do something soon, the dream could become a nightmare.

The standard of living in this country is going down and will continue to trend downward unless changes are made. The gap between the rich and middle class will widen and eventually lead to just two classes–the rich and the poor. Others more insightful than I have made plenty of common sense arguments, yet we still face big problems. I have chosen a provocative title and am going to make some hypothetical suggestions that could happen if we don’t change some things.

A majority of our politicians have told us for years that unfettered, unregulated free trade with all countries in the world is good for us and we should embrace it. The United States is affiliated with the World Trade Organization (WTO). How can this be? Our country could be renamed the United Corporations of America. Free trade is great for corporations. They can buy foreign goods made far cheaper than their American counterparts, and in turn increase their profits immensely. But what about the working families in this country? What about workers elsewhere? Are they just another commodity that can be bought and sold to the highest bidder? Some people think so. It sounds a little like slavery, doesn’t it? It appears that in order to survive, U.S. workers need to learn to accept less and less. Do we need to model ourselves after Global South countries to be competitive? Within the “United Corporations of America” we would actually be better off if we eliminated citizen voting for senators and representatives. Just take the top 100 corporations and give them each one senatorial seat. At least then, for example, the senator from Intel would actually have to make a good, common-sense argument to convince the senator from Nike about the benefits of a proposed bill.

The WTO wants to eliminate subsidies on domestic industries. Their Financial Services Agreement calls for governments to stay away from regulating banks and financial institutions. We must change rules like this that threaten to extend our current economic crisis. According to Trade Watch, “The Bush Administration led a push to expand financial deregulation in the ongoing WTO negotiations”. Now we have the option to wait and see if the Obama Administration will take action to remove deregulation commitments that will blight attempts to remedy our financial crisis. But instead of waiting, be part of the solution and participate. People worldwide will be rallying against the WTO in the next two months. The G8 are meeting once again. This time, they are taking over Chicago from May 18-May 23rd. While the meeting rooms will be full of representatives from the WTO, the streets will be full of protest.

Our corporations and politicians are responsible for exporting jobs out of our country, and our politicians ponder how to maintain government services with a shrinking tax base. Truth is, we will need to eliminate most programs, because the tax base is doomed. Third world countries don’t have US style social services, if any at all. The US welfare program will need to be downsized severely or possibly eliminated. Workers in third world countries have low or no medical or retirement benefits, and certainly not state sponsored welfare. In third world countries, if you get sick and have no money to get medical help, tough it out or die. And retirement? In those countries you work as long as you are able and then move in with your children.

Another way to save on this tax crunch is to eliminate government. For example, the Environmental Protection Agency or a state’s Department of Environmental Quality might need to be eliminated. How can we expect U.S. corporations to compete with foreign corporations with our burdensome environmental laws? Environmental regulations cut into profits. Publicly funded education might come to an end as well. We are moving towards a two-class society: the rich and the poor. The rich are the only ones who will need education and they can pay for it themselves. Public education could be eliminated in favor of reinstating child labor. After all, we need to remain competitive in the third world. We should also prepare to reenact some sort of federal system of slavery because our dwindling domestic corporations are competing against third world dictatorial countries that, in essence, have not outlawed slavery.

How much government do we really need? Lets see, in Portland we have federal, state, county, city and metro arms of government. We should be able to reduce down to one or maybe two agencies of government. This will save all kinds of tax money, and also totally revamp the tax system. We ought to prepare our local government to rely less on income taxes and property taxes because ordinary income and property ownership by anyone but the rich is going to dwindle. We should institute more business taxes to fund these downsized government services. Maybe we can look to third world countries as a model. We can do it the same way they do it, which is to say, not at all.

These suggestions sound rather outrageous, don’t they? Some of them may actually come to pass if we don’t do something. Corporations have way too much influence in our political system. Meaningful campaign finance reform would create a political environment that would be conducive to some positive improvements regarding the direction our country is headed. Under the current system, corporate interests contribute to many political campaigns, and when a vote in Congress is taken, it is not based on what is good for average taxpaying citizens. It is based on what is best for those corporate interests.

Our political system has evolved into one that requires a lot of money for survival. As politicians rise to higher offices, more and more campaign finances become necessary. It has become a corrupt system of government. I am not saying that all politicians are corrupt. That I do not believe, but I think we have enough corruption in politics to be detrimental to our people and country. Many political offices go to either the wealthy or to those beholden to the wealthy. We would be much better off with average citizen legislators as opposed to career politicians. I believe that many people enter a political life with genuine, democratic, altruistic goals for our society only to be overcome by the financial realities of competing in and winning elections.

I believe we should limit the length of political campaigns, equalize financial resources and devise a non-partisan primary and general election system that insures a democratic majority for those who are victorious. We may also want to limit the amount spent on campaigns, restrict party financing and ban negative campaigning and eliminate paid lobbyists. If we don’t enact meaningful Campaign Finance Reform, I do not see how conditions will improve for the middle class. We will continue the race to the bottom and eventually become one of the third world countries and will need a massive upheaval or a revolution to avoid the “American Nightmare”.

When I was growing up, every time I questioned my parents about a decision involving education or career choices, then would indicate that they just wanted me to “have it better than they did”. Unfortunately, we are heading in a direction where I might have to tell my children or grandchildren “I just hope the wheels don’t come off this wagon too soon.” That’s not the kind of legacy that I am interested in handing to my descendants.

5 comments for “American Nightmare: How The WTO Is Impoverishing The US”