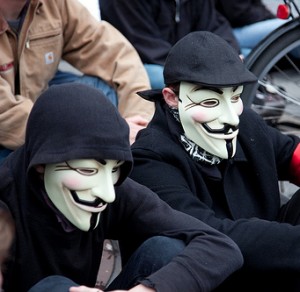 A bloodless battle rages over the interweb netterspace. Where once proud but downtrodden citizens picked up their guns and pointed them directly at those who wished them ill, now we see masked avengers who, behind closed doors, fire millions of tiny ping packages at their enemies. Along with publicly releasing the private data of the 1% , modern day munitions come in the form of DDoS attacks as site after site is taken down sending shivers of fear down the spines of those who know they’ve done something gravely wrong and shivers of excitement as we oppressed sit feeling nearly helpless. The first time I felt these shivers was in an excellently executed attack against the Westboro Baptist Church. You know, the ones who protest outside of the funerals of US servicemen who served their country proudly but happened to also be gay?

Anonymous has chosen the Distributed Denial of Service (DDoS) attack one of its more obvious weapons against those who control corporations, governments, and special interest groups. An attack as decentralized as this makes it nearly impossible to figure out how to stop it.

The way a DDoS attack works is that it either consumes all of the victim server’s resources until only a sad error page shows or it causes the server to reset itself. Although this method of using the internet has been deemed “illegal” by the Internet Architecture Board, Anonymous has yet to be deterred from using this preferred new hacking method. But who is the Internet Architecture Board and why do they get to decide what’s illegal on the intertubes?

The IAB is a committee charged with oversight of the technical and engineering development of the Internet by the Internet Society (ISOC). Initially, the IAB was formed by the US Govt after Al Gore invented the internet. But soon the internet grew out of the hands of the US and into the international community. In the days of dial-up and having to wait several seconds to minutes while listening to the “kkkkssshhcchhh zzzzz jjjjjjjjjssshshhhhh……….WELCOME” of AOL, an international movement was organizing to take control of the internet out of the hands of the United States government (an excellent idea in my opinion based on how they have proven incapable of even handling simple things like money), and into the hands of an international non-profit called the Internet Society. The Internet Society formed in 1992 and has since spawned over 90 chapters throughout the world. One of its purposes being is to provide a corporate structure to support the Internet standards development process. It’s mission is “to assure the open development, evolution and use of the Internet for the benefit of all people throughout the world”.

That mission statement is extremely broad. Do Hollywood profits out-benefit the freedom to access a clip of a movie on YouTube? Does my home-made montage with a popular song in the background violate the musician’s right to get royalties? The internet of today is the Wild West with ethical rules that only true-believers adhere to. Do we really need the IAB to create and enforce the laws? Does this beautiful, decentralized network of information need a sheriff?

We live in a world where money talks. Although the altruistic sounding mission of the Internet Society looks benevolent, the true string-pullers would like to see the internet functioning for their maximum benefit. Around the world and at home, internet-freedom-limiting laws are being written by organizations like the Motion Picture Association of America. With the potential passage of SOPA, PIPA, ACTA and now the new OPEN, the Internet Society seems to be sitting quietly as our internet freedoms leech from us like the nutrients in our topsoil. Although a mobilized “awareness campaign” was brought on by the likes of Google, Wikipedia, Reddit, WordPress, and a number of other incredibly popular websites, their reformist approach does nothing except send a clear message of “we don’t like it but all we can do is tell you that.”

Anonymous, on the other hand, goes on the offensive. Just this Wednesday, they took down the Irish Government’s websites of Defense and Justice. Minister of State with responsibility for Research & Innovation Sean Sherlock described the cyber attack as an ”unjustifiable response for what is simply a move by Government to ensure that we comply with EU copyright legislation and which re-states the rights that already exist in Irish copyright law”. An unjustifiable response? The governments of the US, the EU, China, and other countries are attempting to strip us of our right to access information. This is the 21st century. In past centuries, book burning was a method of control. But the more books that were burned, the more radical information became printed and distributed without the help of the 1%. How many more websites will Anonymous have to take down before our governments get the message that cinching our intertubes will only unleash a stronger, more united internet world?

The new internet is coming. Don’t fear. On June 3, 2011, the United Nations declared internet access a human right. The organization, A Human Right is working on just that. From the frontpage of A Human Right: “7 out of 10 people do not have internet access. The Network we envision will fill in the coverage gap granting equal access to all. The idea is not new, but our perspective is: information can no longer come at a cost. 5 billion disconnected people will have equal access to a ubiquitous, free, and reliable information service….Because access to information is a human right.” Now the organization A Human Right and the United Nations have teamed up to bring internet to everyone. As soon as A Human Right succeeds in creating this free internet system, companies like Comcast will have no longer be able to deny the ISPs of places like the Pirate Bay. There will be nothing in it for them. Another bright star in webspace is Tor. From their website: “Tor protects you by bouncing your communications around a distributed network of relays run by volunteers all around the world: it prevents somebody watching your Internet connection from learning what sites you visit, and it prevents the sites you visit from learning your physical location. Tor works with many of your existing applications, including web browsers, instant messaging clients, remote login, and other applications based on the TCP protocol.”

So combining the opportunity for non-owned internet infrastructure and anonymous access, ACTA, SOPA, PIPA, OPEN, and all those other potential money-grabbing schemes that congress is dreaming up don’t look so harmful. And as long as Anonymous keeps the world’s evil doers on their toes, we may just have reason to keep our spirits high as we march forth into the battlefield for information freedom.