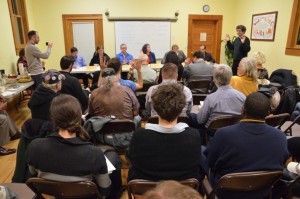 Members of the Green Party and the Oregon Progressive Party in conjunction with members of Occupy Portland held a local candidates forum Friday January 27th. The event, in a room above the People’s Co-op on SE 21st Avenue, was an opportunity for Portland mayoral candidates and city council candidates to meet, greet and discuss their political positions on a variety of topics important to members of both parties, as well as to members of occupy Portland. The format for the forum was primarily question and answer. Candidates were also given an opportunity to make a statement about themselves midway through the program.

Two of the three front running mayoral candidates, Jefferson Smith and Charlie Hales, were present, as were city commissioner position 4 candidates Steve Novick and Mark White. Amanda Fritz, who is running for Portland city commissioner, Position 1, and Patrice Anna Burke, candidate for Multnomah County commissioner, District 3, were also in attendance. Numerous questions were asked in the span of over two hours on topics ranging from the stance of the candidates to corporate personhood, to the indefinite detention of citizens made possible by the NDAA, to governmental accountability and transparency. No candidate supported corporate personhood or the indefinite detention of American citizens, while everyone supported governmental accountability.

Throughout there was very little to distinguish each candidate from the others regarding their political stances, although one might perceive definite differences in style. Steve Novick who was seated to the audiences far left came across as a seasoned campaigner, appeared definite in his answers albeit somewhat quirky. Although running for city commissioner, his focus seemed to be more on making changes at the state level. Seated next to him was Patrice Anna Burke — seeming inexperienced and admittedly nervous, she did appear to be passionate and sincere. Next came Charlie Hales, intent upon running on his former record as city councilman and though perhaps offering little in the way of new ideas. Amanda Fritz sat in the center of the panel. It was noteworthy that every time she spoke she stood up to address the crowd instead of remaining seated to speak like the other candidates. Seeming a woman of integrity, that integrity imposed a rigid code of behavior some would consider to be both a strength and a weakness. Jefferson Smith’s presentation made him appear to be a fast-talking insider whose Freudian slip early on about “why I’m running for Governor” hinted at possible aspirations well beyond mayor of Portland. Finally there was Mark White, current co-chair of the Portland charter commission. His stated platform seemed based on a common sense approach, community involvement and reliance on the charted commission he co-chairs. 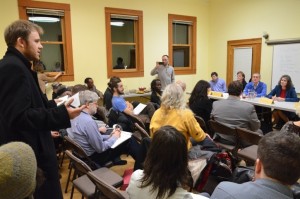 While each candidate has their own strengths and weaknesses, it seemed they have little to offer in the way of new ideas or change. None were able to provide any insights to police oversight. Charlie Hales did suggest that community policing be stressed, while Jefferson Smith and Mark White both recommended improving training to improving outcomes.

Present in the audience was the Progressive Party candidate for the special election first congressional district: Steve Reynolds. Mr. Reynolds also participated in the forum when he asked the candidates, “What will you do in your position to increase government transparency and hold check writers accountable?” Candidates answers ranged from Steve Novick proposing itemized tax bills to Jefferson Smith proposing a single 311 number to access government services. When no one actually answered the question about accountability Mr. Reynolds had posed he attempted to refocus and redirect the question without success.

The forum ran long, and ended with a question about the city and counties disaster preparedness. All candidates agreed that the city is woefully prepared should a large earthquake strike, the primary issues being a lack of money and the poor condition of the infrastructure including public schools and bridges.

Another opportunity to learn more about the local candidates is Voices of the City:  Portland’s 2012 Town Hall, happening this afternoon at PSU’s Hoffman Hall, from 1-4 pm.  More information is at http://portlandwiki.org/Portland_Town_Hall_-_28_Jan_2012.

5 comments for “Observations on the Portland Local Candidate’s Forum”