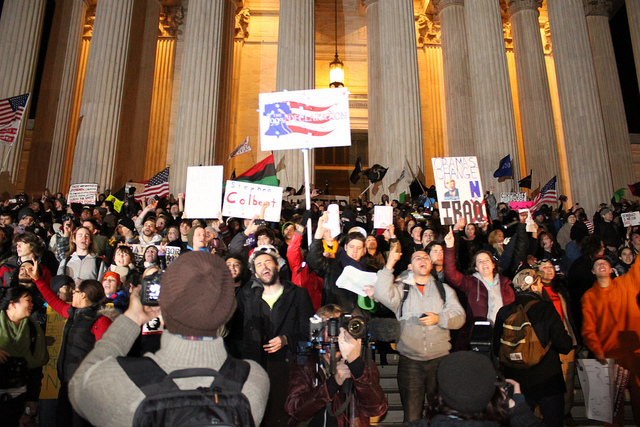 The Supreme Court made a ruling on the second landmark First Amendment case in three years—Hosanna-Tabor Evangelical Lutheran Church and School v. EEOC. On 11 January 2012, the Court’s unanimous decision on this case has further secured the rights of corporations hitherto enjoyed only by individual American citizens.

The ruling comes on the heels of the of the controversial judgement in the 21 January 2010 case Citizens United v. FEC, which undermined one hundred years of the legal distinctions between the rights of individuals and the rights of corporations in influencing elections.

This case was the first time that the right of a religious institution to hire and fire its ministers at will —ministerial exception— was pitted against the rights for disabled employees to receive fair employment opportunities and treatment under the Americans with Disabilities Act.

Chief Justice Roberts wrote: “Until today, we have not had occasion to consider whether this freedom of a religious organization to select its ministers is implicated by a suit alleging discrimination in employment.”

The suit was first brought against Hosanna-Tabor Evangelical Lutheran Church and School, Redford, Mich. by the Equal Employment Opportunity Commission, after a former teacher at the school, Cheryl Perich, 35, brought allegations against the school claiming that she had been fired over her taking a leave of absence for a medical condition.

Perich taught fourth grade at Hosanna-Tabor in 2003-2004, but in June 2004 she contracted narcolepsy. She spent the 2004 fall semester on medical leave with the expectation that she would be able to return to her job once she recuperated. “On January 27, 2005, however, Perich notified the school principal, Stacey Hoeft, that she would be able to report to work the following month. Hoeft responded that the school had already contracted with a… teacher to fill Perich’s position for the remainder of the school year.”

Three days later at the Hosanna-Tabor congregational meeting Hoeft and other members of the school’s administration claimed that “Perich was unlikely to be physically capable of returning to work that school year or the next.” To which the congregation offered to pay some of Perich’s medical premiums in return for her resignation.

Perich didn’t resign, and after the school refused to let her return to work on the date her doctor cleared her to teach, 22 February 2005, she brought the aforementioned charge against Hosanna-Tabor with the EEOC.

The difficulty in this case arose out of the fact that the Missouri Synod, to which Hosanna-Tabor belongs, possesses two classifications of teachers—“lay” and “called.” The “lay” teachers perform the duties of any other teacher in any school environment without performing any religious function. The “called” teachers on the other hand are required to have received specific religious training and perform minor religious instruction and the official title for the “called” teachers is Minister of Religion-Commissioned.

Due to the fact that Perich’s official title was minister, that she performed a religious function, and that she had claimed tax privileges under ministerial exception the Supreme Court ruled in favor of Hosanna-Tabor Church and School against the EEOC, finding that ministerial exception precludes the application of the ADA in Perich’s case.

At first glance it looks like Hosanna-Tabor further defines the roles of church and state, but that barely touches the surface.

In a diverse society with a plethora of religious traditions each defining the ministerial role in slightly different ways and where state oversight by licensing ministers is prohibited, what constitutes a minister? This decision held that the respondent Cheryl Perich possessed “ministerial exclusion” because she performed religious duties for approximately 45 minutes a day.

Neither Hosanna-Tabor nor the Missouri Synod was asked to demonstrate the importance of Perich’s role in the practice of the Lutheran faith. All the court wanted was proof of a ministerial title with specific qualifications and proof of religious function without regards for the historic tradition of the faith.# The burden of proof, therefore, lay with the individual and not the organization.

Ministers under common law are not employees; rather, they are self-employed persons contracting their services to a congregation, which is reflected in things like their tax status. The understood assumption is that a minister has the leverage and ability to negotiate for his or her own interests of a self-employed contractor.

Cheryl Perich’s position at Hosanna-Tabor cannot in any way be described as a self-employed contractor. She was an employee at a school, and with the Hosanna-Tabor case anti-discrimination laws cease to be universally applicable to employees of religious institutions, since the Court has ruled that some employees can be classified as ministers.

However, the outrage extends beyond the nuances of religious terminology and the practice of ritual. All employees of religious institutions are at risk. Names, ceremonies, and functions no matter how minor can be altered to fit within the framework of this brand-new loophole.

How difficult is it to change the name of a church-school janitor to sexton-minister, institute a consecration ceremony, and require that he or she pray at some point during his or her working day? Under Hosanna-Tabor this person would legally be a religious minister and entitled to ministerial exception, and all the discrimination that it entails. ADA exists to protect the rights of the employees against the possible caprices of employers, but if you are an employee of a religious organization its safeguards are no longer necessarily for you.

The law has given up the right to judge who is an employee and who is an independent contractor in favor of the unsubstantiated decisions of the private religious organizations which hire these people. Furthermore, these corporations can hide behind the thin veil of the freedom to practice their religion without the interference of the state to call an employee a minister. This court decision is a mockery of the Separation of Church and State and exposes the hollowness of US labor law.

It is an outrage that just two years after Citizens United that this Court should repeat and reinforce the same injustice for a second time.

In his concurring opinion to Citizens United Justice Scalia expresses the logic behind these two rulings: “[T]o exclude or impede corporate speech is to muzzle the principal agents of the modern free economy. We should celebrate rather than condemn the addition of this speech to the public debate.”

Where is justice for the private citizen?

Equality in rights without an equal means to utilize these rights is nothing more than a legal fiction disguising privilege. There is no freedom if there is not an equal playing field. Specific rights of institutions are not granted for the sole good of those institutions, but for the good of society at large.
Freedom of religion is not a carte blanch for a religious institution to govern its members as if they were not citizens of the United States; rather, it is a protection for those members (and all members of similar organizations) to enjoy the free association and practice of their religion within the framework of an institution and a set of belief through the guiding hand of rituals which are not subject to the dictates of external authority.

When the individual rights of private organizations cease to be for the good of society at large and become a justification for the suppression of the rights of others, those rights are transformed from the signs of liberty to tokens of privilege.

Privilege is the eternal enemy of freedom. Freedom is only freedom if the rights are enjoyed by one and all. Freedom to compete against outrageous odds without mediation from the Federal government has begun to pass for political dialogue. Money and privilege have replaced equality before the law. Justice is for sale, and democracy has become the plaything of those who can concentrate the most capital to achieve their goals.