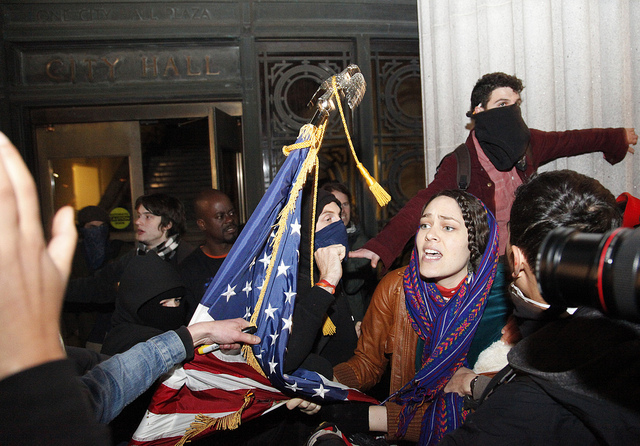 This author and this website do not advocate any specific act of violence or crime against property. This essay was crafted and published as solely a piece of rhetoric, and it ought to be interpreted as nothing else.

On the night of January 28th, protesters from Occupy Oakland entered Oakland’s City Hall, and damaged property, including burning an American flag. They did this in response to the outrageous violence committed by the city’s police force, accenting a day of unlawful arrests and persecution of over 400 protesters and media personnel for nothing more that gathering together in the street.

And yet, the mainstream media overwhelmingly made bigger news of the protesters burning of the flag, than of the violence at the hands of the city and police.

There is no symbolic act quite like burning an American flag, at least within the national borders demarcated by the government that flies this flag. Federal law makes explicit how the American flag ought to be treated, though there are no penalties for failing to follow these laws. Still, it was only in 1989 and 1990 that the Supreme Court ruled that desecration of the flag was protected speech. And powerful speech it is; while the flag codes technically prohibit the use of the American flag in advertising and appearing on clothing, these uses of the flag are widespread, while burning of the flag in protest is considered tantamount to an attack on the nation itself.

But what sort of an attack is a flag burning? It is an emotional act. Flag burning is a symbolic action of property destruction. In the case of Oakland, it occurred at the end of many hours of being penned in by heavily armed police officers, after being gassed, shot, beaten, and arrested without warrant or cause (to date, only twelve of the over four hundred arrested have been charged with a crime).

Flag burning is merely the most symbolic form of property destruction, thanks to the United States’ history of national patriotism. The breaking of windows, spraying painting walls, and other various types of vandalism and structural damage is similar property destruction, often carried out in the heat of a protest, or over the course of several protests, when police have pushed a crowd to the point at which their discipline ceases, and they begin to react.

But is property destruction only about a lack of discipline? Is it all emotional reaction? Certain advocates of non-violence would tell you so. They believe that property destruction is violence, because it is aggressive. Even though it pales in comparison to human bodies deprived of oxygen, beaten, dragged through the streets with broken bones and lacerated skin, they are of the opinion that a strategy of non-violence protest precludes any form of aggression whatsoever.

The mainstream media is typically willing to buy this logic as well, though perhaps out of a desire to minimize cost to businesses and property owners, and maximize blame upon protesters, rather than out of any morality or ethic. All too often, such as in the aftermath of this episode in the ongoing police riot in Oakland, broken windows are placed next to broken bones in media reports, as if this was quid pro quo, and property value was equivalent to human life. It is said that protesters only got what they should have expected to receive; having conspired in something so criminal as to tear down a fence, a rubber bullet to the face is the logical consequence.

The media does not invent this brutal equivalence on their own. Interestingly enough, the equivalence between violence and property destruction is as inimical to American history as the symbolic value of the American flag. Since before the Revolutionary War, the rich have made it clear that violating the valuable integrity of property is much more damaging than the suffering of the working classes in the street. In fact, the Declaration of Independence is based on such an equivalence. To this day, to break a window is worse a crime than a cop beating a person in the street. This dynamic is foundational to the American State, and its history.

In actuality, property destruction is not generally an emotional response. It is a very logical activity, conducted by those who have nothing, against those who hold everything. Owning property is not merely “having stuff”. It is controlling the very means of the ebb and flow of society, and by doing so, affecting political power as the moon does the tides. 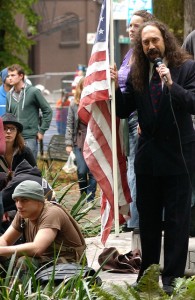 In pre-Revolutionary times, things were very much as they are today, with a minority of the population holding the majority of the wealth. In Boston in the 1770s, the top five percent of taxpayers controlled 49% of the taxable assets (60). Such accumulation of wealth means that a few people have such quantities of it, as to make the “stuff” itself meaningless, except as societal means to control those who have, by comparison, nothing. And so, the action that the rest of the people must take to fix this state of affairs is obvious. The summer of 1765, after the Stamp Act was passed, a crowd took this logical activity upon themselves, attacking…

…the home of Thomas Hutchinson, symbol of the rich elite who ruled the colonies in the name of England. They smashed up his house with axes, drank the wine in his wine cellar, and looted the house of its furniture and other objects. A report by colony officials to England said that this was part of a larger scheme in which the houses of fifteen rich people were to be destroyed, as part of ‘a War of Plunder, of general levelling and taking away the Distinction of rich and poor.’ (61)

This same year, a writer in the New York Gazette would put the argument in terms that, while in language several hundred years old, is in rhetoric that any Occupier would understand today:

“Is it equitable that 99, rather 999, should suffer for the Extravagance or Grandeur of one, especially when it is considered that men frequently owe their Wealth to the impoverishment of their Neighbors?” (62)

But while the rhetoric is simple, the distinction between the “haves” and “have-nots” is not so cut and dry. There is a middle ground: people who owned a bit of property, and while resenting the power of the truly rich, also feared losing what property they had. It is not quite accurate to call them the middle class. But they were a sort of bourgeoisie, who wanted to utilize the anger of the poor for their own benefit, but at the same time, control it so it wouldn’t turn against them. A small political group of skilled laborers and shop-owners in Boston–the so-called Loyal Nine–organized a march in August of 1765 to protest the Stamp Act. The protest was lead by small number of master craftsmen, but majority of the crowd were ship-workers, mechanics, and apprentices. The planned protest first burned the stamp-master in effigy…

Aghast at the poor attempting to right the obvious wrongs before their eyes, these gentlemen organized boycotts to protest future taxes, but deplored property destruction. “No Mobs or Tumult, let the Persons and Properties of your most inveterate Enemies be safe,” they said (66). Even after the Boston Massacre-when British troops gunned down workers in the street-groups such as the Sons of Liberty, formed among the wealthiest colonists opposed to England, made very clear their “great abhorrence” of lawlessness, and opposed “all riots or unlawful assemblies tending to the disturbance of the public tranquility,” (68). Law and order, peace and non-violence: these terms were defined by the wealthy. “Peace” was what they decided to be safest for them and their property. These definitions are an insult. They absolutely ignore the great violence being done to the working classes in the streets by their lack of property, and by the consolidation of all property in the hands of the few. And yet, because the speeches are made by such groups, and the media is their creation, these are the definitions that have come to be common.

And therefore, when the revolutionary fervor had reached its climax and the Declaration of Independence was written, it would be a document that would make sure that the rights that are unalienable are only abstract rights of “liberty” and “happiness”. These abstracted ideas, drawn from the ideas popular with the gentry, are all too common notions of “peace” and “order”. It would be a declaration of the self-evident truth of unequal property ownership, indeed, not mentioning property a single time in the entire text. Written by Thomas Jefferson, a slave owner and wealthy landowner, the Declaration would take the logical aggression of the powerless against the means by which they oppressed, and turn it inside out into a new nationalism. This nationalism would only serve to get the workers killed, conscripted into the military, to fight the propertied class’ battles against a foreign crown. It would only create flags for waving, rather than give the majority of the population any real political power. To this day, the American State maintains these values, and still holds the value of property over people as self-evident. And we are still beaten and shot in the streets.

So what is that State’s legacy? It is the flag–as a symbol of what is missing, a limp replacement for what they continue to steal. The legacy is the bosses and the owners who write Declarations and give us a banner, while taking our freedom of speech. It is a history of nationalism, as a stand-in for a responsible economy. It is many hundreds of years over which those with property continue to wield social and political power over those without it. It is the continued expansion of a police force and an army, the single purpose of which is to reinforce the value of that property, and to maintain that power over us. And it is a bourgeoisie class, that argues for “calm” and for “non-aggression”, in the face of violence and oppression. While all the while, the blows and bullets rain down upon our heads.

This is the history of the United States–and it is there, as glaringly obvious as in 1765, in every pane of glass, in every Starbucks window. It is in every sneaker in every Nike store, in every mall, in every city in America. In between the tight stitches of corporate sportswear, and in between the paving stones, our blood runs liquid, just as hot and red in Boston as in the streets of Oakland. And then it is power-washed away, so that the weekend shoppers can resume their march, carrying bags marked with the American Flag, their own little investment in the morality of Law and Order.

I say, let it burn. Let the shards of glass fall to the sidewalk. Let the sneakers fuel the fire, and the let the stones of the street come up into our hands.

All citations taken from the chapter “Tyranny is Tyranny”, in A People’s History of the United States, by Howard Zinn.

3 comments for “On the History of a Burned American Flag”