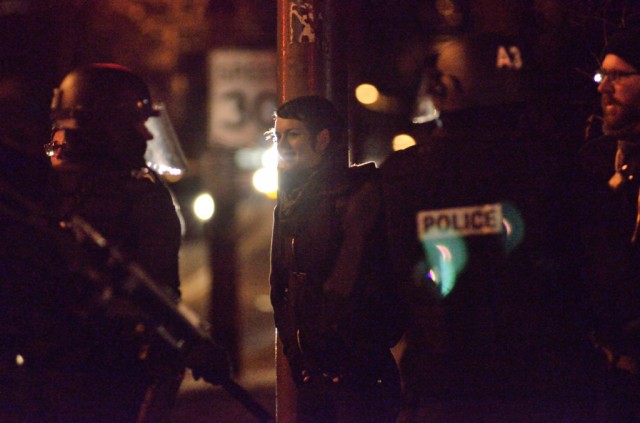 Nothing in life is sure but the luck goes to those who prepare. This is something of a long shot given the recalcitrance of the city council to do much about police brutality, but with inaction you have zero chance, nil, nada, diddlysquat, empty hands, zilch. By standing up you have a chance to change the way Portland Police “interact” with peaceful protesters. You have a chance the make the streets safer.

On February 22 at 6pm there will be a hearing of the Charter Review Commission (aka CRC, not to be confused with another CRC) on the second floor of the Portland Building (the one with Portlandia on it) at 1120 SW 5th Ave. The CRC takes recommendations to amend the city charter, the rules under which the city is run. In front of the CRC are three amendments that could possibly be put on the ballot for the primary election on May 15th. At this hearing public testimony will be heard. That is where you come in. If you have firsthand experience of po-po brutality or even just don’t like it very much, you can come and be heard. You can try and persuade the committee members to vote in favor of putting amendments on the ballot. There are 18 members — if 15 of them vote yes the amendments are automatically placed on the ballot. If from 11 to 14 vote yes, then they will be referred to the city council where they will surely die.

There are two proposed amendments dealing with tactics. The first would prohibit the use of animals for crowd control. That means no horses, no dogs. They couldn’t use horses to push people around or to block the media from recording any wrongdoing on their part. The second would prohibit the use of chemical weapons for crowd control. No pepper spray, no tear gas. No sanctioned sadism.

The third amendment is structural. Portland Copwatch has been championing the need for police oversight to be taken away from the police. Someone else needs to be watching them other than themselves. This would have the effect of bringing police behavior out in the open, into the light, where it can be acted upon by people with actual public safety as their motivation rather than some bullies just trying to cover their asses.

The hearing on the 22nd is the last hearing before the committee votes. This is the last chance to act for this election cycle. All you have to do is carve a little time out next Wednesday and come tell your story and I know lots of you have them. Don’t let them pull this crap on anyone else. Hold them accountable for being insufferable, violent douches.