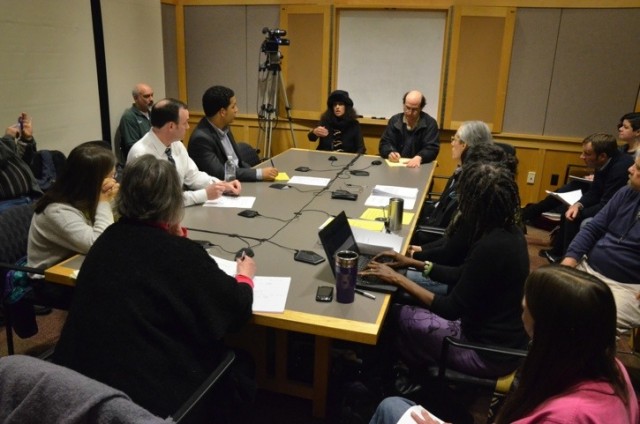 If you showed up at a seminal Occupy Portland moment—eviction day, Shemanski, Jamison—you either were a witness to, or the victim of, tactics currently being deployed by our local police state. Some people bristle at the notion that Portland does indeed constitute a police state. Portlanders, like most Americans, are understandably shaky about stepping out of that nicely recycled post-consumer cardboard box that contains their illusions of freedom. Can’t blame them—there’s a guillotine just the other side and yes, folks, it’s sharp!

Don’t believe me? Well, wander on down sometime, stand in the street and wait five minutes. Because nothing trumps experience, when it comes to understanding the shocking degree to which the authorities are constraining civilian rights. Want to exercise said constitutional rights in a park after—and sometimes even before—curfew? Be prepared to be charged by a row of animals on horses. Think it might be your duty to bear witness while others are being arrested? Sorry, folks kitted out for the apocalypse are on hand, batons, bean bags and bodies at the ready to drive you as far away as possible.

And while we’re on the subject (beating), pretty much nothing beats the irony of living in bike utopia, where cops wield two-wheelers as weapons with which to knock down demonstrators.

But let us now praise the police ‘ice cream’ truck. A delightful confection is she, from which our protect-and-servers may (with comforting regularity) tell you, fair protestor, that a failure to disperse is your ticket to chemical weapon heaven. Never mind that chemical weapon use against unarmed citizens constitutes a human rights abuse of high magnitude. Nor the fact that chemical weapons being deployed today are 4x more powerful than just one year ago. You may be sprayed and that’s just the way it is, so, please, step out of the street. This is a police state, dammit.

The ice cream truck is a formidable adversary. She and I engaged in a three-hour call and response on eviction day when I facilitated a stand off in Main Street between 200 unarmed protesters and a heck of a lot of aggressive cops. Protesters 1, Cops 0, only because we remained peaceful. Knowing that we were in a vulnerable position from which we might at any moment be violently attacked with chemical agents—that was not an enviable place to be. No demonstrator should ever have to confront this sort of brutality and—though I possess words for every occasion—it is not possible for me to adequately convey on a page the deep level of anger, despair, impotence, defiance and (thankfully and ultimately) solidarity that such an experience engenders.

It’s high, low, and medium time to demand that our police state evolve into something more, well, civil. For a start, that involves changing protocol. But how to do that from the outside, where Occupy mostly works? Do we not require some strands of accountability be unwound from within? You’d think a bit of inside tinkering is doable, given that Portland has a police Citizen Review Committee and an Independent Police Review (IPR) Division. But, oops, the Citizens Review Committee can only make noise if/when someone files a lawsuit and the IPR? MIA for the most part.

Last May, Commissioner Leonard and council cohorts tried to give the IPR more teeth (up to that point, they’d been somewhere south of loose dentures). While the polishing looks smart, this well meaning City Hall-based crew probably won’t ever be taking a meaningful bite out of the police.

Now cometh the Charter Review Commission, a group of citizen Joe/Janes currently beaming a glimmer of a ghost of a ray of light our way: They have two proposals on the table that will revise our city charter to state that the city of Portland shall use neither animals, nor chemical weapons for the purpose of crowd control.

If 15 out of 18 of the members agree to these proposals, they head onto the November ballot. If 11-14 agree, the proposals go to city council where they’ll likely be hashed into hash. How to get those 15 votes? Go down and testify at the next public opportunity: February 22, at 6pm, at 1120 SW 5th Ave. Or submit a video statement of 3 minutes or less.

Unlike some on city council, who appear to have their minds made up in advance of anything anyone may say, the charter people insist they’re listening. The fact that Jo Ann Hardesty, a long time activist, crafted the proposals makes it easier for me to believe this group’s motives are worthy.

I testified at the most recent Citizen Review Committee and also at the Charter Review hearing last Monday. Pollyanna, I—I truly believe my voice is my most powerful weapon and being given the opportunity to speak out in a public forum, whether it results in lasting change or not, certainly is better than a poke in the eye with a sharp stick. (For that we have cops.)

Our city charter is a pretty darn good place from which to reflect values our society should and must protect. I urge you to go down and insist that it be done.