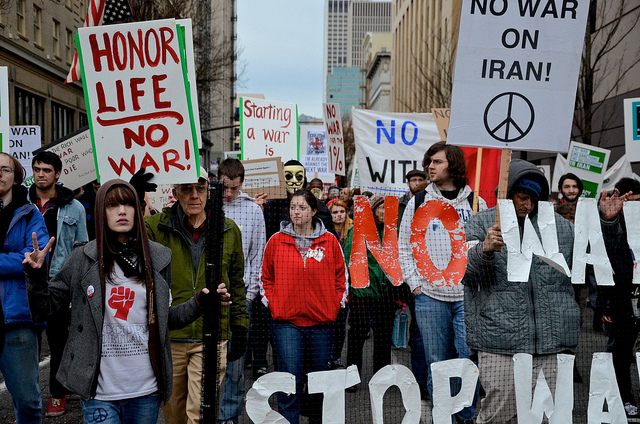 A greater negative serves no one but the established negative which the protesters are attempting to change. Shouting obscenities, throwing bottles at police, vandalizing public or private property, and burning flags all only serve to provide those police with the community sanction they need to become even more brutal than they already are. It has the effect of providing them with carte blanch to violate the civil rights of the protesters and of the general public in the name of safety and security. It feeds the politics of fear that is already so pervasive in America today. Two wrongs will never make a right. Two wrongs will only serve to destroy the rights that we still have.

When this happens, then and only then will the general public recognize the cause as true and just.

To effect real change any movement must have the support of the general public or it is doomed to failure. The Boston Massacre in 1770 galvanized the colonists and most certainly served to sanction the act of civil disobedience known as the Boston Tea Party. If the order of events had been reversed the revolution may never have happened. When John Brown raided Harper’s Ferry in 1859 he failed to start an armed revolt against slavery. He succeeded however in galvanizing the South to arm in anticipation of more raids. The North, while admiring his motives, nonetheless considered his actions to be those of a madman. On February 12, 2012, the leader of Peru’s Shining Path, a Maoist organization, was captured by Peruvian authorities. This capture may very well be the death knell of the organization which controlled a significant portion of the Peruvian countryside in it’s heyday. Due to it’s brutality however, it never succeeded in gaining the support of the people and so eventually withered and essentially has died.

Now contrast these examples of violent action with the likes of Gandhi, Martin Luther King, and Rosa Parks. All gained the support of the general public through positive action exemplifying dignity and respect. Once they garnered public support, real change resulted. Look to the examples of dignified protest in Tunisia, Egypt, and Syria. Two of the three governments have fallen and Syrian actions have almost certainly doomed it as well for it has lost the support of the majority due to it’s blatant brutality against dignified peaceful protest.

History shows repeatedly that violence only brings more violence. Unless one has the means to physically conquer one’s enemies the only way to bring about meaningful change is through passive resistance until such time that the goodwill of the people has been secured. Then, and only then, if the powers that be refuse to bend to winds of change, can the violence of revolution be justified or sustained.