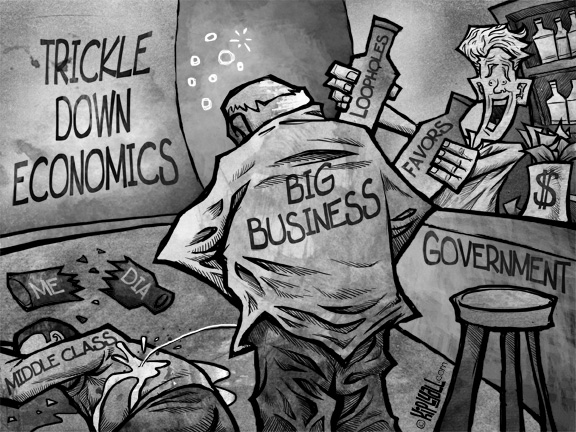 cartoon and text by Kip Lyall

Cartoon from the Occupied News Wire, originally published in the Boston Occupier.

I met a man the other day, pretty regular guy all in all except he was homeless. Just one more, one more of the millions of Americans to whom healthcare is a dream, food is a hope and even shelter is questionable. It is an American story; it is a microcosm of modern American society. And a most amazing facet of this problem is not the new poverty of millions but the invisibility of the problem.

How many of the fourteen-million now unemployed will replace unemployment checks with part-time work? The new poverty is subsidized with food stamps to the multitude which end up in the pockets of merchants. It creates a baseline economy, a brutal Dickensian society with a whiff of paternalism which says, “Feed them but don’t actually attempt to improve their lot,” merely subsidizing their poverty.

“Benefits should always be conferred gradually; and in that way they will taste better.” – Niccolo Machiavelli

Our government goes out of its way to declare an economic all clear when it is obviously not so, conjoined at the hip with a media filled with happy-talk, a media overburdened with sensationalism and infotainment, the Super Bowl, the Grammy awards, and poor Whitney, a media of distraction, by distraction and for distraction. A new Hollywood war picture has been released with real Navy Seals to further blur the line between reality and warfotainment. “Is that you John Wayne?”

Yet the plight of the average American is only barely discussed and even then only in the abstract. This is the nucleus of the movement, a lost generation of college-educated and formally middle-class “new poor.” I knew a biological engineer with a doctorate who was unemployed for almost two years. When he landed a job I asked, “better money?” He answered with a shoulder shrug meaning “no,” but there was a look of relief in his face as if he had escaped. An easily recognized reflex of relief, escape from his brush with poverty. A scientist, unemployed. This indeed isn’t your run-of-the-mill recession.

This is a depression, where anemic job and wage growth limit purchasing power which in turn fuels layoffs and low tax revenues for tax coffers. The state of California reported tax revenues a half billion dollars short of estimates for the month of January. The shortage was primarily caused by income tax revenue falling 13 percent in the fourth quarter. Those with low paying, part time jobs pay little income tax and the unemployed pay no income tax.

“Old truths have been relearned; untruths have been unlearned. We have always known that heedless self-interest was bad morals; we know now that it is bad economics. Out of the collapse of a prosperity whose builders boasted their practicality has come the conviction that in the long run economic morality pays.”
– Franklin Delano Roosevelt

Despite the knowledge gained from past depressions and even the early lessons of the current depression Federal, state and local governments continue to shed employees at record levels. In 2010, California Governor Arnold Schwarzenegger began furloughing state employees in response to a budget crisis. The cuts amounted to a 15 percent cut in pay and within just a few months the city of Sacramento went from one of the bright spots of economic activity to one of the worst. Restaurants, furniture stores, car lots and office equipment stores began to close their doors.

The Obama administration and State and Local governments have followed the Schwarzenegger path:

Nearly 400,000 less pay checks each week to bolster the economy and on the other end are the same small businesses which the politicians love to praise as job creators. They are left to deal with lower levels of government services. Local businesses have fewer customers and the nation’s children have a poorer education. This year’s cuts come in the wake of over a half million government job cuts in 2010.

Our government is cannibalizing itself to save on groceries:

“Every time you stop a school, you will have to build a jail. What you gain at one end you lose at the other. It’s like feeding a dog on his own tail. It won’t fatten the dog.”
– Mark Twain

The jobs once held by teenagers saving for a car or school are now held by adults trying to make the rent or buy the kids school shoes. Teenagers once had the most discretionary income of any age demographic in the country. They tended to buy CD’s and go to the movies and buy mag wheels for their cars, but today?

The job losses run the full spectrum from construction, technical, manufacturing and are led by retail and finance.

“Whoever conquers a free town and does not demolish it commits a great error and may expect to be ruined himself.” – Niccolo Machiavelli

The pretender Obama mimics Machiavelli and Norquist while he squeaks out left-leaning platitudes in election year shenanigans. The answer is in assisting our people.

The Obama administration has proposed a 9.1 percent cut in funds for homelessness assistance and low income housing assistance beginning in 2013, long after the election is over. The number of families doubling up in a single family homes or apartments has increased by 13 percent during Obama’s tenure. The real income of America’s working poor has increased by less than one percent during Obama’s Presidency and more than half of America’s working families pay more than 50 percent of their income for housing.

“For out of this modern civilization economic royalists carved new dynasties. New kingdoms were built upon concentration of control over material things. Through new uses of corporations, banks and securities, new machinery of industry and agriculture, of labor and capital-all undreamed of by the fathers—the whole structure of modern life was impressed into this royal service.

There was no place among this royalty for our many thousands of small business men and merchants who sought to make a worthy use of the American system of initiative and profit. They were no more free than the worker or the farmer. Even honest and progressive-minded men of wealth, aware of their obligation to their generation, could never know just where they fitted into this dynastic scheme of things.

It was natural and perhaps human that the privileged princes of these new economic dynasties, thirsting for power, reached out for control over Government itself. They created a new despotism and wrapped it in the robes of legal sanction. In its service new mercenaries sought to regiment the people, their labor, and their property. And as a result the average man once more confronts the problem that faced the Minute Man.
The hours men and women worked, the wages they received, the conditions of their labor—these had passed beyond the control of the people, and were imposed by this new industrial dictatorship. The savings of the average family, the capital of the small business man, the investments set aside for old age—other people’s money—these were tools which the new economic royalty used to dig itself in.”

The answers are that simple, they begin with jobs for our people. Public spending, infrastructure or even harmonica bands if that is what it takes to put our people back to work. We cannot therefore ignore the men and women in the park with any expectation of improvement for ourselves.

“In our personal ambitions we are individualists. But in our seeking for economic and political progress as a nation, we all go up or else all go down as one people.”
-Franklin Delano Roosevelt

The primary difference in the programs is FDR cut the bankers out of the process and Obama’s plan cuts them in.

“Remember, remember always, that all of us, and you and I especially, are descended from immigrants and revolutionists.”
– Franklin Delano Roosevelt