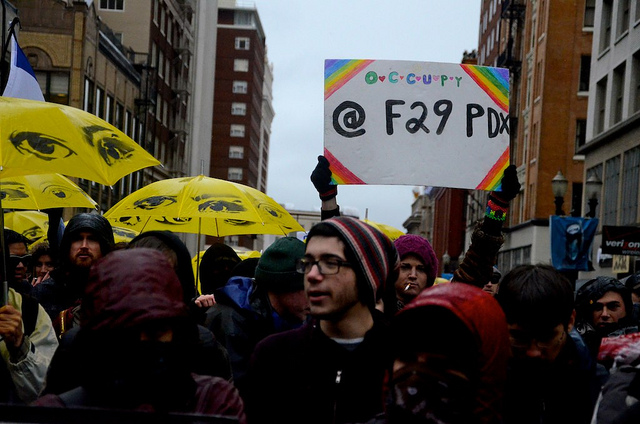 The Occupy movement’s national day of action — “Shut Down the Corporations” — is a difficult action to assess. Was the action a success or a failure? The first question that needs to be answered is, what were the action’s goals?

Many of the activists who performed civil disobedience during the day likely acted with educational motives, as many of the actions were preformed to either expose corporate gerrymandering of the political process or other unethical business practices.

For example, McDonald’s was a target due to its connection with mega-corporation Monsanto. It was obvious that the direct actions performed could only “shut down” the corporations for a brief period of time, if at all.

If the action was intended only to be educational, then it surely succeeded, since numerous news outlets had to explain to the public the main target of the actions: ALEC, a group of corporations that work together to buy off politicians so that pro-corporate laws can be passed and anti-1% laws can be defeated.

However, if the goal of the day of action was to build power towards winning concrete victories for working people, Shut Down the Corporations must be viewed with greater scrutiny.

Although education is a crucial component in any social movement, it must be incorporated into a larger strategy of building power among the 99%. This creates an easy barometer to assess Occupy or labor movement actions: does the action build power or not?

But how does one define “building power?” In this writer’s opinion, building power means engaging wider layers of working people in struggle towards common goals, either in united defense against a corporate or government attack, for example Save Social Security and Medicare, etc., or a united front struggling towards a common, unrealized demand: Jobs Now! or Health Care For All, etc.

Bringing in broader layers of working people is crucially important because, without it, the movement is not strong enough to achieve anything of substance; it’s impossible to shut down the corporations with 1,000 people.

Engaging these broader layers of people in a concrete struggle is crucially important because a real struggle creates solidarity among participants, gives strong meaning to the movement, is a beacon for those who relate to the struggle and thus pulls them into the fight, and clearly defines the goals of the movement, while also defining the movement’s enemies and allies.

Occupy is lacking many of these crucial elements, which could eventually undermine the whole movement, possibly soon.

For example, many Occupy activists see themselves — and the action Shut Down the Corporations — as part of a very meaningful struggle, but the broader 99% do not understand this struggle, or at least do not connect this struggle of Occupy to their own personal situation. Take for instance the Occupy activists who protested McDonald’s relationship with Monsanto: this was excellent educational, or propagandistic, activism, but working people will not be pulled into joining the movement, via agitation, by such tactics.

Even the working people who were eating at McDonald’s during the protest are unlikely to be radicalized by learning about Monsanto. This is because Monsanto doesn’t directly relate to their lives, meaning that even though they happened to be eating at McDonald’s, the average working class person has more serious priorities than French fries: finding a job, keeping their job, finding a living wage job, paying their rent, health care, education, day care, gas and bus prices, etc.

This is where Occupy has fallen painfully short. Nearly all of the factions within Occupy — and there are factions — ignore the fundamental issues that actually have the potential to mobilize the 99% in a serious struggle. Instead, these groups substitute their more-radical goals in place of the issues that directly affect working people — the only issues that can possibly bring working people into the Occupy movement and radicalize them into action.

This dynamic directly affects every aspect of Occupy. For example, most Occupiers are in favor of non-violent direct action, or civil disobedience. However, civil disobedience is only truly effective as a tactic when it is mass civil disobedience, as was practiced by Dr. Martin Luther King, Jr. and Gandhi, which emphasizes the above strategic point: Dr. King and Gandhi fought over issues that directly affected the lives of masses of people — segregation in the U.S. South and against direct foreign oppression for India.

Occupy has yet to give its focus to similar issues that can arouse the broader population.

In order to survive as a movement Occupy must move beyond symbolism and education to building power. Clear demands that reflect what most working people view as their most important issues must be put forth so that the 99% can directly relate to them and thus be drawn into struggle.

Without fresh adherents the Occupy movement will inevitably stagnate and die, since a movement incapable of actually achieving anything ceases to move. The few who do participate will begin to feel isolated and powerless.

Social movements are easily squandered if the energy is not funneled into a powerful social force. Without direction and meaning the energy of any social movement can dissipate into the air unused.

Without demands that clearly represent the majority’s most pressing issues of concern, most people will not be willing to fight, and thus no victories can be won. Occupy must put forth a strategic path to gaining power. Merely disrupting a few minutes of business of a corporation will not suffice.

In Portland, Oregon, where Shut Down the Corporations idea was born and where the most organizing took place in preparation, only 1,000 people appeared at the main march and rally. Thus, the stated goal of the protest “shut down the corporations” likely appeared to many as a media stunt.

Every major action of Occupy serves as a referendum for the movement; the number of protest participants serve as a barometer of public support; those who actively support Occupy would naturally attend protests that Occupy label as “important.”

Therefore, the action, Shut Down the Corporations, cannot be a blueprint for future organizing in the Occupy movement. A path to the wider 99% must be found fast before Occupy activists become demoralized by their dwindling relevance. Occupy has amazing potential in its ability to coordinate actions across a vast country, but the only way to draw in the broader working class is to listen to their issues and fight to achieve their goals. Any other path unnecessarily wastes precious movement fuel.

4 comments for “Occupy’s ‘Shut Down the Corporations’ Action: Success or Failure?”