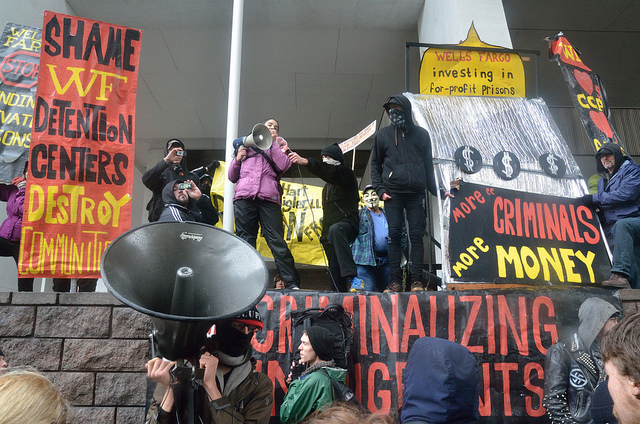 It can be said the Occupy movement’s national day of action, “Shut Down the Corporations”, was a success for many reasons. On the local Portland level a thousand people braved some of the worst weather of the year to demonstrate against a few of the corporate and legislative members of the American Legislative Exchange Council (ALEC), that insidious organization where corporations, lobbyists, and legislators conspire to write laws favorable to those corporations at the expense of individuals everywhere. While admittedly doing only token financial damage to these corporations during the brief “shutdowns”, public consciousness of the issue was and still is being raised. What was once a little known shadow agency has become exposed. Not everyone will pay attention but with each successive event more people join the movement, if not in action then in spirit. Occupy also fulfilled its stated goal of acting peacefully and without property destruction while at the same time asserting the people’s First Amendment right to assemble and exercise free speech. Even with an unpermitted march, the police in their post action press release felt compelled to give a begrudging compliment to the events of the day.

The local movement also clearly demonstrated that its tactics are becoming more sophisticated, organized and disciplined with each successive event. Proof of this was evident when the police attempted to funnel and kettle the protest onto the sidewalk very early on in the march, only to be thwarted by a Black Bloc presence that maintained formation and refused to back down. Unlike earlier marches that became all strung out and diluted as those in front surged ahead, this march maintained a tight knit formation and so was able to assert its will over the police, instead of the other way around. Another sign of occupational maturity were the hundreds of yellow umbrellas painted with eyes, a spectacle organized by the Women’s Caucus. These umbrellas imparted a subliminal psychological impact to those who saw it. They spoke of Occupy unity and organization and of a nod to the lessons of the past. Sonya Montenegro of the Women’s Caucus describes,

“One of the main goals of F29 was to expose ALEC: the corporations it is comprised of, the legislators that are involved and the process by which the corporate interests are put into law that negatively affect us all.  We had a loose theme for the day: “Ready or Not, ALEC, Here We Come!” playing with the idea of hide and seek.  ALEC has been in hiding for 40 years, but now our eyes are open to their destruction of our democracy.  We wanted to show a sea of awakened eyes, eyes that will all be watching ALEC and continuing to expose the injustices.  To create the stenciled umbrellas we used the beautiful eyes of famous activists: Martin Luther King, Burmese dissident politician Daw Aung San Suu Kyi, civil and human rights activist Ella Baker and Indian food sovereignty leader Vandana Shiva. We hope to channel their strength, vision and love.”

On the national front, unlike the spontaneous occupation of public parks and greenways in October and November of last year, This event was a coordinated action in over 90 cities in America and abroad. Taking a page from the mayors who coordinated their actions and tactics to shut down the Occupy encampments at the behest of their masters prior to the crass consumerism season last fall, Occupy organizers used teleconferencing and the tools of the internet to devise tactics and to enable the presentation of a united front.

F29 clearly demonstrated that Occupy is maturing at the local and national level. The movement is becoming a cohesive force that will most certainly grow as it demonstrates is discipline, cohesion and ability to clearly define its goals and educate the public to the assault on the 99%’s freedom and well-being by the minority who currently are attempting to assert their political and financial will on the masses. As the public becomes more aware of the class war that has been waged in this country by the 1% for more than a generation, Occupy will gain more adherents in a rising tide that will one day sweep aside the status quo.

1 comment for “Occupy’s ‘Shut Down the Corporations’ Action: Building Change One Action at a Time”