The March Forth event represented the perfect opportunity to experience a march in person. March Forth’s call to action asked for every participant to make a sign about the cause that moved them most, then all causes would march in solidarity with one another. The event was scheduled on March “Fourth”, the first Sunday and it is difficult to find anything disagreeable about a sunny Sunday afternoon in Portland, Oregon. The major benefit to this particular event was that it was permitted, and families with children were strongly encouraged to participate. With the threat of clashes between police and protesters minimized, families accepted the call to action in respectable numbers.

The scene unfolded in the South Park Blocks at Portland State University. At 2:30 pm there were approximately 100 people gathered. They were grouped in loose clusters, holding signs, soaking up a little afternoon sunshine. People were talking, talking about the issues they cared about, and talking about life in general. Friends greeted each other with hugs and smiles. Strangers introduced themselves to one another with solid eye contact, smiles, and hearty handshakes. Positive communication abounded. The mood was relaxed and mellow, in a classic Portland, Oregon sunny Sunday afternoon kind of way. Participants held their signs as they mingled with one another. 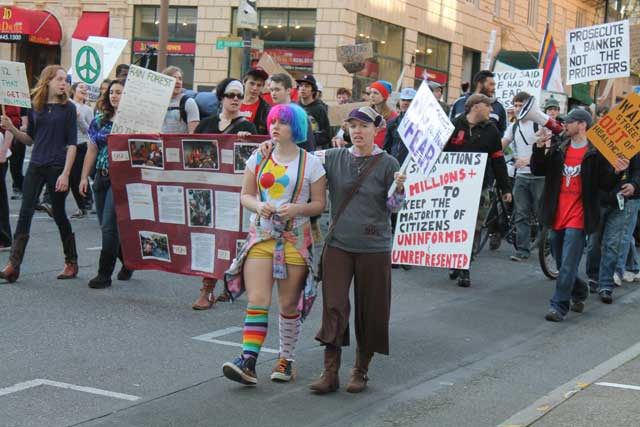 Upon stepping back and looking from a bit of a distance, it was plain to see that just about everybody participating had something to say and a sign to say it. The best thing about the signs was that without the need to speak one on one, each sign bearer’s message came across loud and clear.

In the very center of the gathering there was a group of children and parents working on designing a protest banner. It was serious business, with finger-paint designs covering a good portion of the sign. A couple of the children also had child-sized signs. One of them stated “More Lorax, Less O’Hare.” I asked the young man who made the sign to tell me about the Lorax and the O’Hare. He seemed surprised that I did not know, kind of looking at me as if I was an alien. The young man, maybe six, then eloquently explained Lorax and O’Hare. He went back to the finger-painting after telling me about the surprisingly political Dr. Suess story. 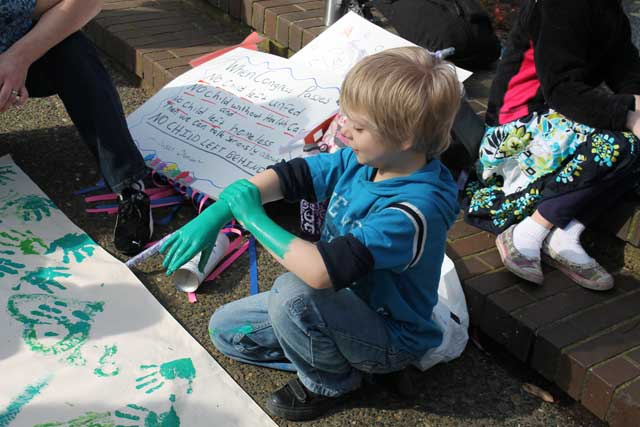 The crowd thickened to about three hundred participants by 3:00. There was a theme developing in the signs. After a rough count over twenty signs were related to healthcare, about ten were related to war and peace, about ten more were related to money in politics and the Supreme Court’s Citizens United decision, and a handful of signs specifically called out the NDAA. Various other social issues were represented: homelessness, banks, genocide, cannabis, GMO, reproductive rights, police accountability, environmental, vegan, worker’s rights, post office, and more. It was impossible to count or see them all, there were so many signs bearing messages. Small handmade cloth flags were also passed around by one of the organizers that called out the need for seed freedom. Healthcare was by far the dominant issue.

Right before the march started, a few characters showed up. There was a very animated female clown who brought smiles by the boatload. A man in a sparkling silver shirt arrived towing a child, bass, and an amplifier in a bike trailer. Music pumped from the amplifier and people started dancing. Another man arrived on the scene with another child and a guitar. It looked as though there would be live music with today’s march. March Forth was shaping up to be a great Portland-style event.

The march commenced and the participants chanted several of the usual Occupy chants.

There were more chants, the crowd also made up chants, but they tended to return to those three favorites.

As the march was permitted, there was a bicycle escort, compliments of the Portland Police Department. They stopped traffic before the march arrived at each intersection, making the march very orderly and peaceful. The band and clown held up the rear of the march and people carrying the large banners were at the front. The live music coming from the musicians helped to create a very positive feeling among the crowd and seemed to help the energy levels sustain. Activists with megaphones were scattered throughout the crowd to help keep the chanting alive and energetic.

The march traveled north on the park blocks, turned on Alder then convened in Pioneer Courthouse square for about 15 minutes, giving the participants a bit of time to mingle and show their signs off to citizens in the city. Standing at the observation deck offered a terrific view of the occupiers scattered throughout the square.

The march continued through the city back up to the PSU park blocks. All in all the mood and energy of the march was very positive, energetic, yet laid back. Although this was not a huge march, the participation level was very high, and there were many children and families participating. The finger-painted sign was warmly received by the crowd and hung proudly from the observation deck in Pioneer Courthouse Square. The message I took away from this march was that Occupy is alive and well. We will see much more participation come spring and summer.