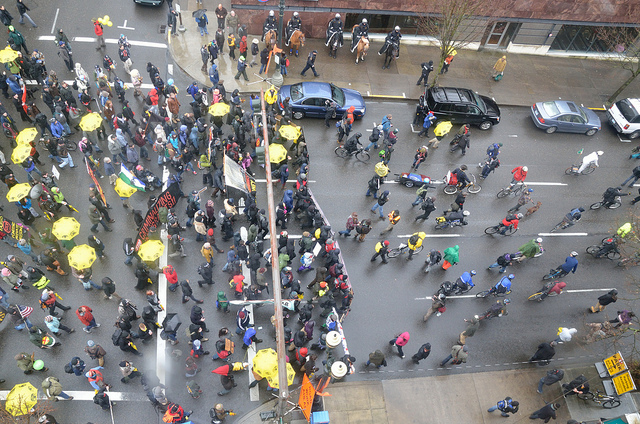 A wise man in Africa once told me that, contrary to popular opinion, everyone functions based on an ideology. He said that even the simple act of using the bathroom is a political action that requires an underlying thought process. If you don’t believe that, try finding a welcoming bathroom when you’re poor and homeless.

So we should start by acknowledging that the discussion around diversity of tactics is misguided. The real discussion is the reality that there are diverse ideologies within the Occupy movement. The very fact that it’s a movement and not a political party confirms this. Movements are about a broad spectrum of people who come together to achieve broad social justice objectives. It’s quite possible that Occupy, like many historical movements, may develop into splits and/or splinter groups as people develop ideological cohesiveness, commitment, and particular direction, but that’s a separate discussion. For now it’s important to recognize that this movement has people within it who view American society as “broken” and repairable while there are other people who view this society as an empire that never has, and never will, serve the interests of the masses of people on the planet. For the former group, the question is how to restore integrity to the system and put working people in the position to use the system to provide resources for forward progress. For the latter group it’s about winning the hearts and minds of the masses of people over to the belief that only a completely new type of system e.g. scientific socialism, or the altruism represented through anarchist beliefs, can provide working people the resources they need. Still, although these ideological tendencies–which I’ll label reformism for the former group and revolution for the latter–seem opposed to each other, the challenge for Occupy activists is to avoid falling into the “us and them” trap being constantly imposed on us from capitalist institutions such as the “mainstream” media. There are lessons in history about this issue from which we may learn. During the civil rights movement of the 1960s, the capitalist media, as well as many prominent individuals and organizations such as Jackie Robinson (the first Black baseball player), consistently played up the differences between Dr. Martin Luther King Jr. and Malcolm X. King was inaccurately portrayed as a pacifist who would let you beat him senseless before he defended himself. Malcolm was inaccurately portrayed as a violent man whose only objective was revenge against White society. These erroneous depictions were presented so consistently that many of you, whether you know it or not, still believe some of those premises about each man’s ideas today. Although Dr. King relied heavily on the capitalist media to inform him about Malcolm X and the Nation of Islam, it was ironically Malcolm himself who exposed the capitalist strategy by pointing out in 1964 that he and Dr. King were not opposed to one another. Instead, he argued that they both believed in freedom. “We just have different ways of going at achieving it!”

There lies a critical lesson for Occupy to study. When this movement first started the focus was on getting together and speaking out. This has been done through the encampments, protest marches, rallies, and other creative events that have come to define Occupy. Now we are moving into the next natural stage of development. People are starting to think beyond just expressing outrage at capitalist exploitation and oppression. Now people are wondering what the alternatives are. As a result, these ideological differences which were much less visible before are much sharper now.

There is much we can do to address this situation. For those who consider yourselves revolutionaries, this means that you are (hopefully) searching for ways to explain to people why revolution is the only solution and why the reason so many more people are being impacted by economic woes is simply because capitalism, which has always been exploitative and oppressive to most of the planet, is now in a state of decline and is therefore only able to provide sustainability to a constantly shrinking segment of the society. For revolutionaries, this is the period in which we must work to win people over to our objectives. We do this by working with people, winning their trust, and convincing them of the merits of our ideological objectives of uncompromising change. This means developing ways to communicate effectively with people because if we don’t do that, they won’t hear us and if they don’t hear us they won’t understand what it is we are fighting for. If they don’t understand what we are fighting for, they will believe the lies the capitalist media tells them about us. We have our work cut out for us, and we can’t circumvent that by thinking there are short cuts like breaking windows. Sure, we’re angry, and we have a right to be pissed, but there are much more productive methods to properly channel that anger. Revolutions can’t happen without revolutionaries and revolutionaries are only created through revolutionary political education campaigns and actions. These campaigns create the climate for revolutionary change. We use these campaigns to educate people to the benefits of revolutionary development. We show people basic things, the massive switch from banks to credit unions is a prime example of how logical socialism is, since credit unions are non-profit financial co-ops based on the socialist model. We show them that the consensus model is a socialist/anarchist model and a much more democratic model than is being offered in the capitalist system. This is the difficult day-to-day work that revolutionaries must commit to engaging in. If we do this work, we will begin to see the rising level of consciousness that will create the political milieu for revolutionary change. If we don’t do the work, we will certainly instead succumb to frustration and anger which will permit us to become willing participants in our alienation and subsequent criminalization by the power structure, so that even our own families see us as terrorists. We have to do this work and we have to reach out and embrace our non-revolutionary comrades and stop treating them like they are sell-outs. If you are a revolutionary, it’s your responsibility to convince people why they should support revolutionary change. If they don’t, you can’t be mad at them for not seeing things the way you do. That means you have a lot of work to do and you should welcome the opportunity, instead of sneering at people who are not in favor of revolution. If they think that way, don’t blame them; blame the capitalist system, or at least make sure you are looking in the mirror when you sneer.

As for those of you who are reform minded or don’t consider yourselves revolutionaries, the task for you is to avoid falling into the Malcolm versus Martin trap. Instead of viewing your revolutionary brothers and sisters through the lenses of the enemy, make the decision to truly embrace everyone in the movement. This doesn’t mean you have to compromise anything you believe it. What it does mean is you acknowledge that people have the right to be pissed and we all don’t start at the same point so no one can judge anyone and how they express their anger. Decide to be clever in analyzing these issues. When someone wants to make the issue about breaking windows, make it a point of expressing how you don’t believe in the tactic, but considering the oppression people are experiencing. Broken windows are a small price for banks to pay considering the murderous crimes they are getting away with. Then explain to them how the banks are raping society. Tell them how Wells Fargo is guilty of making billions through racist predatory lending practices that are so obvious that even the federal government is currently engaged in a class action suit against that bank. I guarantee you that will get the topic off of the $500.00 window. If you make the decision to embrace your revolutionary comrades, even if you don’t agree with them, then you reduce the marginalization and alienation they feel which contributes to their feelings of hopelessness e.g. acting out by breaking windows.

Finally, for all of us, we have to agree to begin dialogue honestly with each other at every opportunity and about every issue in this movement. We have to learn to always remember we are not each other’s enemy and there is uneven development as people understand things at different levels. If we can focus on doing these things it will certainly make our movement so much stronger while making us foolproof against police infiltration and disruption. This will make us unstoppable. What a novel concept. Anybody game?