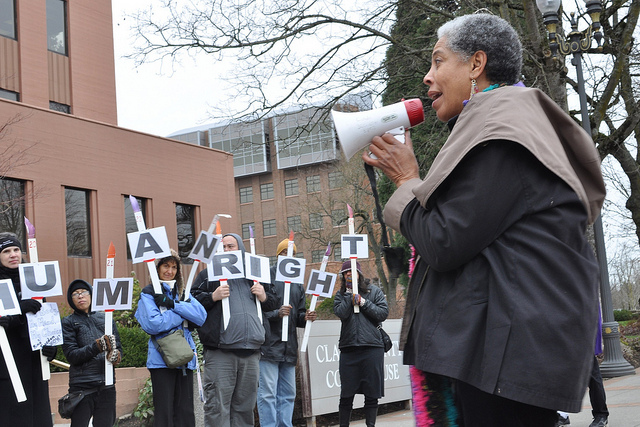 At a rally on his 34th birthday on February 28, in front of the Clark County Courthouse, Cindi Fisher announced that all criminal charges against her son Siddharta Fisher were  dropped. He had been charged with spitting on a policeman and trespassing (see the earlier Occupier story for background). “We had your support,” Cindi Fisher told a crowd of about 50 people, “and we had calls and emails and cards coming in from places as far away as the U.K., Ireland, and Brazil. You convinced the authorities that the whole world is watching, that Siddharta’s life matters, and that they cannot lock him up and throw away the key. We are so very thankful.”

Siddharta was not able to see or hear the rally from the jail cell where he is being held until he can be transported to a mental health facility, but his mother was very happy to see independent photographers and videographers present, so she can show him pictures of the event. The commercial media did not attend.

Siddharta will be held in a psychiatric facility in Washington State, but his mother hopes to raise enough money to transfer him to a program in Michigan that specializes in treating patients who have suffered trauma and have been over-medicated by so-called mental health providers. So far she has $3000 of the necessary $9000 to begin his treatment in Michigan.

For the rally, Cindi created 34 signs in the shape of candles, one for each of the years of Siddharta’s life, each sign bearing a letter of the phrase, MIND HEALTH IS A HUMAN RIGHT. She also created a large birthday card, one side of which was held by Siddharta’s sister. She performed a Tai Chi-based prayer-dance of gratitude for the support of a worldwide community in freeing Siddharta from criminal charges.