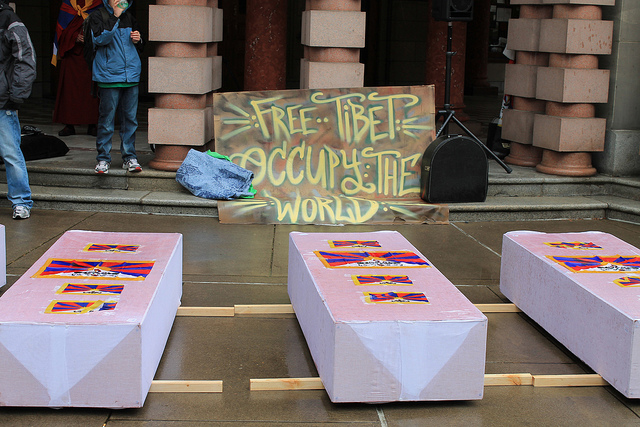 On March 10, 2012 the Portland Tibetan community, in solidarity with Occupy Wall Street which endorsed the action, marked the 53rd anniversary of Tibetan resistance to brutal Chinese occupation with a march in downtown Portland.
In the past 12 months 26 Tibetans have committed self immolation in protest to China’s unwanted rule.  Saturday’s march included mock coffins signifying these desperate acts, but the march itself was solemn, serious, well planned, and very polite, keeping to sidewalks and stopping at all street crossings. The attendees represented a cross section of Tibetans from young to old with many dressed in their native dress, and included many appropriate signs in both English and Tibetan.  A pre-march skit displayed graphically some of the horrific treatment Chinese officials inflict on Tibetan men and women on a daily basis.  The Tibetan persons speaking to the crowd during the rally thanked Occupy Portland for its solidarity and support of this action.
Opdxlive.org streamed live video of the entire event: