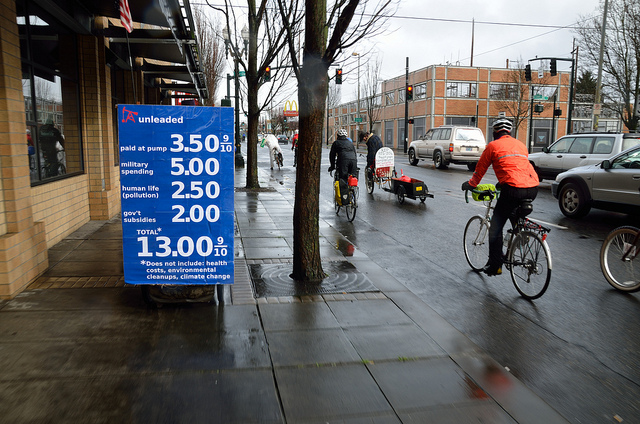 This is Part Two of an on-going series about sustainability and what it looks like to actually start living instead of consuming. illona is an immigrant from the former USSR. She dreams of a better world and a united Cascadia.

The black, glossy wet asphalt keeps my bike steady as I pedal back home after a long day of meetings. Drops of rain glimmer from the refracted illumination of porch lights, street lights, neon lights replacing the stars over my head. Foot over foot I chug my way home. The animal in me cries for shelter. Now the rain is turning to snow. It’s the beginning of March and the American Spring is just around the corner. I sniff hard. I can definitely smell it in the air. We don’t have much time. We need to recognize the war machine within all of us and evict it from our hearts. We need to be ready to discard the ways that don’t serve us anymore – and it will require sacrifice.

Living in any modern city is tough, even Portland, if you’re trying to make a minimal impact on the land. As much as I actually enjoy it, I bike because I know I have to. Everywhere we turn, we rely on the same systems that are devouring the last of mother nature, even the asphalt beneath my bicycle. We westernized humans have walled, dammed, boxed, and paved ourselves into a corner. On the whole, we have forgotten any other way of living, and demand that the solutions to our problems be solved with improving our technology. The solutions must be convenient! Build more! Build higher! The economy must grow!

The problems we share around this country and around the world stem from a rotten core set of values. We’ve built our civilization on wealth extracted from the earth and by selling land that was never really ours to begin with. It’s 2012 and we’ve reached the ends of the earth. There’s no more land to sell and the deposits of minerals and easily accessible fuel sources are almost depleted along with the fertility of our soils. We must stop and ask ourselves what will we value tomorrow?

For me that tomorrow has come and I find myself valuing skills and knowledge. What does it mean to live in harmony with nature? Living the answer to that question takes the greatest of skills and requires a certain amount of sacrifice. If you’ve never found yourself having to give up modern day conveniences, you surely will be challenged to answer that question. Our conveniences rely on the systematic rape of nature. The corporations have fooled us into thinking that there’s no cost to our convenience. But it’s a lie, and as much as we want to close our eyes and continue denying it, the costs are clear. It’s in the the diseases sweeping our populations, and it’s in the foreclosures happening left and right. It’s in the unemployment rate and it’s in the desensitized and depressed populations that walk our city streets. We keep thinking that if only we tried harder we wouldn’t be in this situation. It’s all our fault. This is the story that the corporations want you to believe in order to keep your devotion to them while lining their pockets. Well, let me tell you, it’s not your fault. You haven’t failed and this system isn’t broken. It was just built for someone else entirely. Time to wake up and smell the roasted dandelion root.

Corporations depend on wars to prosper. Governments depend on wars to prosper. As soldiers of the 1%, we, the 99% get screwed while being distracted by all the shiny medals and pomp. We’re at war now, except this time the war’s on us. Instead of us recognizing the destruction happening around us through the collusion of corporation and state or what I like to call the CorporNation, we blame ourselves for failing to provide things like healthy food, safe shelter, and medical care for ourselves. We beat ourselves up for buying a hamburger at McDonald’s when it’s all we can afford. And we get down on ourselves for being unable to make our next rent payment. All this while serving the elite with our labor and the resources that are meant to be shared by every living thing on this planet – clean water, clean air, biodiversity. 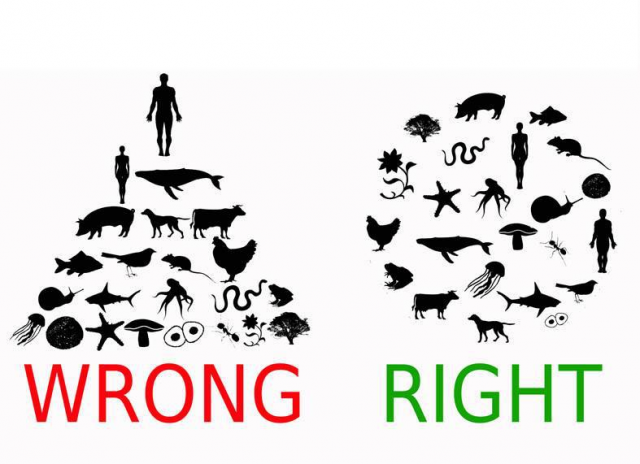 It’s different than any war we’ve knowingly fought before. Most of us didn’t even realize we were at war with the 1% until we felt the sting of economic bullets grazing their heads. And those who’ve known all along, the hippies and anarchists living on the fringes of society we long ago deemed anti-social and downright “Un-American”? Well, turns out they were right. They’ve long been figuring out how to pull away from the deadly grasp of our CorporNation.

Oh how the wool has quickly been pulled from our eyes. The 1% used to rely on us to be their dogs and it ain’t happening no more. The Occupy Movement is the deserting army and our guns have been turned on us. Now that the war is against us, the 99%, the sacrifices we must make will not be called for by our government. Our elected officials have been compromised. With each dollar we give to corporations like those that are a part of ALEC, we make our enemy stronger. The sacrifices we must now make are ones of convenience.

Unlike World War II, the sacrifices that are asked of us are not coming from our government. There are no requests to grow victory gardens or give up things like sugar and oil. We once knew what sacrifice was and were willing to go through with it because we were fighting against fascism and proud of it. Giving up conveniences? This is a concept that is extremely unpalatable for most Americans because we suffer battered persons syndrome and don’t even realize who the enemy is. We show all the classic traits of it:

The only way we are going to leave our “Dear John” letter on Bank of America’s bed is if we stop fearing them and start enabling ourselves and empowering our communities. I live in one such empowered community.

My community is one of sacrifice. Don’t get me wrong, we use computers, cell phones, and a host of other modern conveniences, however we do it sparingly and with much thought behind our actions. I live in an intentional community of twelve that values community over consumption. The thought behind our decisions looks like this:

It’s truly a sacrifice of the American way of life to have to slow down and actually ask ourselves these questions. But shifting our habits is the only way that we’re going to get out of this messy and dangerous relationship. We, the 99% are feeling the need to change our ways. This looks like investing in community and creating real value instead of buying into the old system. And it looks like learning the skills and trades needed to stop importing all of our goods and becoming producers once more. It looks like investing our savings into local businesses and housing. Can you imagine if we took our 401K’s and helped our neighbors get out of the bank’s clutches? If the interest made on them paying you back was going towards helping the next family buy a home? The new world is here and it’s waiting on a sexy motorcycle outside our window. We just need to start writing our “Dear John” letters.

I’m serious – break up with capitalism! I dare you. Write your “Dear CorporNation” letters below in the comment section.