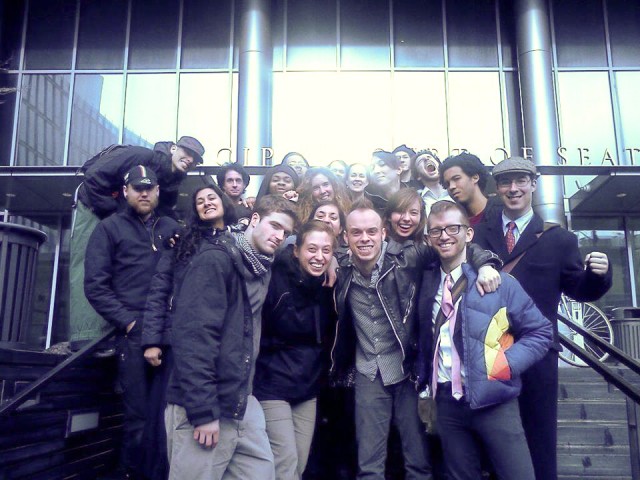 On Thursday, March 15th, five Occupiers who shut down a Chase Bank in the city of Seattle on November 2nd of 2011 heard their verdict: not guilty. When the unanimous decision by the jury of six was announced today the shock and elation, of the five occupiers and their supporters swept the room. “This sets a totally new precedent,” said one young woman.

The verdict was read at 4:15 of the third day of trial, having come after days of argument, examination of witnesses, and cross examination. The city, having brought the charges, put the manager of the Chase Bank branch on the stand as well as three members of the Seattle Police Department. One had been working as private security for Chase Bank that day while wearing a police uniform.

Danielle Simmons, one of the defendants, said after the trial, “I am in shock. The jury decided that our actions were justified and whether this is because they thought it was somehow lawful or just the right thing to do, something is changing, and I think it’s beautiful.”

On the day of November 2nd the five Occupiers chained themselves together inside of the Chase Bank using what is commonly known as a “lockbox.” When a march of about two hundred protests arrived, the branch was finally locked down and customers were informed that they should leave. The branch remained closed for the rest of the day.

“This is a huge victory for the Occupy Movement,” added Liam Wright, another defendant. “Every step of the way this bank occupation and the follow up has been more successful than we could have ever hoped for. We wanted to make clear to everyone that we don’t want a world defined by banks, we don’t want to live under them. We want to be human beings living together, free from the dead weight of financial profiteering. They act like we will live under the rule of banks and money forever. But they can’t stop us. They can’t jail us.”

Michael Stevens, another Occupier found not guilty, said, “Right now the American political and corporate establishment is headed for another election. If anything, candidates might disagree about how much they want to limit birth control or how long the military should put off bombing Iran. This is so horrifying it’s ludicrous. Meanwhile, we are determined to end the rule of banks and billionaires — over us and over this whole planet. This doesn’t even appear on the radar of ‘official politics,’ yet millions agree with us.”