by The Autonomous Workers’ Group

Within both the national and local Occupy movement there has been a great deal of rhetoric concerning the Black Bloc, calling it an act and mentality of masculine, white-privilege, typically as exercised by basement dwelling youth. Many have chosen to physically attempt to remove this element from the movement, or lash out at them by verbal means, typically reducing themselves to shouting oppressive language.

In Portland in particular, this happened at the Shutdown of the Ports on December 12th, the Solidarity March with Occupy Oakland on February 6th, and on various social media channels at different times. This article seeks to reject the idea that property destruction and Black Bloc tactics stem from just male, white-privilege or youth, but rather proposes that such tactics can be historically attributed to the 99%, whether you be of some Privilege, White, Black, Latino, Male, Female Transgender, etc. This article hopes to argue for the need of Occupy to move beyond resorting to oppressive language in situations of high-tension between protesters utilizing different tactics, as was seen during the Solidarity March on Feb. 6th. 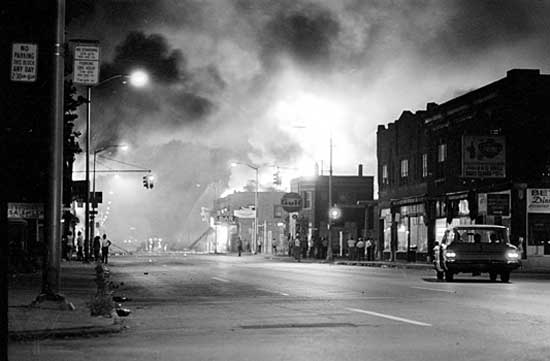 The Detroit Civil Rights Riots of ’64

In America, the Detroit Race Riot of 1863, the Civil Rights Riots of 1964, the Watts Riots, and the L.A. Riots of 92 show that violence, aggression, and property destruction are not an inherently indicative of the white middle class or of the youth, but a reality of humanity and class struggle. Most recently, we can look to the 2011 Riots in Tottenham which saw primarily people of color loot businesses and burn buildings. 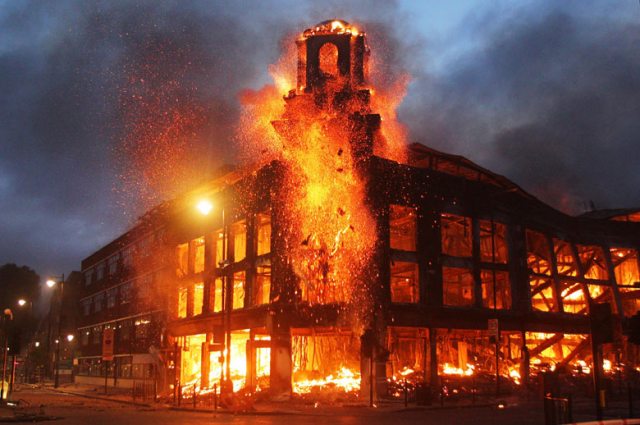 Women also have historically played a leading role in acts of property destruction or “violence”. For example, during The Women’s March on Versailles in October 1789, a police inspector, referring to the event a few years later said, ‘It is mainly the women who are stirred up, women who in turn communicate all their frenzy to the men, heating them up with their seditious propositions and stimulating the most violent effervescence.” The Suffragette Movement during World War 1 in England also saw violence, as armed groups of women committed acts of property destruction, particularly in breaking windows. Women have also lead in looting, during so-called “Food Riots” all over the world, throughout the history of capitalism.

Emma Goldman, an American Anarchist, said, “resistance against force is a natural phenomenon. Like the wild beast who is cornered by his enemy, man, being a part of nature, fights back when he is pressed. Individuals do not choose to engage in violent conduct but are forced into it by the injustice and oppression of the organized political order.”

Liberals would like to paint a dismissive picture that property damage is only the work of privileged white males; however, this viewpoint erases the agency of both women and people of color who have historically used violence and property damage as tactics within their own movements.

Throughout the Occupy movement’s campgrounds and actions, homophobic and misogynist slurs have been used against both enemies and allies, degrading our character and limiting our impact. Our words shape the way we communicate with another and denote the ideas that we hold true. Therefore, the language that each of us chooses to use both creates and reifies world views that can either be liberating or oppressing. Hurtful words carry heavy burdens for marginalized people within movements, who are often made to feel alienated and demeaned by those with privilege. Words can seem meaningless, but their impact can be dismissive and disrespectful of those with which we organize and seek solidarity. It is essential that our movement not become careless in perpetuating the oppression of those within it and those we wish to reach from the outside.

6 comments for “Is the Black Bloc Synonymous to White Privilege?”