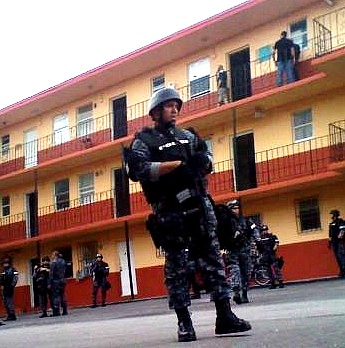 The call had been issued by Occupy Atlanta, Occupy Glen Iris and Take Back The Block to occupy Chase Bank and shut it down. Occupy Miami had been in a dormant yet turbulent state for a while. We hadn’t organized any serious actions lately, and there arose a mutual feeling among many occupiers to turn things around. So the Chase Bank occupation was intended to be one of many serious actions we’d participate in from now on, but we soon discovered there were other forces at work.

We had just gathered everybody in the building together and were about to leave for the rally, which was scheduled to take place at our old encampment spot in Government Center. We had not even passed the parking spaces in front of the building when wewere suddenly stormed by a contingent of law enforcement, which ranged from militant SWAT officers in dark camouflage and heavy body armor sporting military assault rifles and tactical shotguns, to standard City of Miami police officers with pistols, along with what looked like agents of some kind.

Vans, trucks, cars, even an armored Hummer surrounded us, and a variety of guns were aimed our way as we were ordered to get on the ground. It was a very disorienting and frightening situation, as none of us had ever had any firearm drawn on them, never mind firearms of military grade.

You could criticize us for being compliant – some have – and argue that we should have resisted and refused to get down – to literally “stand” for our rights. Comparisons were even made to those in Bahrain and Egypt and Syria, which I felt were a bit unfair. Normally I’d agree and suggest non-compliance and resistance of some kind. I feel like I am ready to face danger for my beliefs, but consider this: We were in front of a residential apartment building with children inside, and a couple of them were actually sitting in the lot watching this happen. We were all very overwhelmed and did not want to test these brutes with such big weapons at that particular moment.

Everybody in front of the building who’d been headed to the rally was lying flat on the floor with our faces to the ground, and we were being searched by members of the Miami Police Department. The agents and heavily armed officers entered the building, searched all unlocked rooms and rounded up everyone inside. I tried to grab my phone to record the raid but as I reached down I was yelled at and had guns pointed at me, so I withdrew my hands. These automatic weapons were aimed not just at the occupiers but at the building’s tenants, too, as occupiers were rounded up against the gates. The two children who’d been playing outside also had these guns pointed at them as officers commanded their mother to take them inside. 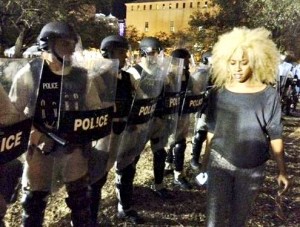 Since we were been about to mobilize, we had locked our media room. The key was requested at the end of an M16. Our guy with the key knew we had nothing to hide, so he gave them a tour of the media office.

All the occupiers lying on the ground in front, including me, were sent to sit with the others by the gates as law enforcement aggressively rounded everyone else in the building up and searched them. I managed to grab my phone and began recording under my leg to avoid any negative reactions. I took a few pictures as well. Another occupier and I were becoming increasingly vocal and less worried. We chanted and were told nothing.

After all that, I said “to hell with it” and began to record again, but this time it was done openly and I even narrated. Others started recording as well. As I filmed, three occupiers were being brought down one by one in zip-tie handcuffs. I was allowed to continue recording until I began asking why they were in cuffs, at which point the authorities approached and made me put the phone away. I did not resist, as I did not want to lose what I had.

Strangely enough, these three occupiers were soon let go without any charges. The officers finished searching everything and began to depart. The crowd erupted in applause and there were even chants of “Cops go home! Cops go home!” As we got up to go on with our day, the agent in charge came and told us not to go into our apartments, that he felt they owed us an explanation.

We agreed and gathered to hear him out. He began to explain this had nothing to do with the MPD and that they supported our protests, as it is our First Amendment right, but they had been gathering information and suspected that a small splinter group within our movement was planning to incite violence with weapons. One occupier asked him what kind of weapons they were talking about. The agent replied, “Long guns. We’re not talking sticks or rocks or anything like that.”

We were all shocked and confused and questioned this reasoning. After this, they left but mysteriously detained three other occupiers for questioning at the station, though they did not cuff them.

We all decided that this should not stop anything, so we commenced with our rally and march, heading over to Government Center and rallying right where our camp once stood. Security and county officials tried to force us off the grass, complaining that they’d spent $14,000 on it, but we did not comply, as they could make no real case against us. They even went and asked a few nearby bike-mounted police officers to help remove us. The officers did nothing.

Once we felt good and ready, we began to march to a Chase Bank in the downtown Miami area. As we arrived, we received the usual warm welcome of doors being locked. We caused a ruckus and blocked a few doorways. Police made it difficult, but we were persistent and stayed for over an hour.

While occupying, I received a phone call from one of our occupiers who had been detained: he’d been let out. He met us in front of Chase and began telling us everything; it was disturbing to say the least. The occupier who called my phone is an Egyptian. He was asked if he was Muslim, which is obviously racial profiling. They also discovered that what we thought were detectives back at our safe-house were actually FBI, and the storm-troopers with military weapons were an “intelligence and terrorism unit.” There was other information disclosed, but we cannot publicize it for safety reasons. 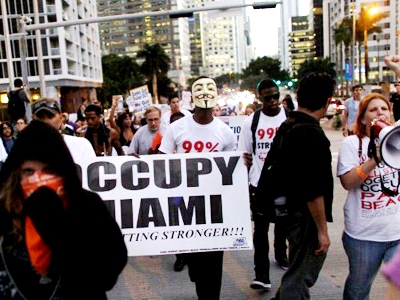 A lot has been left unclear. Who were these people really? What were their true reasons for raiding us with such force? Why did they refuse to show us a warrant? Is this the NDAA in action? I guess that remains to be seen. They warned the detained occupiers that they’d be back. So our Egyptian brother warned them that the whole world would find out about this and that this would be viral through the internet.

We feel that they wish for us to be afraid and stop. We will not comply with that. We will be celebrating the six-month anniversary of the Occupy Movement on Saturday #M17, which will begin with a rally at Lincoln Road in Miami Beach. Law enforcement knows where to find us, but we are not worried. Every time they make one of these over-the-top moves, it counts against them. They should have learned by now.

We are the 99% and we shall overcome.