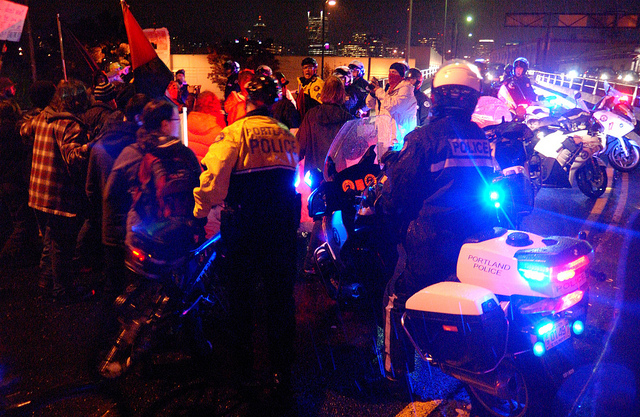 Please See Below for Update

A few weeks ago, I wrote two articles on racism within the Occupy movement. Although I, and several people who responded to my articles, supplied several examples of how racism exists within the Occupy movement (simply because racism exists in every aspect of U.S. society and Occupy is a part of this society), there were some respondents who insisted my articles had no factual basis.

Here is a case that clearly demonstrates the contradictions within Occupy as it relates people of color. Don Al-Andross is a Black man who participated in an Occupy protest on November 2nd, 2011. He was subsequently singled out, arrested, and charged with assaulting a police officer by pushing the officer in front of a bus. The truth is that brother Don was racially targeted by the Portland Police Bureau. He was assaulted by a bicycle officer who twice shoved his bike into Don’s knee and rib cage. After assaulting Don, the officer continued his aggression by continuing to attack Don with his bicycle. In an effort to protect himself, Don pushed the officer away from him. Don’s effort to defend himself against the police attack was defensive and certainly within the realm of actions that anyone in the same situation would feel justified in carrying out. Don felt that his life was in danger and so he only acted in a way to protect himself from harm or possibly death. The capitalist media, which referred to brother Don by his birth name of David Burgess, presented an open and shut case, suggesting the brother was certainly guilty beyond a shadow of a doubt. By most appearances, it seemed that Occupy Portland practically accepted the racist media’s version of events.

At the same time, another Occupy protester, a young White man named Justin James Bridges, was assaulted by Portland police at a protest and hospitalized. While Occupy Portland completely embraced the case of Mr. Bridges, making him the face of the local movement and providing him with infinite support, with minor exceptions, brother Don was basically ignored. When his case was brought up, people suggested they couldn’t take a position because they weren’t there when the incident happened and didn’t know what had taken place. Those same people didn’t seem to be concerned with the fact they also weren’t there when the incident with Mr. Bridges took place. In fact, there was even a statement released at the time from Occupy distancing the movement from brother Don, thus suggesting the charges against him were true.

There were apparently several people at the November 2nd demonstration who have stated publicly that no assault upon police officers took place. These people have evidently confirmed that they observed the entire incident with brother Don and that he never acted outside the sphere of protecting himself from unwarranted harm. Also, TriMet has confirmed there is no evidence of a report filed by any of their drivers confirming an accident that day. A phenomenal event considering a police officer was supposedly injured in this alleged incident. Still, the racist judicial system rages on, scheduling a court date for brother Don for some time in April. This confirms the age-old joke from the late Richard Pryor when he famously stated, “you go down to the courthouse looking for justice and that’s just what you’ll find – just us!”

It’s great that Occupy Portland has supported Mr. Bridges. He and everyone victimized by police terrorism deserve as much support as can be generated. It’s just time for Occupy Portland to correct its error in how it has responded and supplied support to Don Al-Andross. People can support brother Don Al-Andross by doing any of the following actions:

If you wish to express your support for Don Al-Andross, you can contact him directly by email here.

Editor’s Note and Update, 3/18/2012 11:30 PM – At the Author’s request, we are appending this statement to the original article. The Portland Occupier Editorial Group would like to make it clear that they did not request this statement, and feel that the original article has merit still, for rhetorically promoting conversation about the issue. However, we wish to acknowledge and abide by the Author’s wishes, and therefore are posting the following statement in full.

A few days ago I wrote and submitted an article entitled “Repairable Racism within Occupy.” The article was an attempt to bring justice to the case of Don Al Andross who is facing a felony charge for participating in a November Occupy protest march. In that article I included a comparison between the responses of Occupy to Don Al Andross’ case compared to that of a White person who experienced police brutality at a different Occupy march. I shouldn’t have made that comparison. I shouldn’t have made it because I didn’t take the time to check the misinformation I received about the situation before submitting that article. As a result, my words caused harm and pain to people. Although I do want to make it clear that the major intent of that article is to bring attention to some of the discrepancies in the movement that I believe are influenced by racist ideology and practices within this society, I sincerely apologize for making that comparison. I apologize to the persons I hurt and to all who read the article.

This apology is important for several reasons. First, we have to be about building a society where people come first. This means excluding all behaviors that position people as commodities to be used for convenience. Second, if we are going to build a society better than the one that currently exists, we have to make a commitment to being accountable to each other. That means admitting when we are wrong, responding with sincerity and humility, learning from our errors, and making decisions to not make the same mistakes going forward. I have a long history working in this movement. Before arriving in Portland the last year or so, the majority of that work was confined to African people and issues e.g. the inner-city, Africa, etc. As a result, I’ve experienced police brutality personally on several occasions, up to and including physical fights with police. I also have relatives and comrades who have been seriously brutalized and even killed by police. I have also been the victim of slander in the movement and in those instances that slander was never acknowledged or addressed. This is why I know I have to take responsibility for the confusion my words caused.

I promise to make sure anything else I write is strongly supported before submitting it. This is my responsibility, not the responsibility of the Occupier or even the people who gave me incorrect information. We are all volunteers so please, don’t blame the Occupier. So, again, I apologize to the people I hurt. Hopefully they can forgive this incident and understand my zealousness to submit that article was fueled by my passion for justice. The last thing I intended was to cause them or anyone harm, but clearly that’s what I did. Finally, I wish to implore everyone reading this to feel free to use me as an example of what not to do, and hopefully how to respond to errors when made. If you live long enough, you will make errors. I believe, and I hope the persons I harmed also believe, that making errors isn’t the end game. How we respond to them is. This is especially important in this day and age where we see corrupt political candidates, dishonest talk show hosts, and many other people, say any and everything to achieve their political goals, regardless of how wrong they are or who their words harm. I hope I am responding in a way that demonstrates the integrity and commitment to social justice that I have worked my entire adult life to achieve This incident has given me much to think about. I realize I have to learn to corral my extensive passion and energy to ensure I am taking appropriate actions while not stifling that passion. It’s essential that I learn to do that and if reading this helps anyone think about doing this also then that’s hopefully a good thing for all of us.

35 comments for “UPDATE: A Repairable Racism Within Occupy Portland”