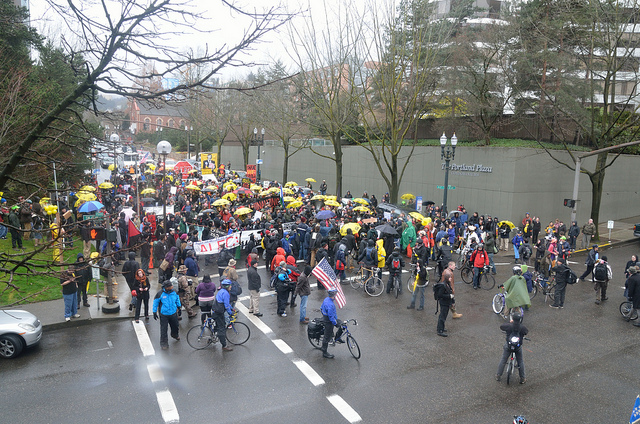 “Hope remains only in the most difficult task of all: to reconsider everything from the ground up, so as to shape a living society inside a dying society.”

It seems to me that the magic of Occupy lies in its origins. Consensus, dialogue, reclamation of space—these are the ways in which Occupy creates living alternatives of community inside of the dying world ruled by the market. This idea of living alternatives is what anarchist and social movement theorists call “prefigurative politics”, what Gandhi meant when he said, “be the change you want to see in the world”.

Marianne Maeckelbergh, an activist in the anti-globalization movement and a social theorist, describes prefigurative politics as the “conflation of movement ends and means; it is an enactment of the ultimate values of an ideal society within the very means of struggle for that society.” There are the values of neoliberalism: profit, greed, competition, efficiency, conformity to norms, the right of the market to dictate all of the terms of our lives. These values are challenged by the life-affirming values that Occupy, in its prefigurative political practices, enacts. With consensus, we put unity, dialogue, and respect over competition and efficiency. With the reclamation of space of occupation and direct action, we live the values of compassion and care for others, interpersonal connections, freedom of expression, creativity, community-building, in direct challenge to the values of profit, greed, conformity.

With prefigurative action, we embrace the idea that we can build the future in the present. Occupy is attempting to put this into practice on a scale never before attempted, but the idea has resonated throughout the history of radical social change. It can be found in, for example, the alternate city managed by laborers during the 1919 Seattle general strike and second wave feminist models of horizontal leadership. In these examples and others, an emphasis was placed on the transformative possibilities in the ways we construct our daily lives and interactions. Raoul Vaneigem, a member of the revolutionary Situationalist International movement in the 1960s, wrote: “People who talk about revolution and class struggle without referring explicitly to everyday life, without understanding what is subversive about love and what is positive in the refusal of constraints, such people have corpses in their mouths.”

By enacting the values of an ideal society now, we refuse the constraints imposed on us by neoliberalism and remake the world in spite of them. If there is death in our mouths, it is there when we lose sight of those values—when we get bogged down in the language and the disputes and the behaviors of the dominant paradigm—misdirected violence, unwillingness to listen to one another and open ourselves to the perspectives of others, failure to respect the experiences that each person brings to the movement. These things serve to estrange us from one another and alienate those who may be inclined to join the movement, which will only put us one step further away from making the future we envision.

Please understand that I am not arguing against Black Bloc actions or a diversity of tactics. Defensive Black Bloc tactics are frequently a part of the same magic of prefigurative politics as other actions—when we stand up against oppression in the communion of solidarity, when we work to protect one another from harm and arrest, when we build power from mutual support, we are actively creating a different world. I do, however, believe that actual violence, acts that are purely destructive instead of generative, trap us within the world we wish to leave behind.

The trap of the old world is hard to wriggle out of, however, and the escape is a learning process. Humans learn by doing. When we were little children, we emulated the adult world in our pretend play, joyfully doing the serious work of creativity and cognitive development. Let’s reverse that process. Let’s “play real”, emulating the world we want, until it grows and grows and becomes more real than the dead old world. This kind of ‘play’, as those who are already so deeply committed to Occupy and social change and activism already know, is damned hard work. We have to resist, first, the cultural values so ingrained on our psyches—things like competition, and distrust of strangers. We have to confront our own privilege, and the ways in which we are oppressed, so that we can be ready to be open to the ways that those privileges and oppressions intersect with the people we will be working with. We have to really listen to one another, be ready for the long hard work of real dialogue, ready to value disagreements as opportunities for new solutions. We must be ready to accept that some of us are angry, or sad, or tired; and are going to be that way for a long time. We must be there to listen, to offer care and to offer alternatives for support outside the dominant system. We have to fight the anger and sadness and weariness by making joy, with play; with art; with creativity; with action. With values that have nothing to do with buying and selling and labor-for- pay.

Social movements of the past have left us with a vast legacy of prefigurative action from which to draw inspiration—the Black Panthers had a mind-blowingly beautiful and comprehensive system of community support organizations, punk and riot grrrl created communities of art and creativity that eschewed the financial aspect of the art-making process entirely. In the 1970s the anti-nuclear organization the Clamshell Alliance did all of their decision-making via a consensus process strikingly similar to the one used by Occupy. And that’s just a minute fraction of the incredibly hard work that has been done to provide a historical foundation for the Occupy movement. Let us honor those who fought before us by learning from their experiences, grabbing hold of their models for possibility and pushing at the boundaries of those models in order to be ever more inclusive, compassionate, connected. If we are going to ask people to give up the placebos of consumption, party politics, competition, we have to offer something better, and we have to offer it now.

Vaneigem quote from his book The Revolution of Everyday Life can be retrieved from: http://library.nothingness.org/articles/SI/en/display/35