This story is from the Occupied News Wire. It was originally published in the Boston Occupier. 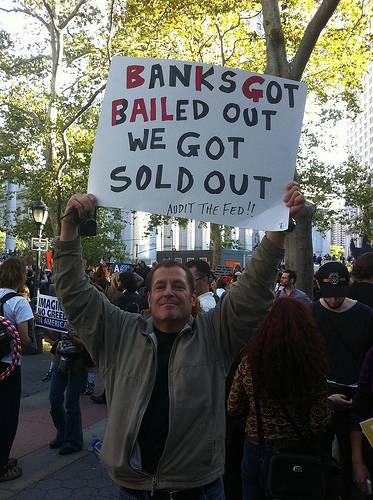 Last month, a chapter was closed in the story of bank malpractice in the US. A $26 billion settlement was agreed to by forty-nine states and five financial giants — Bank of America, Citigroup, J.P. Morgan Chase, Wells Fargo, and Ally Financial — to resolve charges that the financial firms engaged in routine and widespread mortgage foreclosure fraud. The charges concerned instances of falsified or improper documentation as well as occasions when the banks foreclosed on properties they did not even own. (The case did not address the banks’ roles in creating and reselling risky and fraudulent mortgages — key factors in the financial crash of 2008.)

Although $26 billion sounds like a lot, it really isn’t — especially when compared to these companies’ $425 billion in revenue in 2010 and $39 billion in profits. Furthermore, as reported by Adam Levitin of the blog Credit Slips, the banks will actually pay only $5 billion.

The other $21 billion comes from reducing the principal on “underwater” mortgages – the amount owed by homeowners who are in debt for more than their houses are worth. As the website Common Dreams notes, the financial burden of reducing the principal will be borne primarily by investors and by the government’s Making Home Affordable initiative. This latter fact means that we, the taxpayers, are again bailing out the banks!

Suppose you were illegally foreclosed upon by one of these five companies and that you lost your home. The recent settlement would award you between $1,500 and $2,000, calculates Yves Smith of Naked Capitalism. This is relatively small compensation for the trauma of foreclosure. Seen another way, the settlement sets the penalty for forgeries and fabricated documents at a paltry maximum of $2,000 per loan.

Foreclosures are still occurring at very high rates. Alex Veiga of the Associated Press reports that over 900,000 foreclosures occurred nationwide in 2011, representing 23% of all home sales. This is up from less than 1% in 2005. In January 2012 alone, 1,333 Massachusetts homeowners received foreclosure notices and over 10% of all mortgage loans in the state are in default, observes Jennifer McKim of the Boston Globe.

For several years, activists in the housing movement have made it their priority to take on banks’ fraudulent and predatory foreclosure practices. City Life / Vida Urbana (CLVU), a community organization based in Jamaica Plain, has been a national leader in organizing such actions and is joined in the Boston area by the Chelsea Collaborative and numerous local bank tenant associations (BTAs).

Occupy Our Homes, an outgrowth of Occupy Wall Street, has been helping over the last few months to organize grassroots actions to prevent foreclosures in various U.S. cities. While Occupy activists have brought new energy and attention to the fight against unjust foreclosures, it is “important that Occupy Our Homes not eclipse existing organizing,” emphasizes Katie Gradowski, a Boston-based activist and participant in Occupy Boston. Housing-rights activism “precedes the Occupy movement, although it has now emerged as an important thread for many occupations,” Gradowski continues.

On January 30, CLVU, the Chelsea Collaborative, Occupy Boston, Mass Uniting, and several local BTAs worked together to stage a march on the Boston offices of Fannie Mae and Bank of America. Protesters demanded principal reductions for homeowners whose mortgages were “underwater,” or have balances that are more than the current value of the homes. The march’s high turn-out suggests the great potential for mass actions against housing injustice in the Boston area.

Homeowners nationwide are $700 billion “underwater,” as a CLVU press release states. The $17 billion set aside for principal reduction in the recent fraud settlement is a mere drop in the bucket. Becky Bond at CREDO Action notes three other important points:

– Financial institutions, including these five, received a $700 billion bailout to keep them afloat when they crashed the financial system in 2008 — not to mention $1.2 trillion in low-cost loans from the Federal Reserve.

– The federal government’s track record in enforcing “consent decrees,” like those found in this settlement, is remarkably poor. A consent decree is a company’s agreement, without admitting guilt, that it will not engage in a specific illegal behavior in the future. In the current settlement, there is essentially no penalty for Countrywide Mortgage’s failure to comply with a previous consent decree for similarly fraudulent practices. (Countrywide is now owned by Bank of America.)

– This settlement was reached without a full investigation of the fraud that occurred. In his State of the Union Address, President Obama announced a new federal task force to investigate the financial sector. It may well uncover more extensive or egregious fraud than is currently known.

This foreclosure settlement is an example of corporations getting off easily, while people continue to suffer. No bankers are going to jail, and the banks still come out ahead. From their perspective, the $5 billion financial penalty is simply a cost of doing business.

“The only big losers are the taxpayers and, of course, the homeowners,” states the Common Dreams website. Yves Smith at Naked Capitalism observes that the settlement is a “raw demonstration of who wields power in America.”

However, despite the inequalities of influence and wealth, “we the people” must continue to take action to prevent foreclosures and the eviction of homeowners. We must demand accountability from banks and financial institutions. And we must demand that our government truly become a government of, by and for the people.

1 comment for “Mortgage Fraud Settlement: A Slap on the Wrist for Banks, Continued Troubles for the 99%”