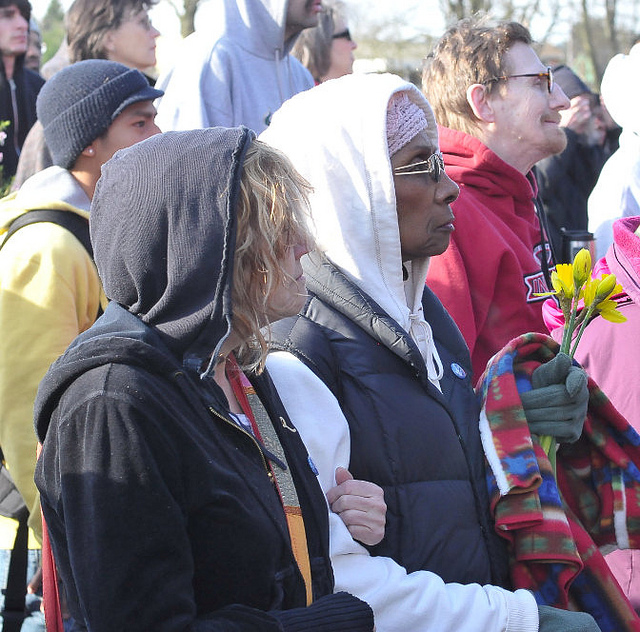 On the beautiful spring morning of Saturday, March 24th, over three hundred Portlanders gathered in Peninsula Park in North Portland to not only enjoy each others’ company, but to express their outrage and frustration for the death of Trayvon Martin. The unarmed seventeen year-old was shot by another man, who suspected him of being on drugs. However, the only thing that the young man of color was imbibing was an iced tea and candy, and his only crime was walking on the sidewalk past an armed man who viewed him with distrust because of the color of his skin.

The rally in Peninsula Park was one of many held throughout the country in recent weeks, to express dismay that not only is Trayvon Martin dead, but his killer, George Zimmerman, is still free. The local police in a suburb of Orlando, Florida, where the killing took place, did not charge the shooter with a crime, or even detain him. This tragic occurrence is one of many trailing back in American history over the years, in which young men of color who are unarmed are shot and killed by police officers and private citizens. While nothing can bring these young people back from the dead, justice for their murders is not fulfilled either, leading to an acceptance of these incidents as “normal”, and “expected”.

The citizens who gathered on Saturday wanted to make it clear that they see nothing normal or expected about such violence, and they expressed to themselves, to each other, and to anyone who would listen that they will not allow such events to be treated as “just another instance”. Many people took turns addressing the crowd, voicing their thoughts and ideas. Children carried cans of iced tea and bags of Skittles, the candy that Trayvon Martin had been carrying. In between each speaker, the crowd chanted again: “No Justice, No Peace!”

Here are some selections from the speakers. Most people did not give their names, and so these quotes are anonymous. But they are, in totality, the voice of the people, speaking for themselves, and to themselves.

“This is a cause that will unite the flame of justice not just in Florida, but across the nation.”

“We believed in the possibility of a ‘post-racial America’ after the election of a black president. But racism has come back from underneath.”

“This will happen again and again unless we stand up for justice.”

“How many of you out there remember having ‘The Talk’ with your parents? They warned me about this. And not just from the police. They told me, ‘People are going to try to do bad things.’ These self-described vigilantes.”

“There’s a disease in this country that can only be fought by the people. The justice system doesn’t work.”

“We are here together, enjoying the park. We don’t need a Trayvon Martin to come and enjoy our park. We are here in the spirit of justice, and in the name of community.”

“Are we going to wait for this to happen again?”

“We know that Portland is a black and white city. We got to bring it back.” 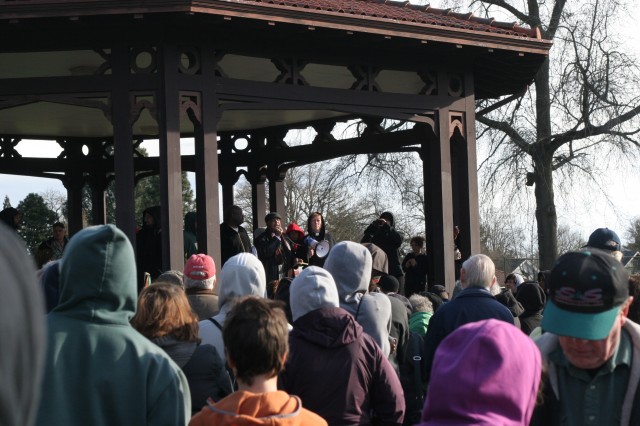 3 comments for “Portlanders Rally For Trayvon Martin, And For Themselves”