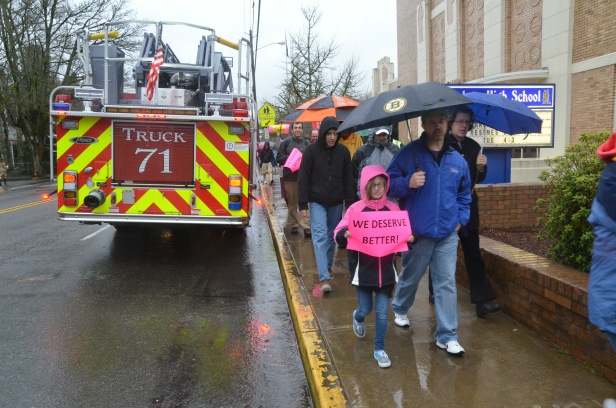 All three school boards are demanding concessions, including a freeze in teacher pay and benefits. The Parkrose school board is asking for a retroactive pay cut and for ten unpaid furlough days, while in Gresham the board is suggesting that teachers should be required to take five unpaid furlough days. Additional concessions that teachers are facing include but are not limited to reduction in preparation time and scheduled bathroom breaks for elementary school teachers.

It seems that over the last several years there has been an increasing resistance on the part of public and private unions to use the ultimate collective bargaining weapon: the strike. Like a recurring nightmare, employers are entering the bargaining process with a stern message that workers should not only forget the idea of an improved contract that would include, at minimum, cost of living increases and improved benefits. Rather, the teachers should expect to bend over and accept at best no improvements, and at worst experience take-backs such as increased employee health care costs. The bosses’ rationale is really no different than it has always been. There’s a bad economy, profits are down, and because they don’t really give a shit about the workers, they are an easy scapegoat to share the pain of low profits. In the last couple of decades union leadership has been “bending over” rather than rallying the rank and file to fight back–unlike when the labor movement was in its prime.

It is understandable that workers are scared. The corporate choreography transforming our economic culture into a materialistic “me first” paradigm has successfully segregated us from one another and convinced us that we have no real power. It is, of course, the “collective” in collective bargaining that provides that power. If we are to turn this “Titanic” away from the fatal iceberg that will sink workers’ rights, we must take over the ship and steer in unison to open sea. If the East County teachers say, “No, we will not bend over,” then the community should rally to their aid. This is the way to display our reincarnated power.

Tonight and every Thursday at 6:00 PM, teachers and community and labor supporters will be meeting at the Vecinos Unidos/Neighbors United Workers Center at 19255 E Burnside St. in Gresham. The teachers could be facing a strike vote in the near future. Please show your support so that they will know that the community has their backs, if they decide to use that ultimate weapon in their fight for a fair contract.