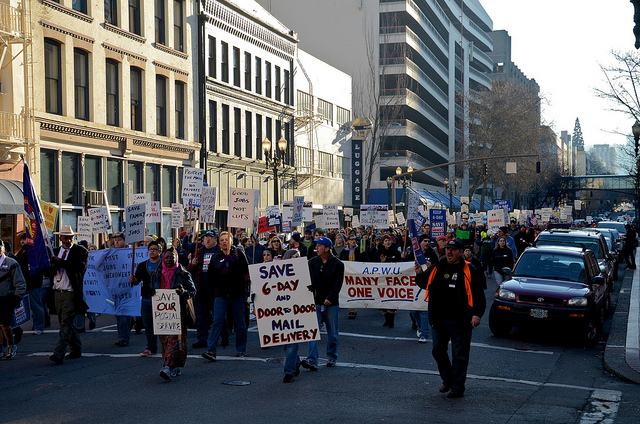 A Job-Finding Assembly for the long-term unemployed in Multnomah’s East County and Clackamas county by Occupy Portland’s Labor Solidarity Committee is scheduled for Sunday afternoon, April 15. It will be held from 2 to 5 p.m. at SEIU Local 503’s headquarters, 64th and SE Holgate Boulevard.

The purpose is to organize this sector of the unemployed into obtaining public-works jobs in the Greater Portland area and Oregon, either by lobbying city and state officials and/or by starting a Labor party advocating public-works jobs. Occupy Portland’s current focus is on East County and Clackamas County. Part of the OP Labor group’s outreach includes the most pressing problem of the 99%: unemployment.

Speakers for the Job-Finding Assembly at SEIU 503 on April 15 will be Oregon Labor Commissioner Brad Avakian as keynoter; Mary Botkin, political coordinator for Council 75 of Oregon’s AFSCME (American Federation of State, County and Municipal Employees), on lobbying; Dan Meek, co-chair of the Independent Party of Oregon, on how to start a party; and Barbara G. Ellis, journalist/historian, on the WPA (Works Progress Administration) and Minnesota’s Farmer-Labor party of the Great Depression era.

Angus Maguire, communications director of SEIU Locals 49, was recently quoted by Slate, saying he saw “parallels with the Great Depression when unemployed councils were pivotal to securing relief and jobs programs as well as eviction defense on a mind-boggling scale.” New York City councils quashed 77,000 evictions. He indicated WAO polling of those residents revealed a great “opportunity in organizing the unemployed.”

January figures released by the U.S. Bureau of Labor Statistics lists 1,100,000 people in the category of long-term unemployment (27+ months), officially called “discouraged workers.” Of that total, 638,000 are men, 421,000 are women, an overall increase of 6.6% over the previous month.

Oregon’s January statistics lists 15,900 long-term unemployed, according to the Oregon Office of Economic Analysis. It noted that Oregon’s lower unemployment rate (8.9%) wasn’t “so much due to improving labor market conditions, but rather due to people giving up looking for work who are no longer counted among the unemployed.”

Today’s political conditions mirror those of the Great Depression in which President Franklin D. Roosevelt created the Works Progress Administration in May 1935 by Executive Order. Within seven months, 3,541,000 were on the WPA payroll. Jobs ranged from infrastructure repair and construction to flood-control projects, building and staffing thousands of schools, hospitals, and park systems. Today’s additional possibility is in environmental areas.

TIME magazine noted in early February that the long-term unemployed were at least 43% of the latest statistics (12,800,000) and predicted that these “invisibles” will determine not just the economy and stock market, but the November elections for president, Congress, and state offices. Its business columnist noted: “The November elections will likely be decided by swing states that have lots of underemployed and discouraged workers” such as Pennsylvania, Ohio, Florida, Georgia, North Carolina, and Nevada.

In Oregon, if those nearly 16,000 long-term unemployeds—as well as families and friends—take political action to obtain public-works jobs prior to the November elections, they will make a significant and positive change to the state’s unemployment situation.

The Oregon Employment Department’s research division reported that the state’s overall unemployment statistics for January averaged 9.9%, but seven counties were at 12.0% to 14.6%: Crook, Douglas, Grant, Harney, Jefferson, Lake, and Malheur. Crook county had the highest number of unemployeds (14.6%), Clackamas and Multnomah counties ranged from 8.0% to 9.9%.