On Monday, April 2nd, members of Occupy Portland were once again swarming around the area of Chapman and Lownsdale Squares, bringing their grievances to the courts and City Hall. On this beautiful spring day, folks might have wished to be somewhere else enjoying themselves, but many were compelled to be there, some by the force of their own outrage, and others by the judicial system.

The day began early at 8:30 a.m., with a small rally in support of Don Al-Andross, who had a 9 a.m. appointment in Judge Nan Waller’s court at the Multnomah County Courthouse. Sixteen occupiers attended court with Al-Andross, in solidarity. Don was arrested in an anti-police brutality march on November 2nd, after allegedly pushing a police officer. Occupiers dispute these charges, saying that he was attacked by the officer. Little headway was made during his appearance before the judge, and he will be back in court on Thursday and Friday for pre-trial appearances.  His actual trial will likely be at least two more weeks out. 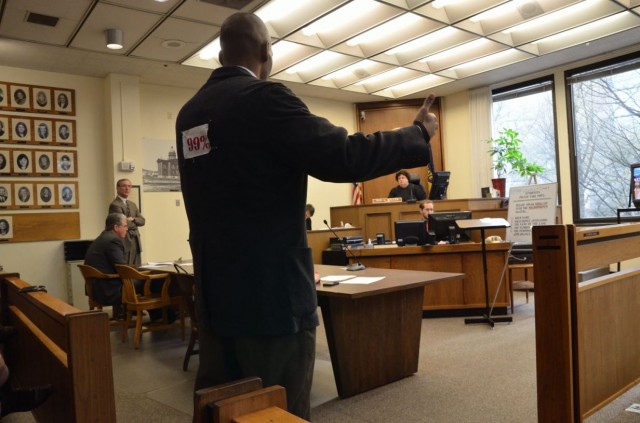 After a break for coffee, Occupiers joined a rally and march around City Hall, organized by the Albina Ministerial Alliance. The rally demanded justice for Aaron Campbell, the unarmed African-American man killed by the sniper bullet of Portland Police Officer Ronald Frashour in January 2010. Just this week, a state arbitrator ruled that Frashour is to be reinstated to his job, even after being fired by the Mayor and Chief of Police in November 2010.

JoAnn Hardesty led a march of 120 people who circled City Hall, chanting “What do we want? Justice! When do we want it? Now!” Dr. LeRoy Haynes, a leader of the Alliance, said in a speech on the steps of the Hall, “When the police are not held accountable, it says any officer can do what they want to do, to any citizen of Portland.” 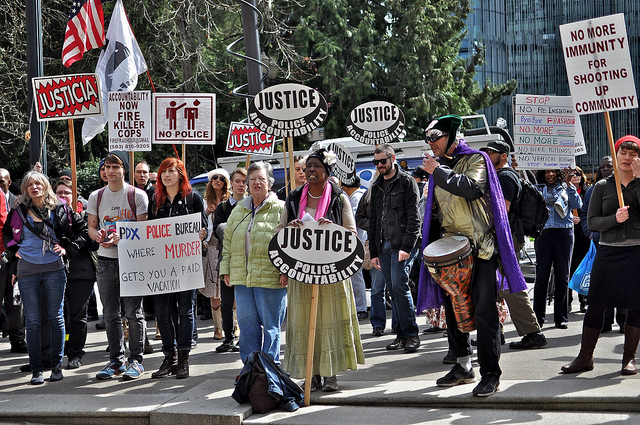 Lew Frederick, Representative for House District 43 (North and Northeast Portland), said we are a people “under siege.” He continued, “We have been under seige, and it’s time to stop that. One hundred percent of the time that there is excessive force from the police department, nothing is done. I’m tired of it, and we’re all tired of it.”

Eleyna Fugman, of the Women’s Caucus of Occupy Portland, said, “People love to ask us, Occupy, what is your issue? The killing of an unarmed African-American man in our city is an Occupy Portland issue. Racial profiling is an Occupy Portland issue. The police force not holding themselves accountable is an Occupy Portland issue. Economic injustice and racial injustice are deeply connected in this system. Occupy activists are now learning what the Black community and communities of color in Portland and across the country have known for hundreds of years: that anyone who questions or challenges the status quo is subject to unjust and deadly police force without repercussions. If police know that they can kill anyone who threatens this system and go right back to work, we are all in grave danger.” She closed by asking everyone to stand with the AMA, to occupy court houses, occupy police stations, occupy the courts, and occupy the streets until justice is achieved.

Speakers included, in addition to members of the Albina Ministerial Alliance, Martin Gonzalez, co-chair of the Board of Education of Portland Public Schools; Midge Purcell, Director of Advocacy for the Urban League; Don Handelman of Portland Copwatch; Aaron Campbell’s stepfather, John Davis; the Campbells’ family attorney, Tom Steenson; and Portland City Council candidate Teresa Raiford. All expressed outrage over the arbitrator’s ruling that Frashour should be reinstated. 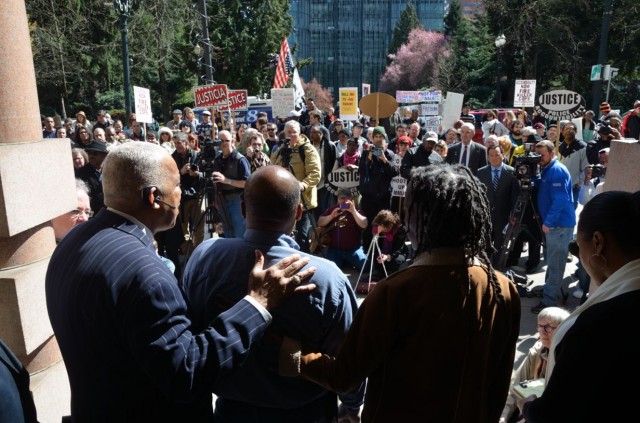 Aaron Campbell's stepfather speaks to the crowd. Photo by Paul.

After a break for lunch, Occupiers entered the Multnomah County Courthouse to go to their next court date, with motions being argued before Judge Albrecht about evidence discovery, a potential demurrer motion, and the reduction of charges on certain cases. Because of challenges to the District Attorney’s practice of lowering former misdemeanor charges to infraction level–thus depriving the defendants the opportunity for a jury trial–many Occupier cases stemming from the arrests at Main Street on October 13th, 2011 to arrests on the February 29th march against ALEC, are now rolled into one set of hearings.

Occupiers passed around a tin of mints and talked quietly, while the attorneys argued their motions. Sheriff deputies got into a brief argument with a few Occupiers over the fact that they had their cell phones out in the courtroom, but the Occupiers argued that they were using their devices as computers–and luckily, their attorneys were present in the room, to make that clear to the deputies. 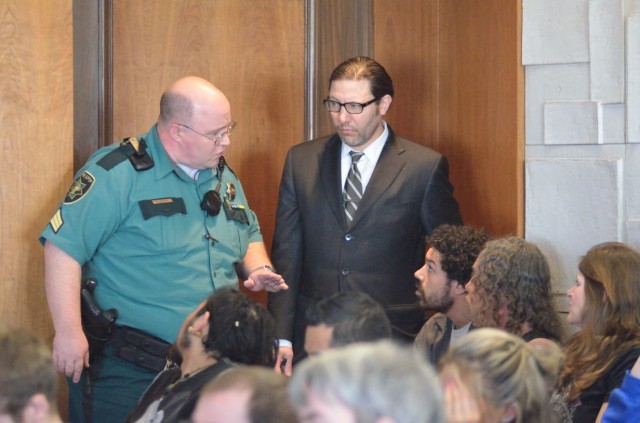 The primary argument was whether or not the defense attorneys could compel the State to release all of the Portland Police Bureau’s notes regarding Occupy Portland. At one point defense attorneys brought up the historic Squirrel v. Moose case, in which it was ruled that police can’t collect and maintain information about people who are not suspected of a crime. They argued that it was necessary to plan a defense on constitutional grounds, to see all of the context and supporting information that the police had used in planning and strategizing to evict Occupy Portland and deal with activists in crowd control situations. When the district attorney said that this was too broad of a request, the defense backed up the necessity of seeing the material, saying it was necessary to judge whether or not there had been any discriminatory application of the statutes, or intent to do so, by the Portland Police Bureau.

In the second argument regarding the demurrer, one of the defense attorneys argued that the defense needed to have a better idea of what particular aspects of the specific statutes the State would be charging the defendants with. The law was too broad to determine, just by reading it, what the State would seek to define as “unlawfully” occupying public space. In fact, said the attorney, “There seems to be a lot of confusion on the part of the higher-ups about the authority by which they did this.”

Judge Albrecht said that she would rule on both motions this week.  The next hearing for this large group of Occupiers in her court will be on Monday, April 30th at 1:30 p.m. in Room 602.

Defendants were told that if they want to view police video related to the events where they were arrested, they can go to the District Attorney’s Discovery office (6th floor of Multnomah County Courthouse) and request a viewing. To keep a copy you have to pay, but viewings for free are arranged on request. 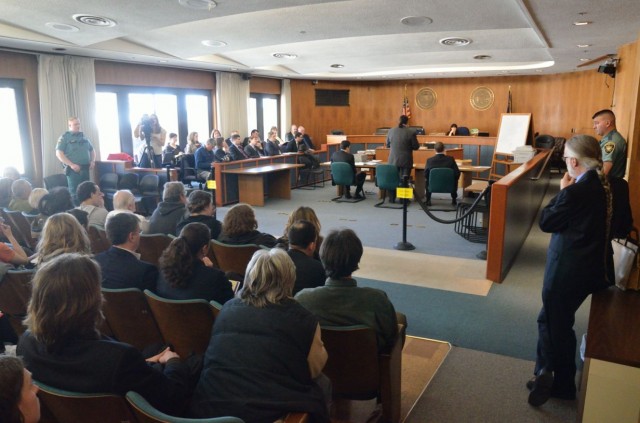 3 comments for “Demanding Justice, In The Courtrooms And In The Streets”