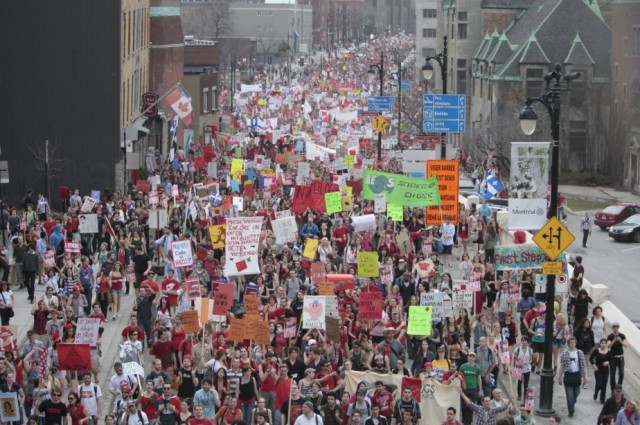 MONTREAL — There are ominous changes underway in governmental policy internationally which have resulted in tax cuts for corporations at the expense of essential public services. In Quebec, one of the focal points of the discussion surrounding the implication of austerity is the future of higher education, which has historically been protected and supported by popular movements.

There is a strong social movement in Quebec opposing the government’s 2011 university funding plan, which includes increases in tuition of 75% and intensifies the shift in funding reliance to private sources through donations. The plan also promotes further marketing of research and increased partnerships with private entities to reach the funding goals listed.

As is the case with most grassroots movements, information about this struggle does not seem to be travelling too far. This struggle has been making news for months in Quebec. In recent weeks the headlines have been multiplying as student groups have organized autonomous blockages and other economic disruptions. In the last week buildings housing the offices of Hydro-Quebec and the Liquor Board of Quebec, as well as multiple highways, the offices of the premier, and both the ministries of finance and education were all blockaded.

The escalation of economically disruptive activities on the part of the activists has been in reaction to the stubborn refusal of the government to negotiate, or even consult, with student associations on the future of our education system. On March 22nd, close to 200,000 people took to the streets of Montreal. That march was a manifestation of the support for this movement across this province and around the world.

Despite the very systematic attempts to oppress, and ignore, the social movement opposing the shift towards privatisation underway in Quebec, the movement shows no sign of dissipating. There are currently 191,000 students in colleges and universities on an unlimited strike, some of which have been on strike since mid-February. The majority of the student association who have voted to go on strike are re-grouped under the large coalition for student union solidarity (CLASSE) who would be one of the groups to enter into negotiations with the provincial government, should they respond to the demands of students.

The challenges of this movement are many, and include the explicit opposition of multiple university and college administrations to free speech and dissent on university campuses. McGill, a prestigious Anglophone university in Montreal, historically has been conspicuously absent from Quebec’s past student movements. But this year multiple McGill departments have voted to join the Quebec-wide strike. Four students were suspended without notice at McGill for picketing a class in a department which had voted to go on strike in that institution. At Concordia, another Anglophone university in Montreal with approximately 44,000 students, the presence of security has been increased in a blatant attempt to intimidate students from actively participating in the strikes occurring there.

Despite these acts to protect ‘business as usual’ on behalf of the university institutions, students, and a large number of professors, have admitted that it is well worth the inconvenience of interrupting the semester now in an effort to protect the public interests of a well-governed, well-funded and accessible post-secondary education system.

The challenges facing the movement become even more apparent off-campus, where the students are depicted as spoiled and greedy, working only to secure their self-interests. In actuality, mobilized students have been working hard to broaden the debate from just the tuition increases, to the implications of increased private funding for universities. This is expected to adversely affect teaching and research in many disciplines. It would also undeniably affect the research agenda of institutions, as well as the objectivity of research and the ability of institutions higher learning to critically analyse without restraint.

The media has also been quite a challenge for students since the media focus has remained very narrow and the actions of students are often taken out of context or misinterpreted. The massive demonstration in Montreal on March 22nd, was a case in point. At its peak, the march stretched for over 30 city blocks of downtown Montreal. It was subsequently downplayed by most media, especially Anglophone media outlets, who reduced it to a farcical caricature of itself, with helicopter shots of a sparse crowd walking down a wide boulevard. This type of coverage is fairly typical of the spring.

In a more positive light, the mobilisation of students in Quebec has been endorsed by many unions: from construction workers and public employees, to teachers and steelworkers. It is therefore, not only a student movement, but a significant part of a broader social struggle against regressive governmental policies. Although the situation is nowhere near as extreme, the movement here in Quebec cannot be seen in isolation from what is happening in Chile, and from the labour movements happening in Spain. All of these popular movements share common visions and will ultimately shape the future as we continue to actively resist policies which further entrench social disparities.

Students have vowed to keep demonstrating until such a time that the proposed tuition increases are rescinded and the government seeks alternative means of funding universities to protect them as public institutions which serve not only an essential cultural and social role.

For more information about the student movement in Quebec please go to:
www.bloquonslahausse.ca (French) or www.stopthehike.ca (English)

2 comments for “200,000 Students in Montreal Take to the Streets, Most Media Silent”