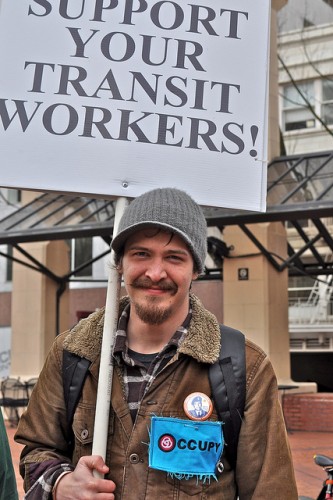 TriMet General Manager Neil McFarlane is directing TriMet as a corporation and not as a public service, according to James, an Occupier whose wife, daughter, and granddaughter have all been TriMet drivers. “He’s giving the fare inspectors quotas,” James says with outrage. “They have to give four citations an hour from now on, and every citation is going to cost some poor schmuck $175. And if that’s not enough, he’s targeting the black community for enforcement.”

These opinions from a long-time TriMet family member are supported by the open letter to TriMet passengers drafted by the TriMet Road and Rail Supervisors and read aloud at the Pioneer Square rally by Jonathan Hunt, local President of the Amalgamated Transit Union (ATU). Hunt points out that fare inspectors are no longer allowed to give warnings to passengers who may have forgotten their passes or have tickets they failed to validate.

According to Hunt, McFarlane’s policies not only include quotas for fare inspectors but also target the Yellow Line, with “an emphasis on the Albina/Mississippi and Killingsworth/Interstate stations” located in the part of Portland where there is the greatest concentration of people of color. (See ATU press release concerning the targeting of the Yellow Line here.)Hunt urges concerned citizens to sign a petition on the ATU website, here.

Currently the TriMet Board is appointed by the governor. Other options proposed by union members and Occupiers would be a publicly-elected board, or TriMet could become a people’s cooperative, and the board could be filled by rotating the positions among those most concerned: drivers, riders, and citizens whose lives are affected by public transportation.

A TriMet driver who did not want to give her name said, “The fare hike is going to hurt poor people the most. I’m ashamed to tell our riders about these changes that I don’t agree with, but it’s my job, and when I tell them how it’s going to be, I get the brunt of their anger. McFarlane sits in his office and doesn’t face the people who actually ride public transportation, and apparently he doesn’t care about the disabled, the elderly, and people of color. All he cares about his his bottom line.”

Two Rail Maintenance Technicians who attended the rally were similarly furious about the pending changes. “McFarlane blames the Union for the budget shortfall, but we don’t think there’s going to be a budget shortfall. They’ve been underestimating revenues by millions of dollars the last few years, and if they’d quit sub-contracting the lift buses, they could save $7 million, which is now going to a Scottish multi-national corporation. If McFarlane would cut back on capital projects, which is his pet project, he wouldn’t have to gouge the poor for all this money.”

Michael Pucik, Political Coordinator for the ATU, is also adamant that the Paratransit should not be contracted to a foreign corporation. “We have the equipment and the workers to run that service,” he says, “but McFarlane chooses to contract it out for $7 million.” Pucik explains that according to an independent audit, the projected shortfall that McFarlane is using to rationalize his fare hikes is just an estimate. “He’s acting like these projections are real figures, and they’re not.” 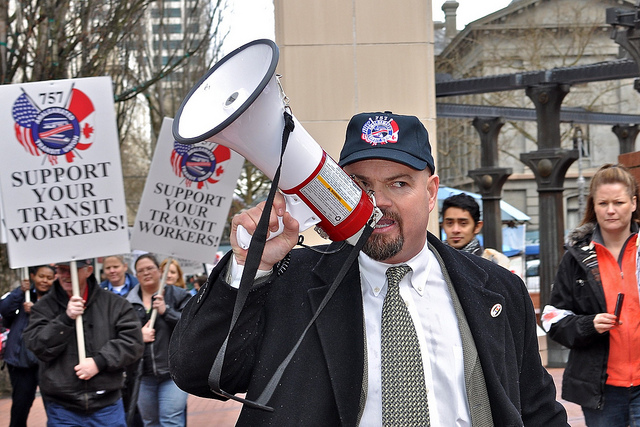 OPAL Environmental Justice Oregon believes that service cuts and fare increases will affect all of our community and is organizing a coalition of concerned community groups to protest TriMet policies. Portland has long had a reputation for being a progressive green city, but making public transportation more costly, and threatening the poor with unequal enforcement of proof of fares, is counter to everything we’ve been trying to do for the past thirty years. While trillions are being invested to keep car culture alive, those who do less damage to the environment are left fighting over budgetary scraps.

The National Day of Action supporting public transit was scheduled for April 4, 2012, because it was the anniversary of the assassination of Rev. Dr. Martin Luther King, Jr. Dan Kaufman read part of Dr. King’s last speech at the rally. In his introduction to the reading, Kaufman said, “We all have other things to do in our busy lives than to battle for the existence of useful, affordable public transit. But we must battle, for there is a war against our public institutions. There is massive theft of our resources by powerful interests that have no regard for what is best for the community.”

Kaufman gave a stirring reading of the Rev. Dr. King’s speech, including these words:
“A true revolution of values will soon look uneasily on the glaring contrast of poverty and wealth…. A true revolution of values will lay hands on the world order and say of war, ‘This way of settling differences is not just.’ This business…cannot be reconciled with wisdom, justice, and love. A nation that continues year after year to spend more money on military defense than on programs of social uplift is approaching spiritual death.”

Kaufman concluded by reading King’s last public words, spoken shortly before he was assassinated, forty-eight years ago today: “These are revolutionary times. All over the globe people are revolting against old systems of exploitation and oppression, and out of the wounds of a frail world, new systems of justice and equality are being born.”

After the rally, Hunt led the crowd of approximately 150 transit workers, occupiers, and concerned citizens in a march around Pioneer Square, carrying signs that said “Support Your Transit Workers,” “Fare Hikes Unfair!” and “PUT THE PUBLIC BACK IN TRANSPORTATION.”

To express outrage at these policies, please contact TriMet Board Members by email or phone as follows: