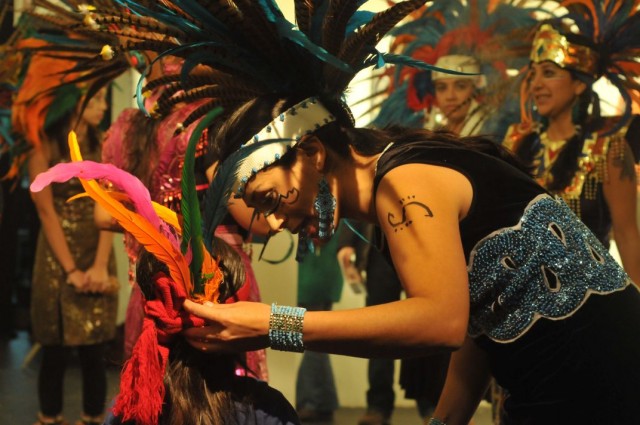 “With last year’s show we wanted to explore the increased criminalization of people of color and the emerging public xenophobia and racism throughout our public discourse, and challenge it through artistic expressions,” said Craig Hennecke, PCASC Membership and Communications Director. “Criminales Todos was an artistic response to labeling from above, from those who assume power in our society and who place that label on those not in power. Increased incarceration of people of color, the Secure Communities Program, and laws similar to Arizona’s controversial SB-1070 are all targeting people of color, aggressively and without apology. Criminales Todos was an artist response to this.”

Tomando Las Calles continues this exploration of injustice and demand for justice, exposing attendees to various community responses to targeted racism. Abigail Singer, organizer for PCASC, explained the content of the show. “From photographs documenting recent victories in the streets, to artwork reflecting the historical and international context of ‘taking the streets’–which was not something which began with the Occupy movement in the United States–to powerful performances by local activists and artists, it will be more of an experience than something to observe.”

In addition to displays by dozens of Portland artists and art collectives, such as the Occupy Portland Art Team and the B Media Collective, as well as works from Oaxaca, Mexico, Friday’s exhibition will also feature musicians Edna Vazquez and Lolo Cutumay, performance poet Walida Imarisha, and traditional dance group Lo Be. Allen Hines, a PCASC volunteer and poet, sees art as both a springboard and an opening to thought that catalyzes change. “’There is still so much more work to do battling oppression and racism in every aspect of our work but things are changing, and they’re changing from the ground, through the people’s movements.”

PCASC is a 32 year-old solidarity organization engaged in educating and mobilizing community members, workers, and students around struggles for human rights and social justice throughout the Americas. Singer noted that PCASC has spent much of its time on the streets speaking truth to power. “Tomando Las Calles will highlight this tactic, it will encourage new and creative ways to dismantle oppression, and will serve as a place to expand your consciousness about art, social justice, and the power of the movement.”

Tomando Las Calles will be presented on Friday April 6th from 7 PM to midnight at Project Grow, located at 2156 N Williams. The show is bilingual.