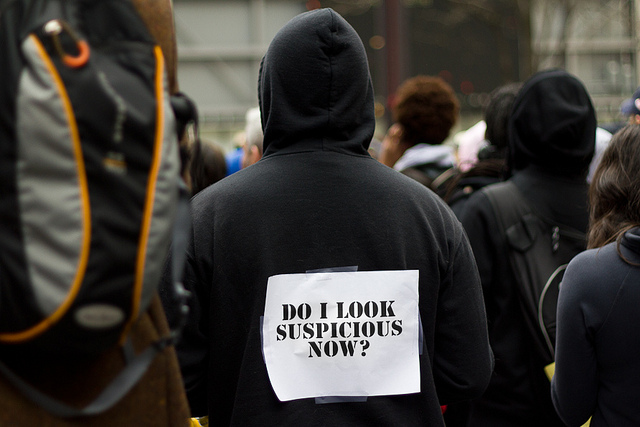 The week that Trayvon Martin’s killing blew up as a national story, another Black person died of her skin color on the west side of Chicago.

22-year-old Rekia Boyd was shot in the head Wednesday, March 21, and died a day later in what was originally described as the shooting of a couple in which the male partner was ‘armed.’ The ‘weapon,’ we now know, was a cell phone—as deadly a weapon as the bag of skittles and the can of iced tea that cost Trayvon Martin his life in Florida.

What binds these stories together? In both cases, the shooters, whose identities are known to law enforcement, remain free. In both cases, the police were quick to give a pass to the shooters and demonize their victims. That kind of character assassination is in full-bore mode in Trayvon’s case, but he’s hardly alone.

The agent of the shooters’ freedom is a system that breaks along the color of authority—the pervasive, systemic attitude among law enforcement that when you gun down a person of color, that system will cut you a break. ”In Chicago, the off-duty Chicago police officer who shot Rekia lived in the largely African American neighborhood where Rekia was gunned down, and outraged neighbors picketed his house last week to demand that charges be filed against him for her murder. The Black cell-phone-wielding target of the cop, Antonio Cross, has, however, been charged — with aggravated assault, despite the fact that he was reportedly talking on his cell phone as the cop shot him and Rekia.

In Trayvon Martin’s killing, the police and the corporate press have been at pains to report that the shooter, neighborhood watch volunteer George Zimmerman, was also not white, but ‘Hispanic.’ Had the races of either of the victims—Trayvon or Rekia—been white and their killers people of color, dollars to donuts they would have been arrested immediately, unless, of course, their killers were cops of any race, in which case the color blue would likely have trumped the deal again, and the shooter would be free.

The police who gunned down Latanya Haggerty and Robert Russ in the same weekend in June 1999 in Chicago were never charged with crimes for those shootings, because both victims were Black, and the blue color line protected the cops who killed them. The ‘weapon’ Haggerty wielded was a cell phone. Russ wielded no weapon, but he, like Haggerty, was Black, and did not wield the color of authority.

When an off-duty corrections officer gunned down Kelsey Hogan in Chicago in 1999, he, too, was protected by the color of authority. When the son of Hogan’s widow Gwen, 24-year-old Larry Darnell Harper Jr., was killed in a robbery four years later, police waited a month to contact the family to follow up on the case—until the day of a public police board hearing when family members excoriated police for their utter disinterest in the murder of a Black man.

In Chicago, the cops who tortured and wrongfully convicted dozens of Black men have never been held accountable for their crimes. Why? Because that thin blue color line protects them. Only one, the henchman, Jon Burge, has been jailed—for four years for lying to a grand jury, after decades of struggle to win torture charges against him and his crime partners. Those charges have yet to be filed, while many of the victims of that police torture remain behind bars.

The States Attorney who prosecuted those torture victims, based on ‘evidence’ manufactured from confessions obtained from those tortures, recently retired after a two-decade stint as mayor of Chicago. While former Mayor Richard Daley battles ongoing efforts to depose him in these police torture cases, he’s recently been welcomed to the board of directors of Coca Cola. Last May, Daley was appointed a ‘distinguished senior fellow’ at the University of Chicago—no small irony, since this same University housed “the Chicago boys” who advocated policies in the 1970s that brought dictatorship, austerity and mass torture and murder to countries like Chile.

In U.S. cities like Chicago and New York and Los Angeles and Oakland, the color of the police uniform protects the authorities not just from direct accountability for their misdeeds, but protects any person accused of gunning down a person of color — with indifference, hostility or worse.

This May in Chicago, the color of authority will also be deployed to protect a global gang of thugs—NATO officials—from the consequences of their actions. This same outfit, NATO, has been internationally responsible for the killing of thousands people, largely civilians, who also lack the protection of the color of authority.

In Afghanistan, that uniform color line has prompted anguished queries from those who apologize for authority about the motivations of Staff Sgt. Robert Bales, accused of shooting 17 Afghani children, women and men in cold blood. We know Bales’ name and his military history, but we know nothing—at least from the corporate press—about the names, the histories, the dreams and aspirations of the brown people he is accused of killing. They lack the color of authority to prompt this kind of interest.

And we hear virtually nothing about the costs and consequences to those who lack the color of authority in most other NATO fields of action, from Libya and Afghanistan to Iraq and Yemen.

Here in Chicago, those who seek to protest NATO’s impunity live on the other side of the color of authority, as well. Mayor 1%—Chicago mayor Rahm Emanuel—and his employees have passed draconian new rules dubbed the ‘Sit Down and Shut Up’ ordinances by protesters, including mandates for million dollar insurance policies to gather at rallies and severe restrictions on the right to picket even on the sidewalk. Police have repeatedly raised the rubric of the specter of violence from NATO opponents — despite the fact that the police themselves have overwhelmingly been the instigators of violence at gatherings from the 1999 Seattle anti-WTO protests and the 2000 FTAA protests in Miami to the mass arrests and chemical assaults at Occupy protests across the nation in the last six months.

Just as the authorities have sought to tar the reputation of Trayvon Martin (and as one of Chicago’s more popular police blogs is undertaking against Rekia Boyd), the rhetoric used to tar NATO protesters has been boundlessly inflammatory. The corporate press has parroted police memes to justify, for example, hundreds of thousands of dollars in purchases of face shields for cops to “prevent dangerous fluids – such as acids, chemicals or other liquids that might be tossed by protesters – from dripping on an officer’s face” — even though the only purveyors of chemical weapons in U.S. protests have been the police.

“What emerges is a picture of a vital public-safety institution perpetually at war with its own people,” wrote Norm Stamper, Seattle’s top cop during the 1999 WTO protests, in The Nation last November.

That at-war mentality on the part of the authorities has been pervasive across the United States and the globe for generations — and those most often on the receiving line of that mentality have been people of color. Trayvon Martin and Rekia Boyd are only two amongst their most recent victims—but their murders are jumpstarting a firestorm of public opposition that has resonance not just because of the race of the victims but because of the larger system their murders indict.

At the same time, the color of authority relentlessly protects the speech and the actions of the elites they serve, with local authorities in places like Chicago eagerly supporting the supreme rights of corporate personhood and corporate speech, again at the expense of the rest of us. While protesters have been the most visible targets of this policy to suppress unwelcome speech, it bears noting that Rekia Boyd’s murder also stemmed from the suppression of speech of the disprivileged—the cop who shot her thought the people near her were making too much noise. And if you speak out on behalf of the dispriveleged, as U.S. Congressman and former Black Panther Bobby Rush did on March 28 on the floor of the U.S. House of Representatives, you, too will be silenced, regardless of your rank or office.

The system that set the stage for the killings of Trayvon Martin and Rekia Boyd bails out rich banksters and throws working-class homeowners out of their houses, bankrolls devastating wars to advance corporate profits at the expense of millions of civilian lives and livelihoods abroad, and privileges the elites it serves at the expense of the rest of us. That system promotes a policy of divide and rule—Black against brown against white, women against men, immigrants against the native-born—designed to undermine solidarity against the real enemies that stand against the vast majority of the people on this planet and the health of the planet itself.

People are beginning to connect the dots and train their eyes—and their ire—on that system and the color of authority that protects it. That enormously positive development is not worth the lives of Trayvon Martin, Rekia Boyd, and the millions of other victims of this system—but it’s the least we can do to honor their memory. Their deaths demand it.

Chris Geovanis belongs to the Chicago Indymedia collective. She can be reached at [email protected]