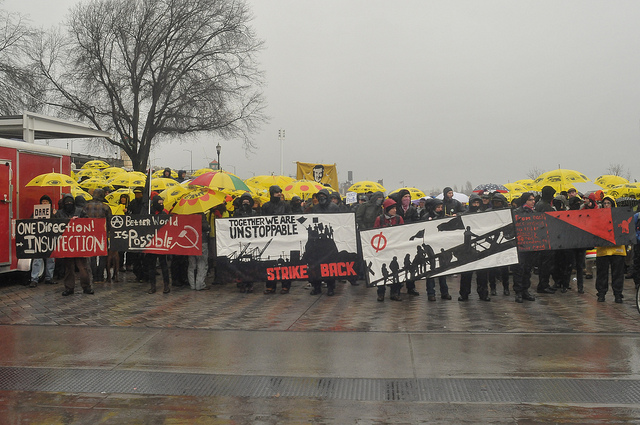 Between the election of America’s first black president and his inauguration, gun sales spiked and America suffered an ammunition shortage. Afraid that Obama would trample his Second Amendment rights, Richard Poplawski ambushed Pittsburgh police; a torrential rain of lead claimed three lives. Joe Stack piloted a Piper Dakota aircraft into an Austin IRS building, decrying the government bailout of “thugs,” “plunderers,” and “self-serving scumbags.” His suicide mission killed a government employee and injured thirteen more. Armed to the teeth and frothing from a steady diet of Glenn Beck’s rancor, Byron Williams barreled down an Oakland freeway hoping “to start a revolution.” Police stopped him for speeding, and the kevlar-vested man opened fire, injuring two before falling in a blaze of bullets, miraculously still breathing. In Tuscon, Jared Lee Loughner shot a congresswoman in the head before turning his Glock on the gathered citizens, littering the parking lot with bodies, six of them dead. Amid this carnage, Tea Party senate candidate Sharron Angle told Lars Larson, “people are really looking toward those Second Amendment remedies and saying my goodness what can we do to turn this country around?” A generation before, novelist Don DeLillo made a more subtle observation on the triumph of violence over the imagination: “it was [once] possible for a novelist to alter the inner life of the culture. Now bomb-makers and gunmen have taken that territory. They make raids on human consciousness.”

Such was the poisonous atmosphere when climate-change lone wolf James J. Lee strapped bombs to his body and proceeded into the Silver Spring, Maryland headquarters of the Discovery Channel. His manifesto demanded that the channel revamp its program lineup to discourage “the birth of any more parasitic human infants,” to cease “promoting War,” and to “disassemble civilization” while revealing it “for the filth it is.” He seized three hostages before the police gunned him down. These right-wing tactics in service of a progressive cause birthed a new crisis. No longer did the imagination deficit exist only on the right. The death logic of purifying violence had infected the entire American psyche. Few of us were immune to this hateful psychosis. Among my own darkly teeming visions, I hungered to see Lloyd Blankfein’s ample body pureed along with cilantro, mint, and lavender, to be served on ice to families left homeless by foreclosure. Some sins, I concluded, could be washed away only with blood.

In October 2011, with hatred in my heart, I stepped foot into Occupied Lownsdale Square. Around the Soldiers’ Monument wrapped a line of speakers. Their voices greeted my violent anger with peaceful defiance. I heard for the first time the human microphone, as each speaker’s words were carried by the lips into the hearts and minds of the gathered revolutionaries. After the sun fell, I sat on the damp concrete and joined my first General Assembly. I was no longer an individual but a cell in the body of an evolving organism. In one night, my cynical assumptions about the world turned to dandelion fluff. My violent urges floated away on a cleansing breeze. Occupy Wall Street had floated embers in every direction, touching off prairie fires in the imaginations of millions, clotting city streets with antibodies to the hopelessness infecting us all. My imagination, along with the world’s, was newly occupied.

But violence, hatred, and fear are not why I occupy.

3 comments for “Why I Occupy – William Haas”