by Adam Sherburne in conversation with K. Kendall 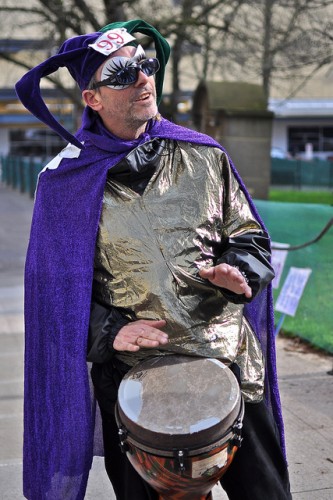 Originally from the bay area, Adam Sherburne is a musician who fought the music industry and most things American for over 20 years with his projects “Consolidated” and Free Music! Stop America!

“I call myself a trans-jester, because we’ve had countless jesters, like we’ve had countless activists, revolutionaries, labor organizers, critical journalists, and protest artists. We haven’t gotten it done, we didn’t transcend war, racism, and global environmental destruction. Getting it done requires the Occupy movement now. We and those that guard power (officials, cops, the 2-20%) must transcend our historical relations if we’re to transform our future human relations.”

“Free is a verb. To free music doesn’t mean giving away devalued music products, it means liberating music from its commodity prison. It means leaving the monologue of performance, the private property fetish of songwriting, the stockpiling of the past in recordings. It means talking/listening and teaching/learning at the same time. To free music is to occupy the music industry.”

“Music announced the inevitability of the Occupy movement fifteen years ago, but no one wanted to hear it, least of all business and musicians. File-sharing proved that the days of digital music profits were numbered, and the prevailing 100-year-old economic model of the sale of mass replicated copies (cars, televisions, bombs, computers, records, etc.) would also pass into history.”

“Stop America means stopping nation states, global capitalism, organized religion, and class society. If you stop America, you begin to create something that really scares power, the Occupy camps. You create a community that welcomes and cares for all with little need for money, administration, or permission.”

Sherburne taught music to homeless youth in Portland at the non-profit Artist Mentorship Program (AMP)for five years. When he showed up to begin dis-organizing music at Occupy Portland in early October, 2011, Sherburne found many of his homeless music colleagues ensconced in camp.

“They had already created the infrastructure for an autonomous city: peace and safety, media, medics, a mobile coffee collective, a future mayoral candidate,” he said. “People were meeting and producing a different future, so I knew it was the place for me.”

“What I call Free Music is now my on-going week-to-week involvement in Occupy. if there’s an action, free sound is there. We’re keeping the beat for marches and chants, inviting more musicians, encouraging them to see and hear how the the sound of Occupy differs from the sound of Wall Street. The Wall Street sound is bands, shows, promotion, and tickets. I walk many miles around this city playing music with folks in the streets and talking to them about all the issues, making human real-time connections.”

Sherburne is disappointed to hear people talk about music as morale building. To him, music is much more than that.

“Music is not simply entertainment. It keeps the marches going strong while telling the story of the revolution. Music literally speaks the truth of police brutality, racism, and poverty. Music–played by people on the streets to change their world, NOT the programmed ‘tracks’ used by well-intentioned media collectives to create neat little rad video collages–records how we got here, and it announces where this movement is going next.”

Sherburne has two questions for us: Are we willing to listen? And then play together?

2 comments for “A Heartbeat for the Movement”