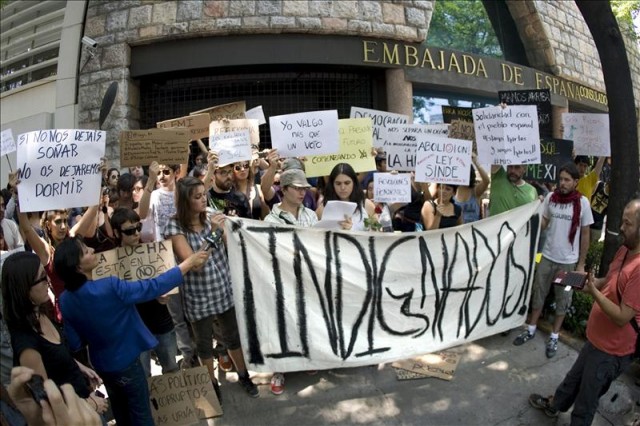 This story is from the Occupied News Wire. It was originally published on Occupied Stories.

Fifteen people decided to show support for the Occupy Oakland movement who suffered terrible police brutality and camp out in front of the municipal palace in the plaza 25 de mayo in Rosario, Argentina on 11/11/11. The group Democracia Real broke away on 1/1/2012 and on 1/7/2012 homeless families began to join the movement and struggle for dignified homes and work. The housing situation is a major cause for alarm and many people have been forced to occupy abandoned homes or lots near train tracks.

02/01/2012 The movement actively starts to form picket lines and marches with a group of 20 people, all homeless families. I am a retired military veteran of the US Army so my personal situation was different. Yet the cause is just.

2/20/2012 A Special unit called control urbana raids our camp around 1 am and takes all 7 tents and personal belongings (watch the video). Since it was a four-day weekend occupiers, including children, spent three days in the rain but the camp prevailed and never left the plaza.

On 2/13/2012 Occupy Rosario is forcefully removed from picket line and I am and one other occupier are illegally detained. The media becomes sympathizer to our cause and national TV is interrupted and Occupy Rosario is known throughout Argentina. Most occupiers leave after the detention. However, the Plaza was never abandoned and two politcal movements tried to hijack the camp but fail.

On 2/15/2012 Police forcefully tear down tents. On 3/17/2012 around 9am another attempt is made to strip the camp and people from the plaza – I suffered two broken fingers in that raid. (Watch video here and here)

After 126 days and one attempted run down by auto and 6 attempts to remove occupiers the camp decides to accept lodging for homeless families, for the sake of the children.

A lawsuit was filed on 2/18/2012 for misconduct and broken fingers and a City Council meeting is scheduled for next week. The struggle continues and paperwork is in progress at city and state levels. Main thing is the city and state are taking seriously the housing problem and we plan to lead the cause and make it national.

There is no real end to the Occupy movement currently many non political movements have asked us to speak at their GA. Unlike the U.S, Argentina has already many groups similar to occupy, we are planning marches and more activities for April and months to come.

The Mayor Monica Fein is a typical neoliberal disguised in the socialist party. Occupy Rosario has helped make an invisible problem visible to the rich and the government and I guess that is what occupy stands for, supporting those who can not stand the injustice anymore.

I know Occupy has changed me forever, after sleeping in the rain and the cold and enduring the repression, I am beginning to understand what it feels to go hungry, be cold and sleep in the streets, thank you!