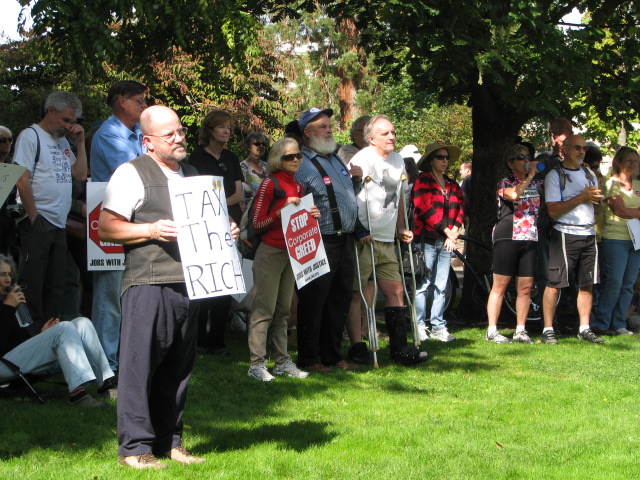 The following is an open farewell letter to my local Occupy movement.

An open letter to Occupy Medford:

Before Occupy, I spent countless hours dreaming of being involved in helping to change our country. At times I thought in extremist absolutes about how to make that happen. At other times, my trains of thought were more humble. But in the end, these revolutionary theories were just words and I was coming to realize that unless I did something, anything, that my words were worthless. So I started to look for something locally that I could volunteer for and support. And that’s when Occupy happened.

I initially saw Occupy very differently. Another protest, another cause… another group of well intended people holding cardboard signs at people on their way to work. Of course, I was wrong. Whether it was the tactical beauty of a 24/7 protest or just an energy that had been building in people over the last few years, Occupy spread like fire from New York across the country. Within two months protests and encampments could be found all around the world.

From afar I watched and read news coverage of hundreds of protests, all crying out for change. Up close I participated in local protests, marches, the port shutdown, etc., and knew these events were replaying themselves all over the country. In the wake of the Arab Spring uprisings, with thousands participating and millions sympathizing, I thought our country was in for a drastic and sudden paradigm shift.

As Occupy Medford started, either by luck or ability or both, I found myself becoming a facilitator and an organizer. Suddenly I was running meetings, planning and attending protests, writing press releases, and giving interviews. Simultaneously I had just started a new full time job and was finishing my associates degree. Needless to say, it was a hectic first few months. Of course, I didn’t do any of it by myself. But despite the time crunch and not always knowing what to do or what to say, I loved every minute of it.

But it has barely been six months and Occupy has slowed down. It’s impossible to say exactly why Occupy hasn’t been able to maintain its momentum. I think there were a few factors involved. Occupy lost almost all of its permanent encampments, decreasing visibility and synergy between protesters. Organization and rules for a direct democracy movement became a tiring process for a lot of people. After all, we aren’t used to all having a say and a voice; usually we have the “luxury” of leaving that up to someone else. And there was always the question of goals. Of course the corporate owned media was wrong on this and always detrimental as a whole to the movement. Occupy always did have clearly-stated goals. We just had a lot of them, and it was hard to narrow them down enough to bring focus. But regardless of what happened, it’s very clear that Occupy looks a lot different today than it did just a few short months ago.

As I’m getting ready to move, and having scaled back on my involvement in our local Occupy movement, I’ve spent a lot of time reflecting on Occupy. What have we accomplished and where does it go from here? And in between old feelings of overwhelming optimism and now some lingering pessimism, I’ve reached a personally satisfying answer for now: Occupy has and will continue to change the world.

To have a meaningful revolution, we need a society that is educated and self-aware and treats its citizens with respect and compassion. Without this kind of revolution, all we are doing is temporarily changing the power structure. I think that working toward fundamental change is exactly what Occupy has helped do. Thousands of older generation activists have been able to get new energy and momentum; thousands of young people have been changed in some way by this movement. By becoming more involved in both Occupy and the dozens of other work groups, campaigns, and social causes affiliated with it, Occupiers are helping to change the world. In this light, Occupy has already won.

Occupy Medford and the people in it have definitely changed me and have given me the direction and the voice I was looking for. It showed me that my generation is capable of mobilizing, of giving of ourselves and recognizing that we can change things, even if only a little bit. As a whole, and as individuals, if we can continue to do that, by occupying, by protesting, by organizing, or by volunteering: then we will change the world.