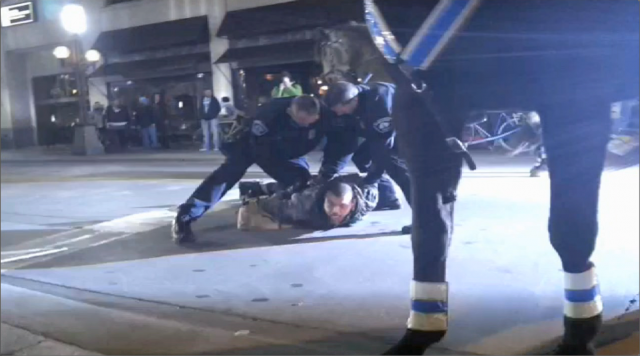 This article is from the Occupied News Wire. It was originally published on Occupied Stories.

MINNEAPOLIS, MN – As planned, groups met Saturday, April 7th in both Loring Park and Peavey Plaza at 12-noon. Around 2:00pm Minneapolis Police officers came to Peavey Plaza to state to us that we were in violation of a state law (609.74) in which our tents, banners on strings, and tarps were in violation of the law and were to be considered as a public nuisance. This was, of course, the first that we had heard about such a law in the state. When the Lieutenant and Sergent were speaking with me, they literally stated that this law had been found by the City Attorney and that the order to enforce it was sent from the Minneapolis Mayor’s Office. News reports prior to the re-occupation essentially guaranteed our right to erect tents upon Peavey Plaza and if you look back at the Minneapolis Business Journal, it quotes the Minneapolis Police Department stating that this was the case. When the officers approached us, we asked for them to return with a printed ordinance so that we could decide what we were to do with the new enforcement of this law.

Around 6:00pm, the officers returned to Peavey Plaza with copies of the ordinance to pass out. The ordinance itself applies to any type of item that is infringing upon the public’s right-of-way. It is important to note that while we had tents erected, they were not on the sidewalk, but rather they were upon the plaza itself. It is also important to note that the city of Minneapolis had just recently erected signs along the edge of Peavey Plaza advertising the planned renovation, and that those sit (unpermitted) upon the sidewalk itself along with the Minneapolis Police Department’s stationary cameras. They would not comment as to whether or not they felt that their own signs and camera were within the jurisdiction of the law itself.

After we received this notice, occupiers held a meeting to decide what it was we were to do when the officers chose to enforce the law itself. They had not given us a time-frame as to when they would be back to enforce this.

After gathering in Loring, we decided as a group that we would attempt to take back Peavey Plaza and place our structures upon the plaza itself. It is important to note that while the law has been on the books in Minnesota for a while, there was no mentioning of it prior to our reoccupation and the enforcement of the law is a clear sign that the City of Minneapolis has no respect to our First Amendment rights of both freedom of assembly and free speech. (Congress shall make no law…)

We marched from Loring Park, up Hennepin Avenue, and then back down First Avenue until we arrived at Peavey Plaza. We sat our tents and canopies back down, and began to have an open discussion as to why we all occupy. This was interrupted by the Minneapolis Police Department as they gave us a warning that the structures were in violation of the law and that we must remove them. Again, they gave no time-frame of how long it would be until they acted. After I literally forced them to give us a clear deadline (they gave us 10-minutes) we decided that we would take to the streets again. Individuals raised up our tents and canopies again and began walking up the Nicollet Mall.

While we were walking up the Nicollet Mall (in the streets) the police tried to block us from continuing our march. As they had not completed their barricade, they ordered us onto the sidewalks or risk arrest. Protesters complied with their request, and went onto the sidewalk. After passing through their failed barricade, most protesters remained on the sidewalk and continued heading North near the Target store on the Nicollet Mall. A few protesters took to the streets again but were met by mounted police (on horseback) shortly after crossing the intersection to continue North. Police then grabbed the canopy that these individuals were holding and began to bend the metal legs of it, whilst shaking the grips of protesters from it. Several protesters were knocked to the ground by the force of the police along with the fact that the mounted police were commanding their horses into the protesters. Those that remained in the streets were arrested.

While the police arrested the individuals in the streets, they also began to grab onto others that were standing upon the public sidewalk. These individuals had complied with the police, however several were still arrested without proper cause. During that time the mounted police then directed their horses onto the sidewalk itself in an attempt to intimidate and possibly injure those that were peacefully complying with their orders. I was one of those individuals. A Minneapolis Police Officer had grabbed me in what seemed to be an attempt to take me into custody, however a mounted officer began to direct his horse onto the sidewalk at that time. I was pushed into stanchions that were on the sidewalk (the stanchions were placed there to separate a restaurant’s patio from the main sidewalk itself) and as the horse pushed me, it was also kicking. If I did not have my bicycle in front of me blocking the hooves of the horse, I surely would have ended up being trampled.

During this time, across the street, Minneapolis Police Officers had grabbed onto the camera of a local reporter from KSTP. The reporter himself claims that he was assaulted. They threw his camera onto the ground and kicked it despite the fact that he had vocalized that he was with KSTP. The camera itself was ruined and his footage could not be salvaged.

According to our most recent confirmation, 9 individuals were arrested. We have been working to bail all of them out of jail tonight. After the confrontation with the police, we moved from the Nicollet Mall back to The People’s Plaza to debrief about our evening and hold a solidarity rally for those that were placed under arrest.

It concerns me that the city of Minneapolis had intentionally searched for a law to cite against us whilst claiming that they respected our First Amendment Rights. It is clear to see that the type of behavior that the Minneapolis Police Department showed to us is beyond aggression, it is clearly oppression. A reporter for a local media outlet had his camera ripped out of his hands tonight, which shows that the freedom of the press itself is not being respected. The Occupy Movement focuses upon using civil disobedience as a method of protest, and tonight’s marches were no different than those that we had last fall.