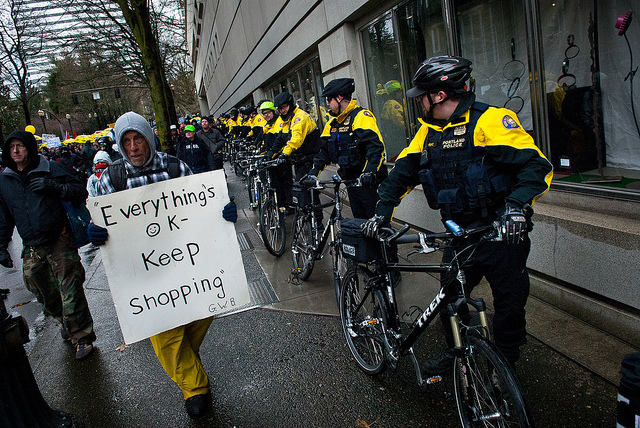 Walking on concrete-covered Earth
another emergency vehicle
suddenly blared a loud piercing siren
which made me jump,
and breathe deep on the toxic chemicals
that constantly spew from the Oregonian newspaper building.

I heard there used to be a 21 acre vegetable garden here,
now it’s a place for thousands of people to get drunk
and yell over men kicking a ball.
The team is called the Timbers, to glorify deforestation;
huge posters of people with axes and chainsaws tower at the stadium entrance.
They cut a slice of tree every time there’s a goal.

Across the street was a wonderful oak tree in Firefighter’s Park; the city cut it down recently.
While they were doing so I asked the workers why, they told me “for public safety”.
(Or is it just idle chainsaws calling to be used? like tasers given to cops, bombs to the military;
technology leading the way, pushing right past common sense and decency.)
A little while later they replaced it with a younger tree
that was apparently never cared for; looks like it’s dead.
And so now the park is mostly just a stretch of dog-shit filled grass
next to a large sitting area which is in the exact shape of a Masonic compass;
homeless people aren’t allowed to rest there, though (that might take away from the city’s image).
The compass is open toward the McDonald’s; the social architects welcoming hellish factory farms
that are the #1 source of violence and water pollution (among much other destructiveness),
but are quick to act against a healthy tree that has a small branch fall, hurting no one.
The park, which is really more of an oversized street median than a park, has a bell too
but it doesn’t ring for Liberty, or anything else;
it’s hollowed out, incapacitated, like us domesticated money-slaves.

Mass-media, mass-pollution, mass-destruction, mass-stupidity, mass-control.
Be sure to get one of those nice blue flags with the white goose on it
to show your community spirit.