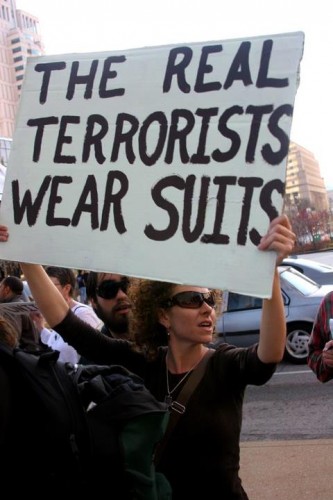 Just a few months before the NATO summit in Chicago, police clashed with protesters at the Occupy the Midwest conference held in St. Louis in mid-March. The excessive force used against Occupy demonstrators echoed the scenes of violence previously seen on the east and west coasts and a possible preview of escalated tactics coming to Chicago this May.

During the four day conference, both sides seemed to be testing new tactics and maneuvers. On the evening of March 15, approximately one hundred demonstrators set up camp at Compton Reservoir Park in St. Louis, MO, a location chosen for teach-ins, general assemblies and other planned events. Organizers managed to evade the St. Louis Police Department for the first few hours and spent the first few hours in the park without police presence. Eventually, the city caught on and police cruisers began to line the street beside the park.

The police, led by Director of Public Safety Eddie Roth, outnumbered the demonstrators as the park curfew expired and prepared to make arrests. With tents and signs in hand, the Occupy group marched out of the park and were suddenly attacked by police as they crossed into the street.

“Police gave no order to disperse from the park or the surrounding area,” Eli Silva of Occupy Tulsa said in a press release. “I was on the sidewalk, recording video footage when I saw the police hit another demonstrator, Brian Staack, in the neck with nightstick. I asked for their names and badge numbers, and was then told I was under arrest. In jail, Brian had a head injury and was obviously concussed, slurring his speech and fading in and out of consciousness.”

The police also used pepper spray and tasers during the arrest of fifteen individuals and later commented that the officers showed ‘a great deal of restraint’ during the incident. Videos of the violence circulated online confirming the use of ‘less-than-lethal’ weapons and images of protesters with blood streaming down their face announced the end of non-violent arrests in the midwest.

“I find it hard to believe the police and the city are willing to commit this kind violence over city ordinance violations,” said Zach Chasnoff of Occupy St. Louis, “to call it an overreaction would be more than an understatement.”

The following evening, a group of approximately 60 protesters took the streets in an area of West St. Louis and the police remained a full block away. The group called the action a “March Against Misery” and danced to music while stopping traffic.

After thirty minutes the police sent a fire truck through the dance party and everyone moved out of the way. It then circled around the block with the same results. Then the same maneuver was carried out with an ambulance until they both stopped—ambulance and fire truck—blocking both lanes, apparently trying to make it look like protesters stopped them.

Despite the aggressive arrests early in the conference, the assemblies and teach-ins continued through the weekend and the participants from over 20 different Occupations connected on a deeper level as a result of what they had experienced together.

“We still were able to make the networking connections necessary to organize on a regional basis,” said Chuck Witthaus, an organizer with Occupy the Midwest and Occupy St. Louis. “The conference really got people excited about the Chicago Spring and what will come next during the upcoming months.”