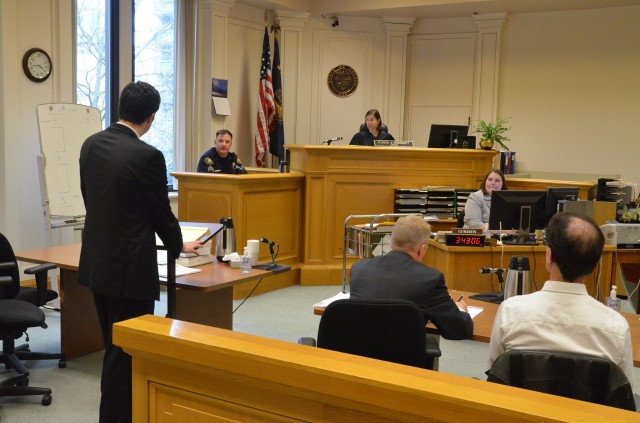 At 9 a.m. on Tuesday, April 17, Jonathan Zook sat down in the courtroom of Judge Karin Immergut, to witness the selection of a jury of his peers–the first jury for an Occupy-related court case in Portland. Zook is charged with resisting arrest, disorderly conduct in the second degree, interfering with an officer, and assault in the fourth degree, all stemming from his arrest on December 17 during an anti-NDAA march. Like many of the pre-trial motions and hearings that have been part and parcel of the Occupy Portland arrestees’ due process, jury selection was plodding, lasting most of the day. But through this process, much was revealed about the public’s impression of Occupy Portland, and what might take place when Occupiers are finally, at long last, judged by their peers.

Twenty-three prospective jurors were brought into the courtroom, to be whittled down to a final jury of six. From the very beginning it was clear how vital the process of jury selection, or voir dire, is to a trial. It is during this questioning of the potential candidates by the judge and the defense and prosecution lawyers that biases are exposed, and a fair and impartial jury is built, person by person.

The surprise was that, unlike some depictions of Occupy Portland in corporate media, the sympathies of Portland’s citizens were very much with the Occupiers. At the onset of questioning, Judge Immergut asked if anyone thought the subject matter would prevent them from making an impartial decision. Three hands immediately went up, all from candidates who admitted a heavy bias in favor of Occupy Portland. Two individuals said they knew people involved with Occupy Portland, and, regardless of police testimony, they wouldn’t be able to discount what they knew to be true from speaking to their friends and co-workers. Another person was even more vigorous in asserting this position and did not mince words. “All the witnesses for the prosecution are police officers,” she said. “ I’ve seen this too many times. I can’t trust them to be honest.” These three candidates were excused.

The more Machiavellian observer might contemplate the merits of Occupy Portland supporters keeping their partisanship under wraps, to thus sneak a favorable vote onto the jury. But if anything, Occupiers value honesty to a fault. Another candidate–when asked if he could find a defendant guilty of an infraction that he felt, ethically, should not be a crime–replied in no uncertain terms, “absolutely not”. This is, after all, why Occupiers and their supporters Occupy. They see the dark side of the “legal” establishment, the malfunctioning of the government and the economic system, and they know that despite the approval of the ruling class, the system is ethically wrong, and must be stopped. This man also was excused.

Every potential juror was aware of Occupy Portland. There were a few who acted blase, saying that they either avoided reading news about Occupy, or tried to stay away from downtown during the encampment period. None of them claimed to be Occupiers, nor had they taken part in the protests. And yet, the harshest direct criticism heard from jury candidates was that they “saw both sides of the argument equally”. If ever there was a random Portland poll geared toward judging whether Occupy had an overall positive effect in the minds of average citizens, this was it. And the result was a resounding thumbs up.

Perhaps Occupy Portland is lucky to be in Portland, with a history of civil disobedience, and a population that understands its positive effects. Certainly such supportive juror candidates can’t be had in every city. When the prosecutor asked, “Do you agree that sometimes it is okay to resist arrest?” a retired college professor asked a question in response that might have come straight from a Movement Building forum at Occupy Portland. “Well, what do you mean by ‘resisting’ arrest?” She went on to say that she thought that going limp, and passively resisting, is a valid form of civil disobedience. The prosecutor, apparently looking to find the means to excuse more sympathetic candidates, asked if anyone else concurred. Seven people unhesitatingly raised their hands. Seeing that he clearly couldn’t excuse a third of the candidates at once, he simply went on to the next question.

Finally, six people from the room were picked to judge if Jonathan is guilty beyond a reasonable doubt of what he stands accused of by the District Attorney and the Portland Police Bureau. The jurors spent the rest of the afternoon with their heads bowed, furiously taking notes on the testimony of two police officers, who, from the perspective of this journalist, clearly remembered that Jonathan Zook broke the law, but “couldn’t recall” much else. With the activists of Occupy Portland facing down the massive resources of these persecutory branches of so-called “government”, this journalist has never been sure that our legal system approximated anything close to “justice”. But at least I was reassured that the people of Portland remember what justice is, and, despite the roulette wheel of voir dire, they aren’t afraid to raise their hands and express it. 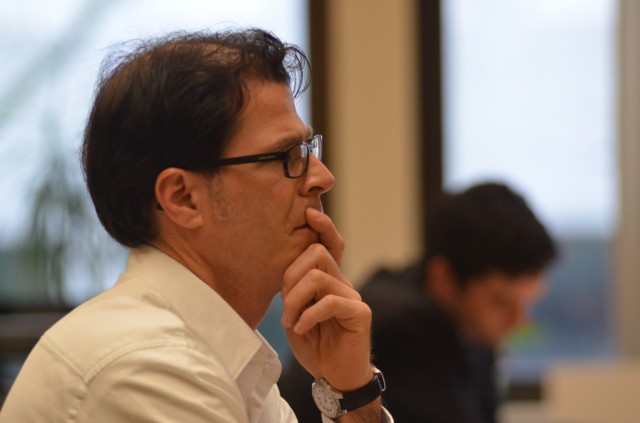