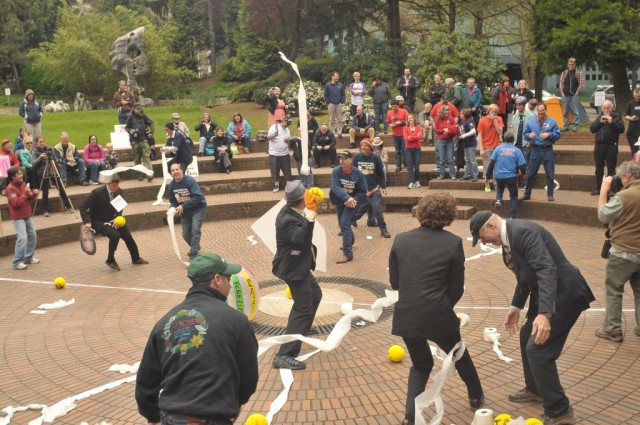 Armed solely with their cunning, chicanery, deceit, campaign donations/bribes, lobbyists, owned representatives at various levels of government, and general sociopathy, a group of corporate CEOs nearly ran the table in the Tax Day Dodgerball Competition this afternoon at Terry Schrunk Plaza. With a deft display of the peculiar brand of socialism they call free market capitalism, these representatives of the 1%–already having used their power to funnel huge amounts of public funds into their coffers in the form of government contracts–today celebrated their rigging of the tax code, with some of them, despite millions of dollars in profit, receiving a refund.

Crying that the U.S. corporate tax is the highest in the industrialized world, the 1% called for the rate to be reduced. When it was suggested that the tax rate be lowered to 25% a few CEOs cheered, but then pinned on their lapel flags as it was also suggested that all loopholes be closed. “That sounds like that crap Senator Wyden proposed a few years ago. We quickly quashed that. Thank Dollar that Wyden supports all those so-called free trade agreements that either ship jobs from the U.S., or force U.S. workers to accept pay and benefit cuts.”

Responding to a question about raising the tax on the rich a few percentage points–to where it stood under President Clinton–a one percenter noted that corporations and the rich create jobs, and higher taxes result in fewer jobs and, therefore, a weak, inefficient economy. A bystander asked, “Why then have we seen a decline in jobs as taxes have decreased? And weren’t there more jobs, albeit largely low wage service sector ones because of NAFTA and NAFTA-style legislation during Bill Clinton’s tenure as president? What about under Eisenhower when the top tax rate was about 90%? Do you mean to say during the 1950s the US economy was a basket case?” The one percenter suddenly had to leave for an appointment at the City Club. 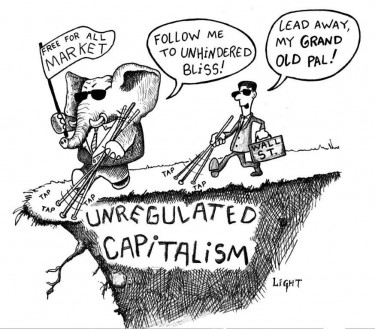 At least a few observers remarked that when a CEO was hit with a ball he was never removed from the game, yet when members from the various 99% squads were grazed, or not even touched, they were ejected. It was also noted the umpire had green paper sticking out of his abnormally inflated pockets. These “malcontents” were shooed away by 1 percenters as inciting class warfare and attempting to destroy the fabric of the country. By way of argument, a 1 percenter placed his hand over his heart and said, “God bless America,” although his arm began moving in a Strangelovian manner.

But when all seemed lost–when the 1% looked ready to walk away with all the money and power and leave joyless Mudville behind– the members of the 99% noticed that they really were part of the same team. Using the power of their numbers, they overwhelmed the 1% and wrested the trophy from their greedy hands.

“It’s truly amazing what we can do when we work together and demand justice on our terms, not theirs,” said Kari “Krusher” Koch, celebrating with her fellow 99 percenters. “We have the real power. Today we win at dodgeball. Tomorrow we create a society that reflects our values, desires, and needs, not theirs.” 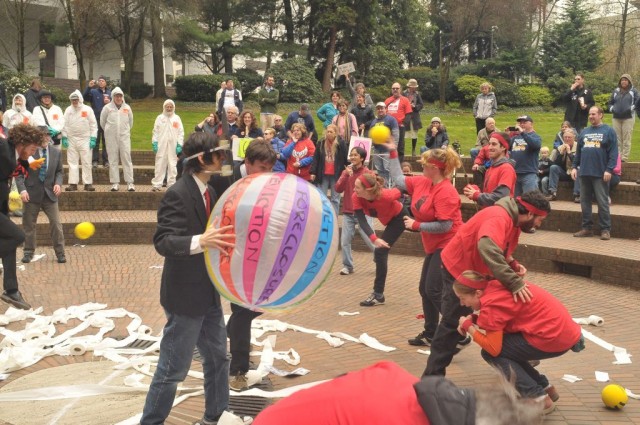