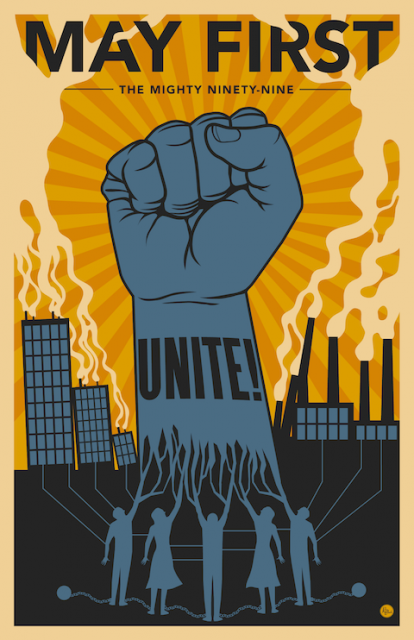 This article is from the Occupied News Wire. It was originally published on Hella Occupy Oakland.

Spring has sprung and along with the chirping of baby birds, daffodils and the air of love, this spring has the serious potential to leave last fall looking as threatening as a breast cancer march. Planned actions begin to blossom like wild flowers, leaflets hot on the press, gas mask filters replaced and corner stores make thousands on bandana sales as activists and anarchists alike refresh their wardrobes with this year’s masked fashion-forwards.

Occupy Oakland has vowed support with Golden Gate Bridge workers to close down the most famous bridge in the world. And closed it shall be! Throughout the SF Bay, marches and actions promise to bring the entire area to a screeching halt. Or at least to a very slow and undeniable crawl. No work. No school. No spending. No shit. Advice to those whose view of Occupy is less than supportive; Call in or plan on getting to work late. If your commute includes a jaunt over the bridge or on the ferry from Marin, take a pill, relax and go with it. You aren’t going anywhere, any time soon.

Personally, I’m more excited than I was at 5 years old the day before Christmas and at the same time, nervous about the turn-out. Has our hibernation over the winter lessened support and effected numbers or will this be our second breath in a continuance from last fall? Very soon time will tell.

As with everyone I’ve spoken to who was present at the first port blockade, that day will be remembered forever as one of the most beautiful happenings I’ve ever experienced. I had the honor of being front and center at the closure of Wells Fargo, Chase, and B of A, the march to The Grand Lake Theater and the most memorable march to the port that early evening. It couldn’t have been scripted better. Not seven, as “officials” reported, but TENS of thousands of people in a body of determination pouring over the overpass just as the sun set behind the port’s massive cranes. How fitting these inspired the walkers of Darth Vader’s Empire.

I saw tears in more than one person’s eyes through my own tears. People everywhere. If there was a spot to stand or a structure to climb, it was covered with like-minded and infinitely diverse citizens of the world. People who finally SAW and FELT the hope we’d been promised by posters years before but never reached. It was hope wrought by the people. Not A leader but WE leaders. Media vans in rows and choppers over head. Plain and simple; It was beautiful.

Looking back, the one thing that stands out about that day, with the exception of the actions of a very few, was the non-violence. Again, tens of thousands of people marching, rallying, canvassing, educating and acting throughout Oakland and there was an absolute minimal presence of Law Enforcement. A stark contrast to days prior. They were there, no doubt, on side streets and staging areas but as far as being met by phalanxes of armor-clad Tango teams, it didn’t happen. Not that I saw. And that day, we saw no one being battoned or gassed or flash-banged or bean bagged.

Our goals were stated in the beginning clearly and without secrecy and they were carried out clearly, without secrecy and most important absolutely. Had there been massive police presence trying to stop the actions of that day, they’.d have had little effect on the outcome of the day. The banks would have closed, the flags would have flown, The Port of Oakland would have come to a stand still and it would have been beautiful.

So we come to May 1st. Our upcoming day of action in which even greater plans have been laid with, hopefully, even greater numbers and determination. On May 1st, the Golden Gate Bridge will be shut down. That is a fact that cannot be changed.

No doubt, we will be met by a massive police presence attempting to stop the closure that is inevitable. If all goes as expected, Occupy San Francisco, Occupy Oakland and no doubt, Occupists from all over will converge at 8 am in San Francisco in view of the most beautiful bridge in the world and at the gateway to The Land of The Free and Home of The Brave. A historic day will unfold and in solidarity with striking bridge workers bargaining to keep the medical benefits they have a right to have as Americans, as workers, and as human beings, and history will be made which will be seen around the world by millions and millions of people. It will be beautiful.

Which all brings me to my final point and question; Will WE THE PEOPLE be met by a Law Enforcement prepared and intent on violent confrontation ending in either the largest kettle and arrest in history (Remember, NYPD arrested 700 people on the Brooklyn Bridge last year.) or will Law Enforcement realize that regardless of departmental policy or personal opinion, they have a DUTY to protect and serve WE THE PEOPLE and insure a safe and NON-VIOLENT action? The ball truly is in the court of The Police Departments.

WE are a peaceful movement which has been met with an often shockingly brutal and blatantly hateful militarized force for no apparent reason. I’ve experienced it first hand on many occassions, and at this point have no doubt of some deeper agenda than just upholding some penal code prohibiting unlawful assembly. No cops present and there’s no violence whatsoever. Cops show up and almost immediately, things change, lines are drawn and violence and confrontation is FORCED by those officers.

Officers, do what’s right and what will prevent injury, damage and more upcoming lawsuits of gigantic proportions. Be present but realize that this day will happen and that it is YOUR choice as armed, trained and effective forces as to whether history will see it as a giant pissing contest or as nothing less than beautiful.