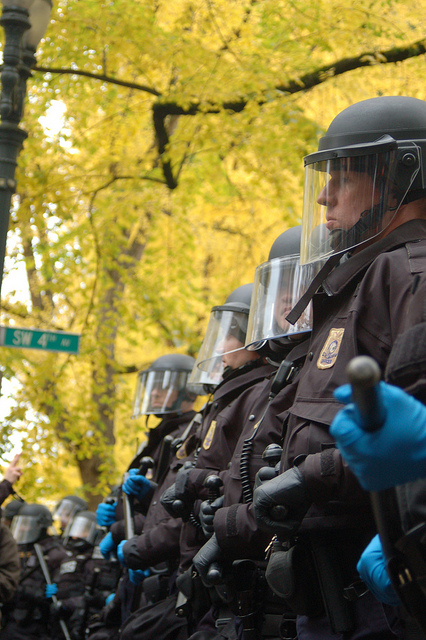 What did Chris Hedges think of mass movements before he became involved in the tactical controversies within Occupy Wall Street? Way back in 2010, Hedges’ book “Death of the Liberal Class” defined his take on the deteriorating political and economic situation of the turn of the 21st century. I picked the book up hoping to find out something about the politics behind Hedges’ anti-black bloc article “The Cancer in Occupy” and its sequel, “Occupy Draws Strength from the Powerless,” which advocates Gandhian nonviolence as a moral high ground. I’m revisiting the topic now, not to side with the black bloc against Hedges, but to draw out some reservations I have about the basis of Hedges’ opposition to “expressive” violence.

In that vein, “Death of the Liberal Class” is quite instructive. I can’t figure out why Hedges keeps referring to liberals as a class, apparently distinct from the working and middle classes, but I think he means the liberals of the ruling class. He makes the fairly obvious claim that this “class” (or section of the ruling class) has sold out the workers and the middle class, and that its institutions– from the Dems to the liberal churches–have been gutted, largely by their own leaders. The first chapter, tagged “Resistance,” begins with a lengthy interview with a disgruntled veteran who swings between right- and left-wing populism, though he has no left-wing language and must fall back on nationalist fantasies of a lost American past, worship of the Constitution, and confused Obama-2008-like jabs at “fat cats”. This, Hedges remarks chillingly, is “the new face of resistance.” The vet calls for “revolution,” but has no inkling of a revolutionary strategy. He has ideals, but no real hope. I’ll return to hope.

What is Hedges’ own relationship to liberalism, as opposed to variants of the Left tradition? Hedges calls the liberal [ruling] class “the most integral and important partner” of “the corporate state” (his updated gloss on the classic leftist category “capitalist state”). He recognizes the benefits of social democratic class compromise, but also realizes their counter-revolutionary nature. Neoliberalism and rising corporatism and authoritarianism in the Western “democracies,” especially the US, represents for Hedges an un-strategic overreach by capital. How the profit/growth imperative of capitalism may have necessitated the decimation of social democracy, as other exploitable areas ran out, does not receive much discussion. Rather, Hedges focuses on the betrayal of the liberal politicians, union tops, church leaders and the like.

Hedges sees the Red Scares of the U.S. 20th century as the death blow not only to the country’s socialist tradition, but to its liberal tradition as well. Without the leftists to speak the language of class struggle and anti-capitalism, the liberals “lost their voice.” Hedges sums up the communist analysis of capitalism thus: “For all the failings of the communists, they got it.”

Well and good. Hedges goes on to document the dismantling of the “liberal class” in anti-communist witch hunts and the conformism of the 1950s, and his own experience with liberal “intellectual” docility during the War on Terror. In the final chapter, where he returns to his theory and prescriptions for change, we see a strange, but all-too-familiar, response to the 20th century’s legacy of leftist defeat and betrayal, against the backdrop of bleakly honest predictions about climate change and the converging catastrophes now assured by the utter “liberal class” failure that was Copenhagen 2009.

Hedges stays with the Left tradition in his rejection of reform as a final strategy: The state as it now exists is democratic in name only, and is really an instrument of capital–increasingly so with the destruction of social democracy and liberalism in the late 20th century U.S. His antidote to futile reform is not revolution, he tells us, but something he calls “rebellion.” This is not insurrectionism, but something rather specific. It has a bit of an anarchist flavoring, though Hedges is no anarchist. He begins the chapter “Rebellion” with a quote from a Russian anarchist counseling against reformism: “We think we are the doctors. We are the disease.” A slow, degenerative, probably non-fatal disease, it seems, for Hedges clearly rejects the possibility of a revolutionary defeat of capitalism.

“Revolution” is the leftist category notably absent from Hedges’ otherwise dark pink index. He subscribes to the old Frankfurt School-derived pessimism, in which the masses–under the sway of the mass media–are too anesthetized to present any hope of a militant mass movement. Unlike some who share this pessimism, Hedges also categorically rejects violence, even property destruction, because of its risk to innocents and its destructive, uncontrollable psychology. This is the position of “The Cancer in Occupy:” not outright pacifism (Hedges admits that as a Palestinian in Gaza or a Jew in the Holocaust, he would take up a gun in a last-resort defense of his community), but a principled rejection of violence based on very broad claims about its inevitable nature. This goes beyond “tactical” nonviolence, to a sort of “moral” nonviolence one step closer to pacifism.

So if reform, mass-based revolution, and violent insurrection are out, where does Hedges end up? Unfortunately, on the lonely road of an existentialist play: Hopeless “revolt” for exclusively moral reasons. The chapter starts with an epigraph from Camus that’s worth reproducing:

One of the only coherent philosophical positions is revolt. It is a constant confrontation between man and his obscurity… It is not an aspiration, for it is devoid of hope. That revolt is the certainty of a crushing fate, without the resignation that ought to accompany it.

This may sound noble, but what we’re facing isn’t personal or inner “obscurity,” but the “obscurity” –the plunge into darkness–of billions of species, hundreds of millions of human beings, and civilization as we know it. It doesn’t seem to me like the time to be romanticizing absurdity. Hedges didn’t pick this quote by accident. “Acts of resistance,” he writes on page 205, “are moral acts. They take place because people of conscience understand the moral, rather than the practical, imperative of rebellion. They should be carried out not because they are effective, but because they are right”. For those familiar with “The Cancer of Occupy,” this is quite odd, because, while most leftists who condemn the black bloc do so for strategic reasons, citing the impracticality of violence/vandalism as self-expression, Hedges seems to embrace this sort of expressivism, but after earlier rejecting the “violence” of window-smashing on equally moralistic grounds. Again on page 205,  he proclaims, “Any act of resistance [sic] is its own justification. It cannot be measured by its utilitarian effect”. A moment earlier, Hedges identified resistance with “liv[ing] in the fullest sense of the word.” Fine, and civilization can die “in the fullest sense of the word,” while would-be militants are “living fully”–until they expire in neo-fascist prisons.

This sort of faux-noble nihilism is a garden path, usually leading through an organic garden somewhere along the way. As a garden educator, and someone who fully realizes the likelihood that we are entering the Dark Ages, I am all for Transition Towns and any other efforts to build up resiliency. But when these efforts are self-righteously presented as an alternative to militant politics, I get sick to my stomach. Unfortunately, Hedges also falls into this withdrawalist survivialism:  He puts his only hope in holdout communities “like medieval monasteries” (page 196), with organic gardens, of course, keeping the embers of civilization alive. Go buy land, he says, and wait for the Rapture. We’ve heard that one before.

It’s ironic that, immediately after denouncing the failure of globalization–along with all other utopian determinisms–Hedges suggests back-to-the-land survivalism as part of his own rather deterministic account. His vision is less utopian than eschatological: It posits the inevitable devolution of empire into “local fiefdoms.” This is by now a familiar dystopian future, shared with the likes of James Howard Kunstler, of The Long Emergency, as well as the leftist I see as Hedges’ doppelganger–Lierre Keith, of Deep Green Resistance. In all their accounts, some of the post-imperial localities are fascist, some green decentralist. The latter are the monasteries carrying the torch; the former are the masses, whom all three authors agree are incapable of forming an effective left-wing mass movement. But what if this collapse of empire and centralism is not inevitable? Surely there are possible near futures in which the empires live on in a more totalitarian form, or in which left-wing mass movements do in fact form. To my mind, these writers are too certain in predicting the specifics of collapse.

Of Kunstler the bourgeois eschatologist, Keith the anarcho-primitivist, and Hedges the disgruntled democratic socialist, I like Hedges’ politics best, and am struggling to find a third way between his strategy and Keith’s, both of which I see as monstrous. Keith’s primitivist politics are highly problematic, though I would gladly count her like as comrades, if they did not reject the possibility of a mass movement. Hedges, meanwhile, abdicates politics altogether, in favor of existentialist, moralistic nihilism–the poetic abandonment of hope. No. Both options are betrayal. It is either ecosocialism (whether decentralist libertarian, or using some form of a democratized central state) or barbarism. To get there, a mass movement (coupled with radical reform, prefigurative or rather preparatory practice, and possibly even guerrilla activity) is our only hope, and the only way of preventing the ascendancy of an overtly fascist Right.

Keith herself admits that Deep Green action will strengthen right-wing demagogy. This will happen anyway, but the Deep Greens’ proposed defense of small pockets of “resistance (perma)culture” seems to me like an awfully thin shield. So let Kunstler seek salvation in his elite New England enclave; let Deep Green Resisters either stand with the mass movement now struggling to be born, or else descend into armed cultism; let Hedges write eloquent letters on the moral poetry of hopeless “rebellion” from a fascist prison cell. I, for one, intend to march with as many as can be mustered, under the rigorous discipline of strategic hope. I, for one, intend to fight.

8 comments for “The Existentialist Politics Behind “The Cancer in Occupy””