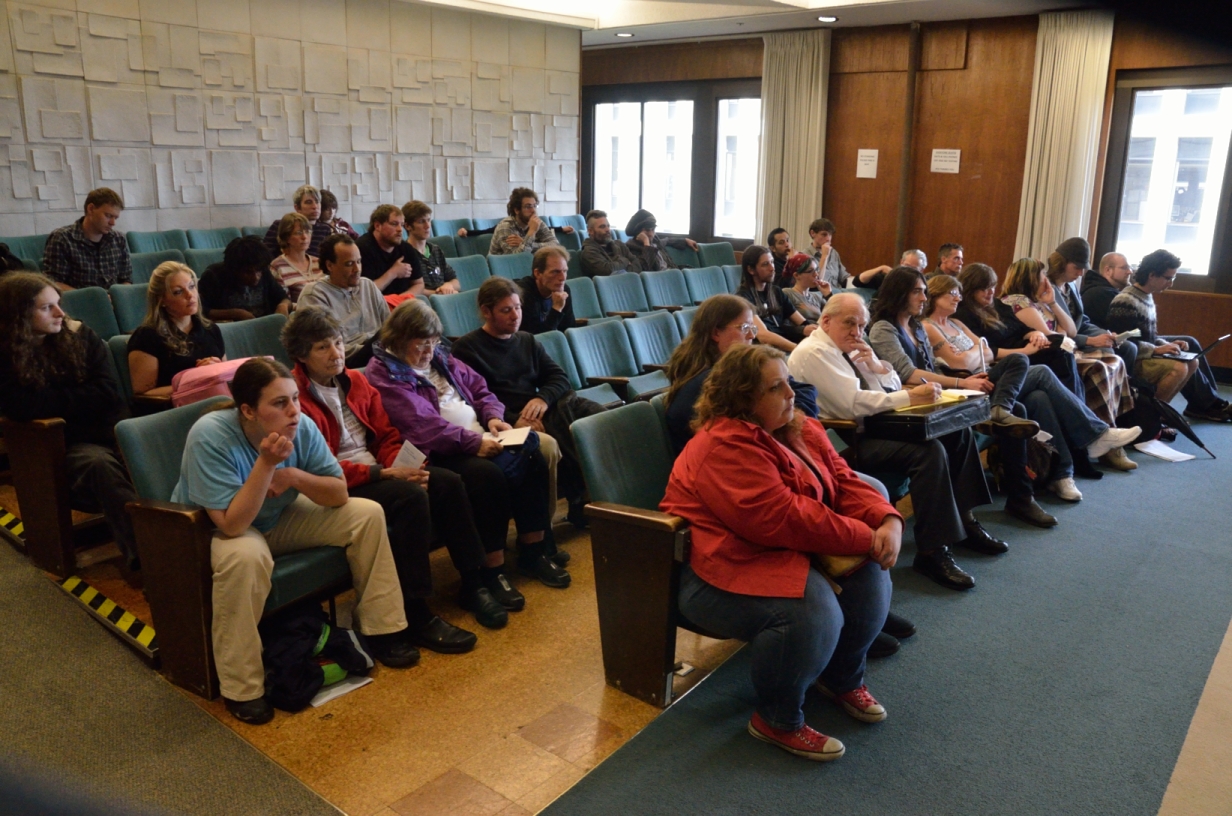 Occupy defendants in court. 81-year-old Jack Mungeon is seated in the front row. Photo by Paul.

On Monday, Occupy defendants, including 81-year-old Jack Mungeon, arrested as a bystander to an Occupy protest, again appeared in court while Judge Albrecht heard motions related to the more than 70 Occupy “violations” cases (cases dropped from misdemeanor to violation status and/or to traffic violations). Since the last hearing, Albrecht issued a written decision on the motion to compel discovery, an important ruling that outlines what information the DA’s office must provide defendants. No new decisions were made today, but Albrecht plans to have written decisions on today’s motions by the next hearing date, May 21st.

The long-awaited hearing on an extensive constitutional rights motion, written by attorney Peter Castleberry on behalf of defendant Angela Hammitt, was delayed once again when Deputy DA Brian Lowney asked for a lengthy set-over. Lowney argued that he will require up to two days of testimony for each major arrest event to counter Castleberry’s motion. Judge Albrecht set up a loose schedule of briefings related to the motion, but did not schedule the hearing itself which may be as late as August.

A few motions related to particularities of individual defendants’ cases, but the major motions pertained to the way the DA modified most defendants’ charges mid-prosecution. To recap, in February Albrecht issued an important ruling granting defendants the constitutional rights at trial normally given criminal defendants, even if their charges were dropped from misdemeanor to violation status. However, she excluded Class C misdemeanors dropped to violations (such as trespass) from rights to jury trials and court-appointed attorneys. The DA responded with an end-run to attempt to avoid granting defendants their rights at trial. For defendants who had class C charges as well as class A or B, the DA dropped the A or B charges. For those who had no class C charges, they dropped the A and B charges and issued traffic citations instead.

One motion was a demurrer (motion to dismiss), argued by attorney Richard McBreen representing John Saunders, pointing out that all traffic violations in Multnomah County must be initiated by either a police or citizen witness–the DA’s office does not have authority to issue infractions. Therefore, those defendants whose charges were dropped and replaced with traffic violations should have all charges dropped. This would apply to those arrested on Main St. on October 13th as well as several isolated cases. 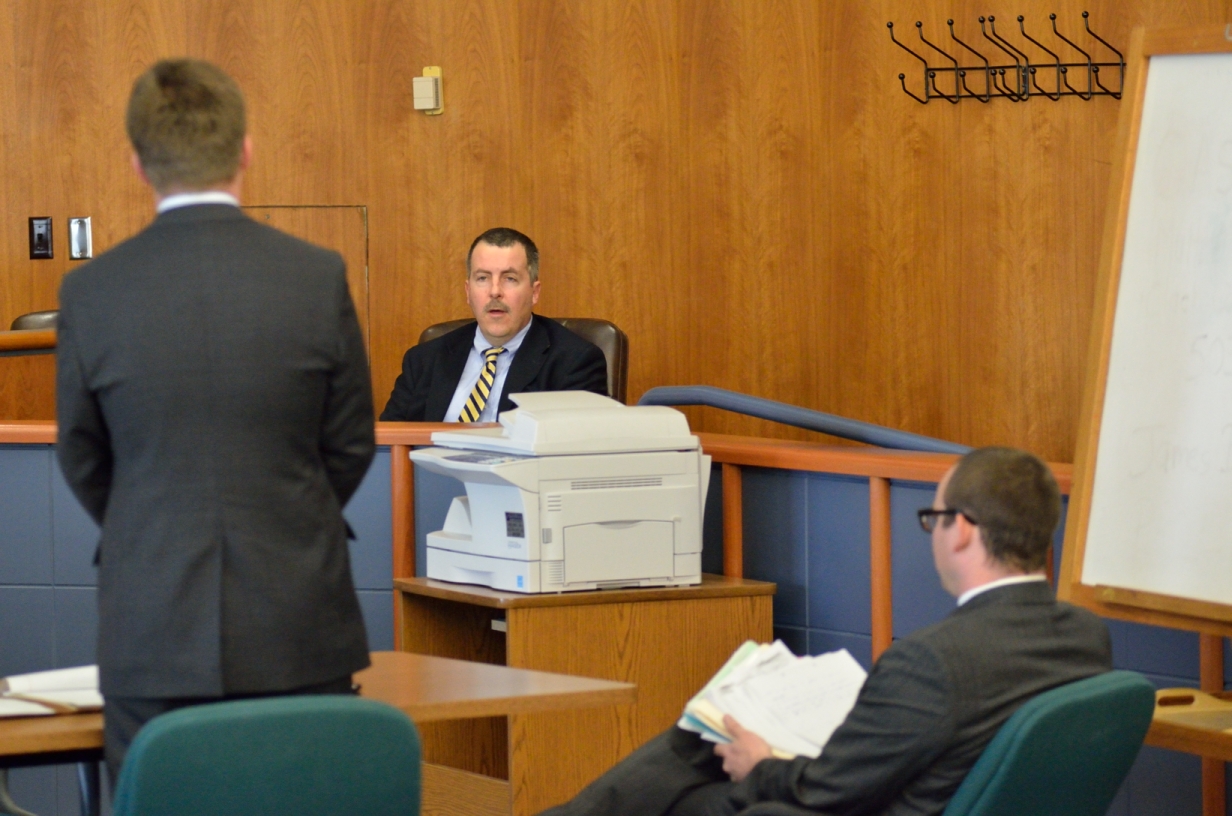 Another motion heard was referred to as the “Savastano” motion after the case law to which it refers. This case says that the DA’s office has to have a policy for how it issues changes to charges. Several defense attorneys argued that the only relevant policy the DA’s office could provide (which they only did today in court, despite multiple earlier requests) does not appear to cover the circumstances of our cases nor does it specify the decisions the DA made that resulted in defendants not being entitled to jury trials or court-appointed attorneys. In an interesting twist, Jeff Howes, Senior Deputy DA and supervisor for the misdemeanor trial unit, took the stand to defend at length the DA’s policy, or lack thereof. The only relevant policy about dropping misdemeanor charges to violations was issued in 2010 with the explicit intention of saving costs. Defense attorneys pointed out that the charging decisions made about Occupy defendants appear to be ad hoc, not guided by policy. Since there does not appear to be a valid policy in place, they asked Albrecht to dismiss the cases.

Attorney Lee Berger, representing Caitlin Wilson, further argued that given the way Albrecht’s February 6 ruling (distinguishing class A and B from class C charges) resulted in uneven results for defendants with similar cases, she should revise her ruling and grant full constitutional rights at trial to those with class C charges as well.

Finally, attorney Thomas Freedman, representing Mario Haro and myself, argued that Albrecht had the discretion to not allow the DA to drop the A and B charges when attorneys and defendants objected to it in court. “What it boils down to is that defendants were deprived of constitutional rights at the almost unfettered discretion of the DA,” Freedman said. He cited case precedent in which the social significance of the case was given weight in determining rights at trial. Since Occupy defendants were arrested in the course of exercising our First Amendment rights, these are not “garden variety misdemeanors.” Oregon statute requires that the dismissal of charges must be in the “furtherance of justice”. Deputy DA Lowney retorted that there are many valid reasons for dismissal, such as saving resources, not just “furtherance of justice”. Freedman responded that while there may be many reasons, they must all meet the standard of “furtherance of justice” and that even saving resources could arguably be in the furtherance of justice if it would allow prosecutors to focus on more serious cases; however, if they were truly concerned about expense, they could have simply dropped the charges by now. Freedman further argued that given this misconduct on the part of the DA’s office and the judge’s failure to disallow it, either the cases should be dismissed or the class A and B charges should be reinstated, along with full constitutional rights at trial.

Judge Albrecht promised written decisions on today’s motions by May 21st. When asked whether defendants without attorneys are required to be at every hearing, even though not all the motions are relevant to everyone’s case and it’s very difficult to hear any of the proceedings from the audience seats, Albrecht said that yes, defendants are required to appear. If they cannot, they can ask her in advance for an exception. Those who were defaulted for not appearing at previous hearings, but who never received notice of the hearing (only a fraction of defendants appear to be receiving the notices), should follow the procedure to “vacate” the default decision. Call the ELK/NLG legal hotline at 503-902-5340 for guidance. 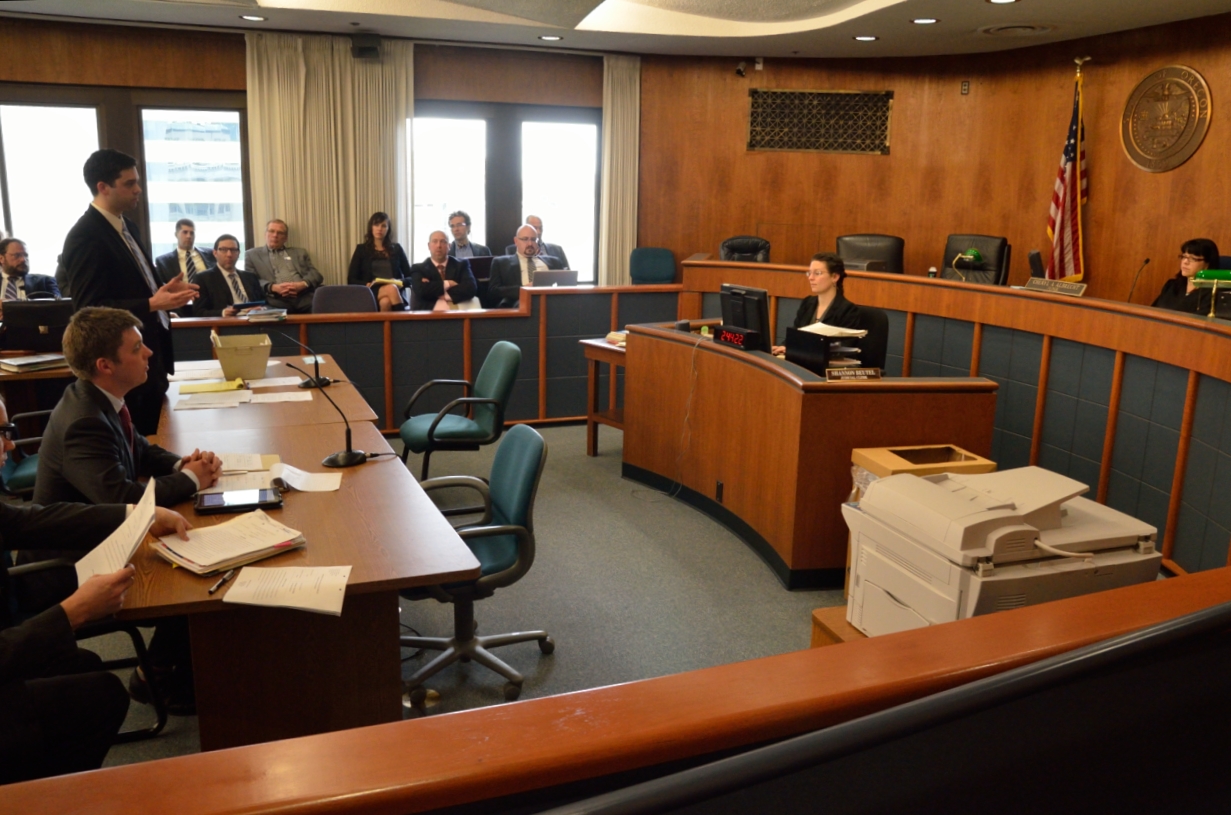 4 comments for “The Fight for Constitutional Rights at Trial, Continued”