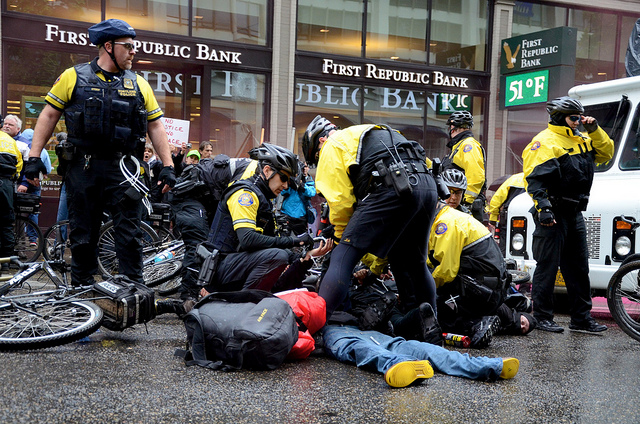 My name is Victory and I participated in the unpermitted march on May Day. I wanted to offer a critical perspective on the effectiveness of the day from a fellow Occupier. I realize Occupy receives plenty of flack from all sides. The Portland Occupier is a space to publicize our side of the story and the more positive aspects of the movement that don’t receive enough attention in mainstream media. However, I do feel it is important to share my thoughts. I would like to hear yours in return. My letter is as follows:

May Day is an important day for workers, unions, and immigrants. It marked the day in 1886 when workers across America held a general strike and demonstrations in support of the eight-hour workday. The Chicago Haymarket affair occurred in days that followed, beginning when workers were shot and killed by police. It is a day to honor those people who courageously stood up for the rights of themselves and others, despite the fact that it cost some of them their lives. On this day, many gather to raise awareness of the history of workers’ rights, rally for support on modern-day labor struggles, and show solidarity for workers world-wide who are subject to unjust treatment.

However, in light of the recent Occupy Portland march held on May Day – and there was more than one march this day, I am only focusing on a particular one – I am a little disillusioned by the spirit of the participants. Almost immediately, there was police confrontation. Police moved to arrest and brutalize marchers who chose to remain in the street. This riled up marchers, leading to further disobedience from some of them, which escalated to further arrests and brutalities, as well as deployment of chemical weapons. Some of the arrestees were also noted by witnesses as being on the sidewalk when arrested.

I do not in any way condone the unnecessary violence, intimidation, and arrests carried out by the police during this march, nor approve of the undoubtedly exorbitant use of tax dollars to deploy riot cops, chemical weapons, and helicopters against peaceful protesters. What I am opposed to is the fact that this May Day march and its preceding rally seemed woefully devoid of focus on radical history and labor rights. Most of the chants I heard were anti-brutality, anti-police, and “Whose streets? Our streets!” There was a stop at Pioneer Place in which marchers repeatedly chanted “Strike!” Despite this, however, there were no speeches or signs that I saw that could explain to the public the original purpose of the demonstration. May Day is such an important day in our history, and to see it go virtually unmentioned during a May Day demonstration is embarrassing. Not only that, but failing to honor the history of radical movements that have struggled for the same freedoms we do now delegitimizes our movement.

What about the 2011 Wisconsin protests to protect collective bargaining when those rights were threatened by Governor Scott Walker, and the subsequent loss of education jobs when the Wisconsin Budget Repair Bill was passed? What about the lack of federal employment protections for LGBT people or discrimination protections regarding gender identity? What about the continued wage gap between men and women? What about the use of international sweat shops and child labor in impoverished regions to create American corporate products? What about the Foxconn factory in China, which erected suicide nets outside the factory after fourteen employees killed themselves over the factory’s harsh conditions?

I feel the issues mentioned above deserve priority over police telling us where we can and cannot stand. Sadly, it’s the latter that earned the energy of the marchers and the sensation of the media. As a result, a valuable opportunity to shed light on working class struggles was lost. This distraction from the spirit of May Day is tragic. Furthermore, it appeared largely ego-fueled. Autonomous actions affect the public perception of entire movements, whether we like it or not. I heard an activist once say, in regards to non-violent civil disobedience, “Arrests are precious. Make them count.”

I support the Occupy movement and am truly grateful for all the people who chose to get out there on May Day and make their voices heard. I just feel that, after so much opposition from politicians and police, it becomes too easy to forget our primary goals. Occupy is not out there just because the police disrupt its actions. Occupy started to resist the influence of corporations on our government and our daily lives. May Day is a day for Occupiers to consider how the state of our government is affecting workers. Don’t let the opposition distract you from what matters most. Stay focused, stay organized, and stay strong.

4 comments for “M1: A Letter Regarding the May Day March”