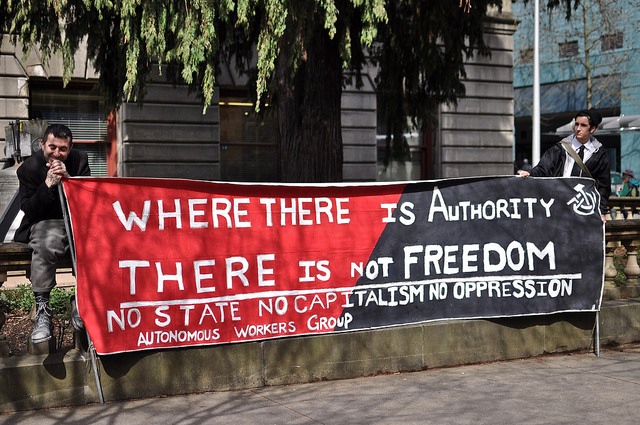 “The notion of “policy” presumes a state or governing apparatus which imposes its will on others. ‘Policy’ is the negation of politics; policy is by definition something concocted by some form of elite, which presumes it knows better than others how their affairs are to be conducted. By participating in policy debates, the very best one can achieve is to limit the damage, since the very premise is inimical to the idea of people managing their own affairs.” – David Graeber

It’s 2012. It’s an election year. It should be obvious by now that the many individuals and groups who have plugged into the Occupy Movement over the past half year are a very politically-interested set. We really need to talk about the elections. Moreover, with the May primaries just weeks away, with the Willamette Week rejecting the seriousness of Portland occupier Cameron Whitten’s bid for Mayoral candidacy–in their words, “We think Whitten stands to accomplish more as an activist than as a politician”–and with the ever present threat of Co-optation of Occupy Portland’s aims and energies by the very power elite who wish to dilute and destroy our message, we can’t really avoid having this discussion. With this in mind, I would like to suggest a few important things to consider over the course of this year.

1) There has never been an elected official in the US who has effectively stopped the encroachment of corporate power upon American life. Some Libertarian party folk point to Andrew Jackson as an example of a historical politician who stopped central banking in the
US, as an example of some supposed glory days of when American leaders had the backbone to resist the hegemony of anti-democratic power (an irony considering Jackson’s simultaneous treatment of indigenous peoples of America’s South land); however, empirical evidence would suggest that 175 years later, Jackson–like every other American politician before or since–ultimately failed to create a substantive historical shift that might have contributed to anything like a democratic society in the here and now. If we operate from the premise that it is real social change that we want, and not merely limited concessions and moralistic lip service, then there is more than ample evidence that accomplishing this through electoral reform will get us only so far, at best, and, at worst, nowhere at all.

2) When your enemies are writing the rules of the game, it is reasonable to refuse those rules. If you accept the premise that corporations have bought our democracy (and now stand to make billions from political speculation), you have to consider that the rules which those bought officials create for themselves are inimical to manifesting real political change within the margins allotted political operatives. Even before we consider the counter constituencies that have swallowed the narratives crafted by the corporate hegemons to promote their political agenda, we have to consider that the role of our elected officials may be far too limited in scope to effectuate the kind of changes we seek to institute in our society. In fact, it may very well be counter-intuitive for many politicians to create the changes which drive the demand to put them in office.

We see very similar manifestations of this in the social services, the prison-industrial complex, and the ever expanding military. If social services were successful, wouldn’t more social workers be out of a job? If crime rates are constantly going down, why do we keep spending more money on Police and building more prisons? If we are the dominant military force on the globe, why does “defense” spending keep increasing? This very same question could be lobbed at our elected officials: If our elected officials engendered the advancement of a truly democratic society, why would we need to keep them?

3) If we are to effectively work together toward our common political goals, we must move beyond zero-sum political games. Let’s face it, we operate in a winner take all, majoritarian electoral system. While plenty of other ideas, such as Proportional Representation or Instant Runoff Voting, have been advanced, we don’t have them yet. So long as this remains the case, anybody who votes for any candidate does so at the expense of all other candidates for whom they are not voting. Subsequently, any public support for any individual candidate, is a public detraction from all opposing candidates.

That’s fine, when we all agree on things. If the elections were a simple matter of voting 99% vs. 1%, we would probably have no problem coming to consensus on which party we endorse as a movement. The fact of the matter is, however, that Occupy is a lot more dynamic than that. In the past six months of Occupy Portland, I’ve met Democrats, Republicans, Greens, Progressives, Independents, Ron Paul Libertarians, Marxists, Anarchists, Leninists, Trotskyists and people from a wide variety of other political persuasions. For all of us to agree to support ANY candidate at the expense of all others is absurd.

I’m not saying that individuals within Occupy can’t support political campaigns. At the end of the day, though, I will not be voting this year. I don’t really care who anyone votes for–or if they vote at all. While we have ample opportunities to work together without undermining each other’s work, the elections do not represent such an avenue.

Obviously, this is only one perspective on a very dynamic issue. Ultimately, the discussion will continue in the weeks leading up to the Oregon primaries, and in the run up to the November election. As we continue our fight against the onslaught of the 1% against popular liberty and self-determination, it is important that we recognize the necessity of this discussion.