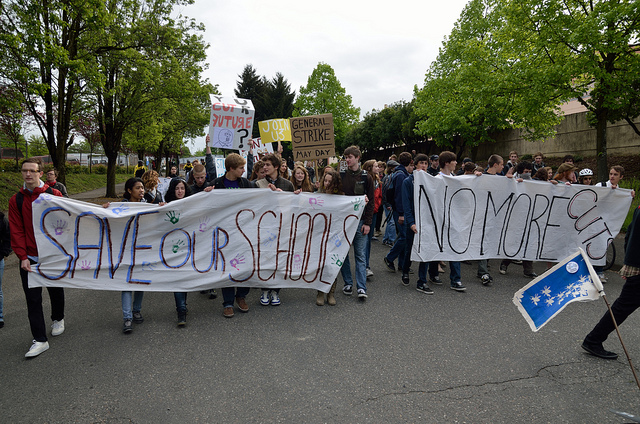 Since the Great Recession began as a result of the avarice and criminal behavior exhibited by those in the banking and mortgage sectors, one of the vital segments of our society in the United States that has suffered is the student population. Year after year, as tax revenues dried up in states and municipalities, more and more teachers have lost their jobs, and schools have closed. Arts, literature and sports programs have been decimated. These cuts are continuing unabated and appear to be accelerating. The Portland Public School district is no exception.

In 2011, Marshall High school closed and the district laid off almost fifty teachers for the 2011-2012 school year. Superintendent Carole Smith recently announced the planned closing of the Humboldt elementary school and the Harriet Tubman Leadership Academy for Young Women. She also announced that another 110 teachers are slated to be laid off next year.

Early in the morning of May 1, shortly after sunrise, several hundred students from the Portland district provided a lesson in Democracy to administrators, when they declared enough is enough and rallied outside of the Portland Public Schools District office on Dixon street in NE Portland. Their goal was to speak to administration and voice their concerns over the proposed cuts–cuts they know will diminish their opportunity for a quality education, leaving them ill-prepared for a productive future. Instead of meeting with administration, they met a line of police officers who refused them access to the property. Unable to speak to administration and voice their concerns, the students–ignored by the government that purports to serve them–decided, like so many in our society today, to take to the streets in an effort to make their voices heard. Although the protest was organized by a small group, the marching decisions during the two and a half hour march were made by consensus.

The students, accompanied by a few parents and community supporters, first marched around the district office neighborhood and past the Harriet Tubman school slated for closure. Ironically, the school that soon will lock its students, locked them in on this day, preventing all but a few students who sneaked out a side door from joining the march. When interviewed, several of the students who managed to escape explained that they joined the march because they do not want their school to close. They feel that the all-girl school provides them with an opportunity for an education that they might otherwise not have. One articulately explained how the environment has helped to bring some of the girls out of their shells.

After returning to the district office and again being denied a chance to voice their grievances to administrative staff, the students decided to “take a bridge” and proceeded to march in the street to Broadway. 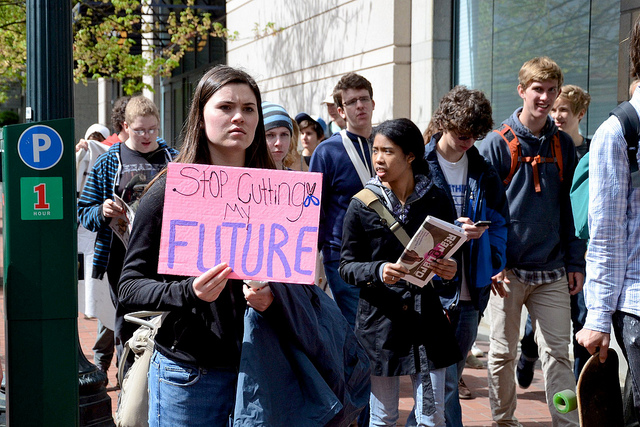 Setting a blistering pace no doubt fueled by youthful exuberance and righteous anger, they crossed the Broadway Bridge into downtown, shutting down all but one lane of traffic. During this phase of the march the students were accompanied by numerous bicycle and motorcycle police and a green command car reminding them that they were on an unpermitted march and telling them to move to the sidewalks. Students ignored the police instructions, even after police began to include threats of arrest. Unlike the unpermitted march later in the day, when protesters taking to the streets were brutalized by police, the students seemed to be treated with “kid gloves” by the very same officers and marched in the streets unmolested. The disparity between the two marches was truly striking.

Winding their way through the city and continuing to march in streets, students eventually made their way to Lincoln high school, which also had been put into lock-down. There the students were met with another police cordon blocking the entrances, preventing any students from leaving the building, as well as preventing some students not involved in the march from entering the building after returning from their lunch break.

Again denied an opportunity to speak to school administration, students decided to retake the streets and proceed to City Hall. After students chanted for several minutes outside the locked doors of City Hall, Mayor Adams emerged and addressed the respectful and attentive crowd.

Having received a respectful acknowledgement from the Mayor, the students returned that respect and agreed to return to the district offices using the sidewalks, so that the police could reduce the the number of officers required for the protest. Upon returning to the district offices for a second time, the students were again denied access to the grounds. After a short demonstration, Superintendent Carole Smith, perhaps following the mayor’s example, or perhaps at the behest of the police, emerged from the building. Staying well behind the police cordon, Smith deigned to speak to the assembled students and parents. (insert video here) Taking another page from the Mayor’s playbook, Smith acknowledged the crowd and then deftly avoided any meaningful dialogue with students and parents, passing the buck on budget problems back to the state legislature. Smith then said she was being called back inside, and students began peacefully to disperse.