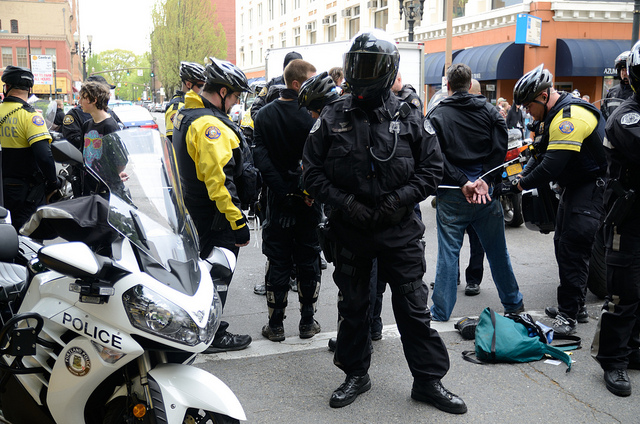 In anticipation of what could potentially be one of the greatest May Day demonstrations in the recent history of North America, major news outlets reported that police departments everywhere were geared up and prepared for whatever the confrontations they were planning on. Special attention should be paid as to whether there was an unusual uptick in the number of inmates released from local jails in advance of the day, as this would be a hint as to how many spaces were being reserved for May Day arrests.

In certain circles within the radical communities, being arrested had become an important “rite of passage” (Yotam Marom, “Making our arrests count,” Alternet April 22, 2012) to prove one’s sincerity and authenticity as an activist. Like the Japanese yakuza culture, every stint in prison earns a brownie point that leads to greater street cred and influence, and one receives a hero’s welcome upon being released from the jail to an awaiting committee of solidarity and support.

For those who can risk and throw themselves into the hands of brutal and violent state-thugs, I have nothing other than the greatest respect and admiration, and I say thank you.

However, I am also disturbed, from time to time, as the Occupy movement increasingly radicalizes itself away from what it once used to be, once a decidedly more diverse and inclusive one — and every time the organizers seem to be trying out for an even greater degree of physical confrontation with the police, business establishments and others. I feel uneasy by their seeming insistence on using indiscriminate and aimless “civil disobedience” as a wildcard weapon, for instance, insisting on having marches without permit and with no prior announcement on their routes. By definition, a civil disobedience is a defiance of unjust law which one sees to be illegitimate, immoral and unethical to cause society to reassess the morality of unjust laws (cf. “Civil disobedience,” Stanford Encyclopedia of Philosophy). Public encampment as a demonstration against inhumane anti-camping ordinance, for instance, counts as a bona fide civil disobedience under this definition, and so is setting up a massive free food operation in defiance of the economic and political system that causes hunger in ostensibly the wealthiest nation on earth. But the Occupy movement is not about marching in defiance of anti-marching laws. Unnecessary confrontations, unnecessary casualties, and unnecessary inconveniences are shifting people’s support away from the Occupy movement. I fear that, in this wave of radicalized actions after another radicalized actions, the movement is distancing itself from the very 99 Percent it purports to speak for — and becoming yet another reincarnation of the anti-WTO and anti-Iraq War movements of the past decade: background noises in the urban landscape to which most people feel irrelevant and desensitized. Every once in a while a few get sprayed, arrested, and spend a few hours in jail, but cause no impact in public discourse, people’s consciousness, or public policy.

This also points to the issue of internal classism within the Occupy movement. During the encampment days of last fall, many occupations perceived internal divisions between “legitimate protesters” and “the homeless.” Some accused the latter of being a burden to the community resources and even a distraction from the messages of the Occupy. Many, largely middle-class and well-educated Occupiers loathed the presence of “the chronically homeless” and “the street kids” among them, sleeping all day and eating free food, but seemingly not participating in any demonstrations (never mind that the encampment itself was a demonstration).

The reality is that it is a form of privilege to be able to engage in confrontational actions that anticipate a massive state repression, with knowledge that one’s consequence for participating in such actions would be limited and for the most part, one would only spend a short time in a holding cell and in the end gets a largely symbolic slap-on-the-wrist, and one can soon go back to the normal life including going back to another radical protests and actions. But for some people, an arrest stemming from direct actions can mean a long time in prison, forced exile abroad, a torn-away family, or loss of livelihood.

Let me demonstrate this point by giving some specific examples.

If you plan on direct actions and getting arrested:

(1) You’d better be single and without family obligations. Do you ever have to give a thought as for who will watch over your children if you are arrested, not knowing how long you might be in jail? Do you ever give a thought, if you are the sole breadwinner for the whole family, then who will support your spouse and kids while you’re incarcerated? Do you have a close relative who can take care of children? If not, are you prepared to have your children taken away by the state foster care system?

(2) You’d better be healthy, able-bodied, and not dependent on specialized medical attention. Medical care in jails is notoriously poor and does not have continuity of care from the outside. One has to go through a heck of ordeals and bureaucratic hoops to receive vital medical care when you’re in jail. Good luck if you need dialysis, have diabetes, or you can only survive if you take 45 pills every day.

(3) You’d better be a U.S.-born American citizen. It does not matter if you are undocumented or a permanent legal resident. All non-citizens and those who are suspected of being a non-citizens are on the radar of the U.S. Immigration & Customs Enforcement (ICE) as soon as they are booked and their fingerprints submitted to the FBI for cross-referencing. The ICE Secure Communities program has thus far deported both undocumented and long-term legal immigrants for as small an allegation as a traffic infraction (conviction not necessary), and in some cases even U.S. citizens have gotten mistakenly deported. Whereas a U.S. citizen Occupier may be released after a few hours in a holding cell, an immigrant Occupier may instead see an ICE van waiting for their release so ICE can immediately take custody of the Occupier (regardless of convictions or dropped charges) and into deportation proceeding at a detention center owned by GEO Group or CCA hundreds of miles away. If the immigrant Occupier is lucky enough to be released to the street, they are not entirely off the hook, either. A conviction for property destruction, for instance, may qualify as a crime of “moral turpitude” which would immediately result in deportation even if it is a non-felony and non-jailable offense.

(4) You’d most likely better be white. As the April 24 Free Bradley Manning demonstration in Beaverton, Oregon, amply demonstrated, police tends to target the people of color far more often than those who are perceived to be white and middle-class; and the state-sponsored violence is primarily targeted against the people of color. This means a Black or Latino protester is more likely to be brutalized by the police both on the street and in jail.

(5) You’d better be someone with economic privilege, who can survive without public assistance. Outcomes of most criminal cases in the U.S. depend on one’s ability to afford a lawyer. Those who are on certain public assistance can lose it if they have any kind of criminal record, which, in the U.S. include mere arrests and even dismissed or acquitted charges.

(6) You’d better be someone with job security. Are you able to keep your job after a high-profile arrest with your mugshot on evening TV news, and missing a couple days of work while you are in jail or in court? Do you have a labor union protection against unlawful termination, or have a lawyer who can help keep your jobs if your boss decided to fire you? Do you have other job prospects so you can find another way of generating income if you ended up losing your job?

(7) You’d better have clean or semi-clean (non-protest-related) criminal records, and certainly not on probation or parole. You should not be protesting if you are on probation. Generally, “any violation of law” while on probation constitutes a violation of probation or parole. Participation in an unpermitted march may land you back immediately in prison if your probation officer sees you on TV or Livestream. Also if you ever have even a slightest suspicion that you may have an old outstanding warrant for anything from anywhere, you really need to watch out; you’d also better have had financial means to pay any past traffic tickets, court judgments, fines and other judicial obligations, as outstanding fines and judgments can result in imprisonment and/or extradition to where they originated.

(8) You’d better be a male, and straight, and look straight. Sexual and physical violences in jails committed by guards and inmates are serious societal problems even after the passage of the federal Prisoner Rape Elimination Act (PREA). Women and LGBTQ inmates are likely to be assaulted, harassed, and even raped while in jails.

(9) You’d better not be a member of persecuted or prejudiced-against social, cultural or religious group. Are you a Muslim? A Jew? A Sikh? A Rastafarian? Certain cultural stereotypes often determine the conditions of one’s treatment by the police and by the judicial system. In some cities such as New York, the police is known to openly target Muslims in the name of “counterterrorism.”

(10) You’d better not be unhoused, or someone who is living in a shelter or “transitional housing.” Due to the perceived “flight risk” and difficulties in tracking, unhoused arrestees are far more likely to be jailed for a longer time or have their bails raised or denied. Those who live in a shelter or a transitional housing has additional concerns about losing their place due to their absence from the facility (and in some cases, an arrest and a criminal charge can be sufficient grounds for termination) and it would take months and even years to get back into the transitional housing program once they lose it when they are released from jail.

What do all these leave us? With constant specter of heavy police repression, only those who possess enough privilege to feel confident that participating in direct actions would take active part in the radicalized Occupy movement. Single mothers, people of color, immigrants, unhoused folks, low-income people on public assistance, people with limited physical abilities or with medical conditions — the very kinds of people who experience daily the heaviest burdens of oppressions — are alienated and kept away from the Occupy movement. It is unfortunate that even in the purported radical and progressive communities, privilege plays a big role in forming its narratives — and those privileged people who can afford to protest are respected as heroes and genuine Occupiers while those who have no such privileges are often viewed with contempt and suspicion as though they are somehow at fault by not being part of the most radical and confrontational elements of the Occupy movement which seems to be leading the agenda ever since we have left the encampments.

While I highly commend your courage and passion for the protest, keep these in mind before exhibiting judgmental attitudes toward those who may not necessarily be as actively out on the direct actions; those are the people you should be fighting on behalf of.

9 comments for “The Privilege to Protest: Hidden Classism and Ableism in the Radical-Left Movements”